Today we had a better look around some of the shops. Tilly has a favourite wet food of the pink variety in gravy, this is proving to be a rare thing in Wales along with a few other bits and bobs. So we walked to the Co-Op to see if they would help fill the gaps, they had gluten free bread at nearly a pound cheaper than the wholefood shop, but that was the only thing to cross of the list, so maybe not worth the walk. We bought a loaf for the freezer and it will do nicely for stuffing and bread sauce next week. 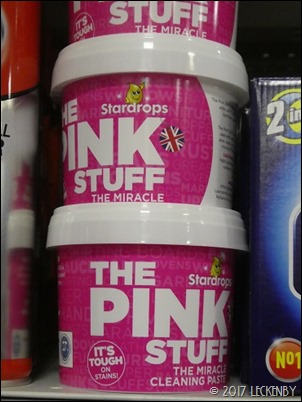 Stan’s was checked out next, here they do a meat version of pink cat food (other cat foods are available in abundance) in gravy which Tilly will have to cope with, at least half the box is the same as her preferred box! In the cleaning section we spotted tubs of Pink Stuff, which should be in every boaters stocking. The Post Office is in Stan’s but I decided to leave asking if anything had arrived for us as we are due our next known parcel there tomorrow, so instead we headed to the Enquiry Office next door. 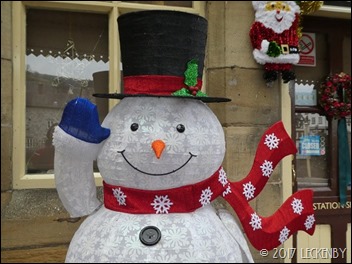 My bestest friend Emma in Australia had ordered something from Amazon which was due to be delivered yesterday, it hadn’t arrived then (or so we thought!) so today it was worth checking. We climbed the steps, rang the bell at the counter and waited. The same cheery face greeted us that we’d seen yesterday. One parcel I’d ordered had arrived by Hermes (not taken by the PO), it had however been signed for but no-one could find it originally. It turned out that my Post Restante had all been beavered away in a high up cupboard in Stan’s that only one member of staff knew about. This chap, Paul, asked f we’d managed to find it as he’d had a check through his parcels too. Today we were only expecting one parcel, from Emma. I showed my driving license, but no nothing here, ‘Sorry’.

Paul then went through the few parcels under the counter that had come from Amazon and read out who they were for. ‘Bevan’, ‘Jones’, ‘Snowden’, ‘Rhydderch’. Hang on did he just say Snowden? Would that be Emma Snowden? Well yes it was. We all agreed that this parcel was almost certainly for me, maybe Emma was planning a trip over from Australia to deliver it herself. Or somehow she’d forgotten to put my name on the address. Some form of proof was needed for Paul to be able to hand it over to me. He went off to scan the bar code to see if it came up with her home address, which I could tell him, sadly this didn’t work. If I could get the tracking number then he’d happily hand it over. But despite a text and a messenger, Emma was sound asleep in the southern hemisphere. It would have to wait for tomorrow, at least nobody else would be able to pick it up!

Another couple of pet shops were checked for pink food, but none came up trumps. Everyone was very helpful, if we called before Friday Carol would get us some in next week. Tilly will be making do with what we can get and certainly not moving onto the more expensive foods that Houdini was allowed in her last few months! Porters deli came up trumps with a few bits we’d not managed to find elsewhere, so I can do my usual stuffing and a slightly healthier version of bread sauce. The array of cheeses was vast, we’ll definitely be returning later this week for a few bits of Christmas treat cheese.

Two pairs of glasses were mended whilst we waited at the opticians at no cost. A very productive trip into town, apart from the parcel! 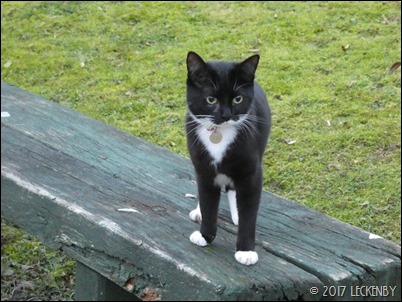 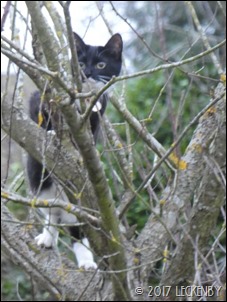 Back at the basin more boats have arrived. Tilly spent much of the afternoon running around like a loon and declaring the basin hers. Mick got on with adding to our Christmas lights. The new set nearly do down both sides of the roof and the shorter set are now wound around inside the pram cover. Oleanna most definitely has the best lights in the basin. Tomorrow I’ll see if I can make us a wreath for the cratch window as the huge expanse of glass is crying out for one. I think I’ve spotted just what I need along the track behind the basin. 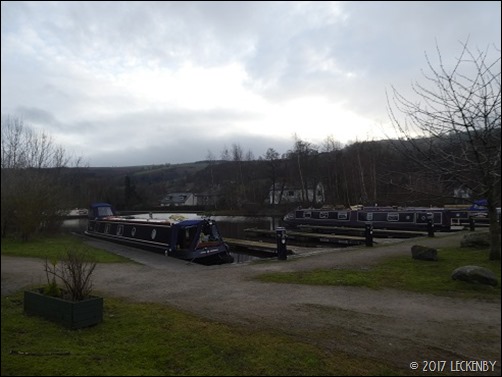 Mick also spent a bit of time today playing with our TV aerial. Moving it along the cabin roof, gently twisting it’s orientation and we now have some TV. ITV is good, BBC not quite so, but we may be able to watch Dr Who on Christmas Day, fingers crossed.