It must have been the canal basins Christmas do last night. The comedian was obviously very funny as all the Mallards were splitting their sides well into the early hours. 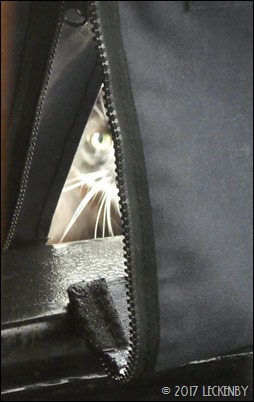 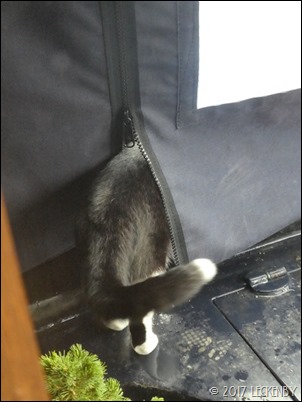 As we had breakfast Tilly set off to explore the basin surroundings, it being a wet morning she was well in her element. Only I can get through my flap.

Mick headed into town for a couple of things and I stayed in the warm. Our Alde boiler has now been programmed to come on first thing, no need to patter across a chilly floor to press the on button. Being plugged into the electric has it’s advantages, our boiler can work off electric as well as gas. So whilst we are here the central heating will be working during the day and we’ll only light the stove on an evening for extra cosiness and atmosphere. This also has an extra advantage, we can get the chimney swept and give the stove a good clear out.

Whilst out Mick had been into Watkin and Williams to see if they might be able to deliver us some coal and gas before Christmas. NB Mountbatten is currently on a coal run, but they doubted that they’d be able to make it right to the basin this time. Too much weight on board to get through the narrows most probably. With stoppages starting soon after New Year we’re not sure what NB Mountbatten is planning on doing, so we thought it best to stock up rather than run out a week into the new year. Mick was told to phone in the morning but there shouldn’t be a problem with a delivery. 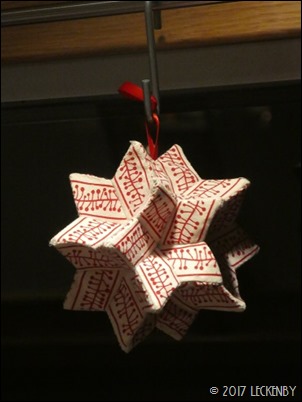 It was now time to start making Oleanna Christmassy. Mick set about putting lights around the outside of the cratch, but ran out of time to do the stern whilst it was still light outside. Indoors I dismantled the top shelf of one of the cupboards so as to get the Christmas hamper out. The hamper was a present from Finesse when we moved on board, all the contents have long since been consumed, but the wicker basket has become our Christmas hamper, full of stockings and decorations.

My 3D patchwork stars came out along with thin tinsel and baubles. Ikea the other week had provided us with a few more decorations so that the bearded elves could go in the bin (Tilly had done her best to give them all afro beards last year!). 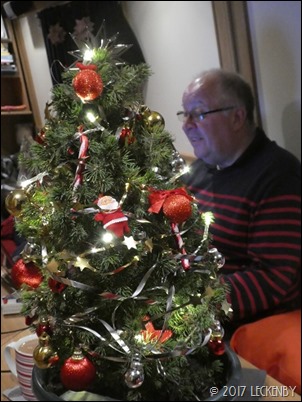 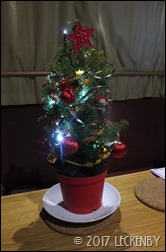 With the tree brought inside I could start to decorate it. I bought it back in Newark 2015 from the market. It has been repotted once since then and seems to like life in the cratch. Just a shame it has developed a bit of a list despite being turned every other week. A few more decorations and lights to go up and Oleanna will be ready for her first Christmas.

They really think I’m stupid, having to light up our boat to guide me home! But there are lots of extra toys to play with inside now, all shiney and they make a great noise as they hit the floor.