Not the quietest mooring here, but only a couple of cars woke us during the night as they sped past. The canal was just as busy this morning as we had our breakfast, a group of canoeists arrived and set off paddling from in front of our bow. We hoped that this would be all the traffic we’d see today. 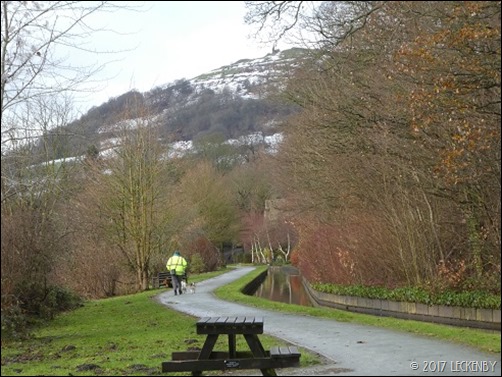 The last two miles into Llangollen has several stretches of very narrow canal, some only as wide as a narrow lock. One stretch has passing places, handy for when you meet the trip boat coming the other way (from past experience we were the ones who had to get out of the way!). So I walked on ahead with walkie talkie and phone in my pocket. Unfortunately the walkie talkie had very little battery and ran out just before I got out of view from Oleanna, so we would have to hope our phones would work should they need too.

A nice lady walking her dogs offered me a lift in her car into Llan, which I turned down, ‘Better stay with the boat, but thank you’. 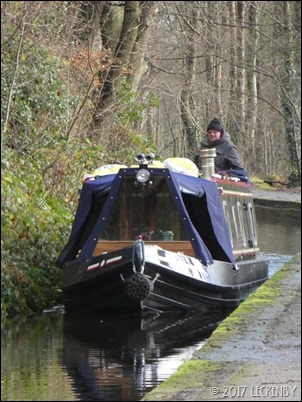 I walked steadily ahead and soon lost sight of Oleanna who was following slowly behind. The shallowness and narrowness along with the flow made it very slow going. The faster the throttle the lower the stern goes, the less water there is to help move you along, so counter productive. Gliding along in neutral works until the flow impedes your progress. So all you can do is take it steady and be patient as snails overtake you. 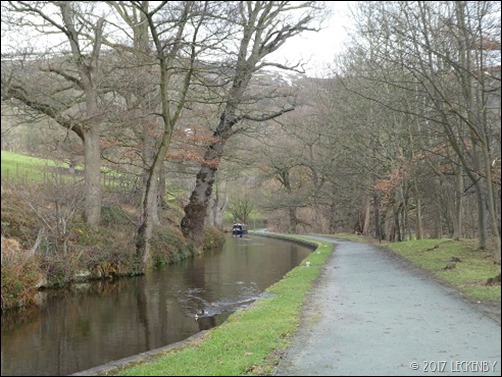 The canal clings onto the side of the valley for these last two miles as snow topped hills start to surround you. All very pretty. Llan had so much snow last weekend that it was cut off for a while, but the rescent rain has washed most of the white stuff away now. Haunting choochoo noises were echoing along the valley from Llangollen Railway all very atmospheric. 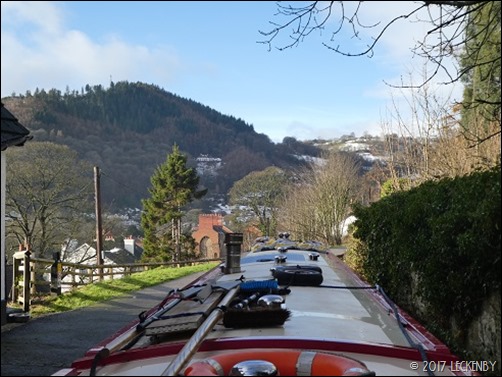 When we reached the on line moorings I hopped back on board, there only being one more stretch of narrows. There was space amongst the Winter Moorings should there be nowhere for us at the basin. We were surprised that the trip boat was ready to head off and as we approached the turn into the basin we could see the bow of NB Yarwood pulling out. If we’d have taken more time over our cereal we’d have met both of them! 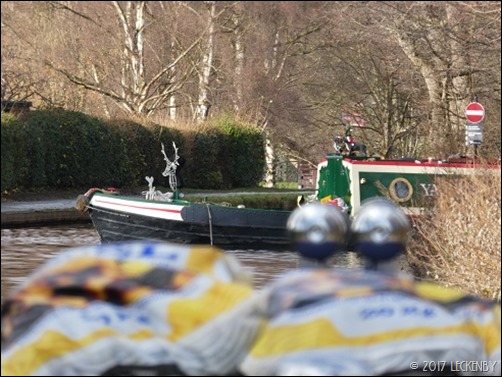 Entering the basin there were four boats already moored up. The space where NB Yarwood had been was free, but two boats nearby were hooked up to the post. We headed into a gap, leaving space either side of us and the other boats. This was pot luck as to whether we’d have power, but a little red light gave us hope. 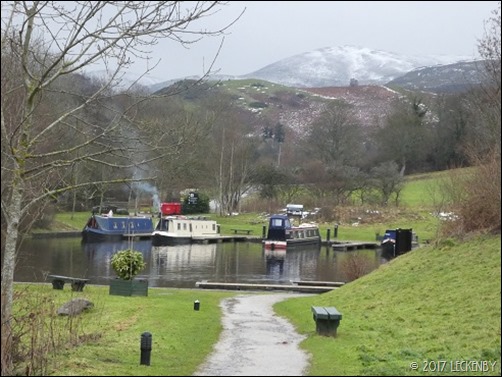 Out of character for us once we’d plugged in the washing machine didn’t go on! In fact it waited for us to have lunch, head into town to relieve the Post Office of any parcels that had arrived and have a look round. Newspaper bought, three parcels collected, wholefood and other shops checked out we headed back to the boat to put the first load on. We plan on being here for quite a while, so there is no rush. The River Dee was gushing along, it is normally quite lively but with the added snow melt it was quite aggressive today. The railway was busy, Santa specials were going up and down the valley packed with kids each one leaving with a present in hand from the man in red.

Back at the peace and quiet of the basin Tilly was allowed out to explore just as the heavens opened. This made it all especially good. They were worried that I’d not know my boat with it just pointing at the land. They are stupid, of course I knew which was home! Just someone had removed the towpath from most of the side. Good job we have the cat walk so that I could get to the back to let them know I was home in the dark. We’d left a door into the semi trad open as I knew she’d insist on returning to the stern as she usually does despite being told to use the bow!