This morning I caught a bus back to Ellesmere. This wasn’t quite as easy as it should have been. With one bus heading to Oswestry an hour you then have a choice of two buses to take you on to Ellesmere. One with a connection of 9 minutes the other getting on for 45! On a chilly day the less time spent waiting for buses the better, only problem was the first bus was running late! All the passengers knew each other as the driver did his best to catch up on time, speeding round bends and standing on the breaks when needed. One chap didn’t seem too impressed with the driver or having to stop to pick up more passengers, some of the words he was mumbling under his breath I haven’t heard for a very long time.

Still running late I decided to hop off at St Martins opting for the longer wait, but at least I wouldn’t miss it. Then Google decided that I had just missed my connection and there was getting on for a hour wait! But doing things the old fashioned way, looking at the time table on the bus stop, I discovered the bus service was every half hour not hourly. But this bus was also late, at least the sun had come out and there was a bench to sit on. 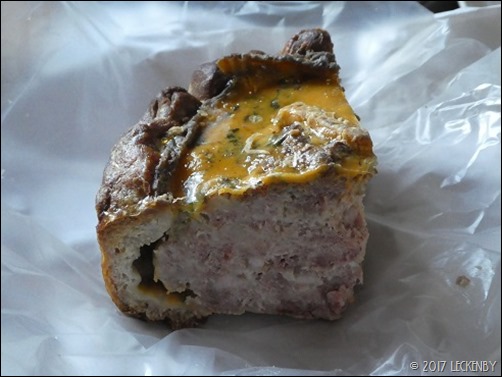 The bus driver kindly stopped outside the Post Office, meaning I had only three paces to get inside and collect my Post Restante . Mission accomplished, well apart from catching the return bus. A strong pull made me cross the road in Ellesmere and somehow a large piece of Shropshire Blue topped pork pie managed to make it’s way into my bag.

Luckily for me the speedy bus driver seemed to have an identical twin brother who transported me back to St Martins at a more legal speed. Due to the buses now running late my connection was a short one. Sat in the same seat was the swearing man. This time he seemed more disturbed by vans parked on pavements and workmen, they obviously deserved the original name for Scope shops! An eventful journey for all of 20 minutes in Ellesmere. 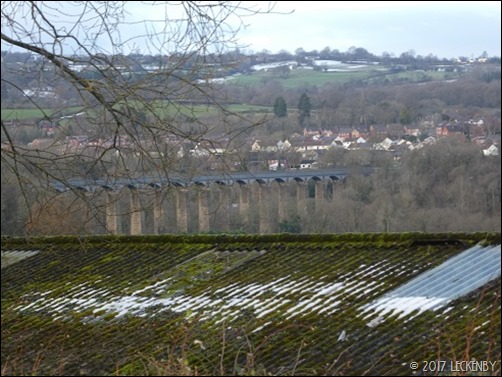 After we’d enjoyed half of the pork pie for lunch we decided to fill with water and find a mooring. Not far, just edging our way along. Slowing to get a photo of our first glimpse of the Pontcysyllte Aqueduct we seemed to pick up something around the prop. Mick tried his best to encourage it to drop off by going into reverse, but this didn’t work. As we slowed for the lift bridge whatever it was could be heard catching as the prop rotated, this was going to involve getting a very cold arm. Once we’d spotted the water point and started to fill the tank Mick got the prop mate and long gloves out. A length of black rope came out of the water first, but would come no more, leaning down to try to extricate the obstruction it decided to drop off the prop. It most probably was a rubber fender, sorry if someone picks it up again at the water point. 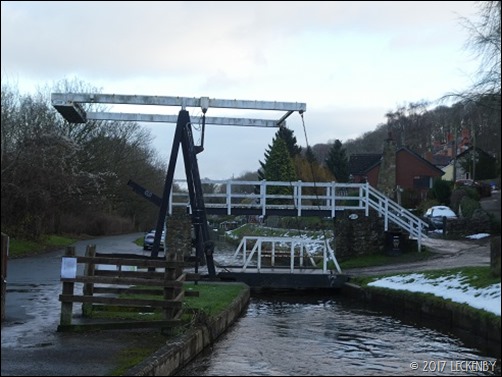 We could have moored on spikes here, but another two boats were here and there wasn’t much space, so only one thing for it, time to cross the OTHER aqueduct. 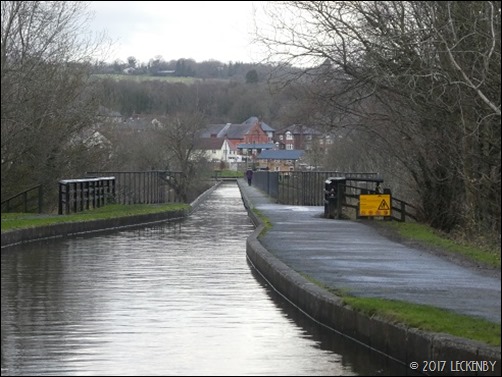 Unfortunately the sun wasn’t out for our crossing, but it wasn’t windy. I did my best to distract myself by taking as many photos as possible, the ones I really wanted impossible for this photographer to take, but I got a few. 126ft high the Pontywhatsit Aqueduct crosses above the River Dee and it’s valley. Towpath to one side (no mesh on these) and four inches of the side of the trough to the other. 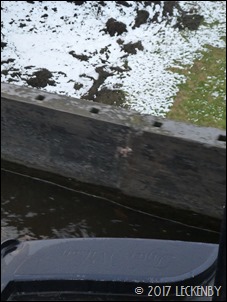 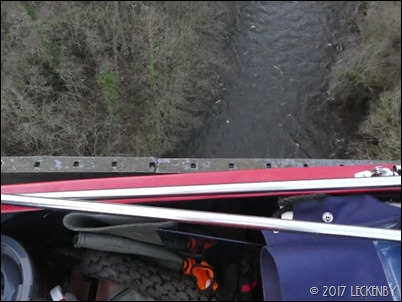 Some people say it is like flying, I have other words for it which I won’t share with you. Mick absolutely loved our crossing and the flow of the water wasn’t as bad as when we crossed on NB Winding Down.

Strangely enough I refrained from standing like Julia Bradbury did on the gunnel right over the 126ft drop. I opted for right in the centre of the semi trad deck. 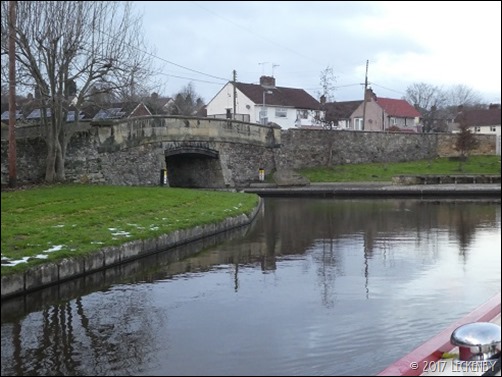 Arriving at Trevor access to the basin was only a boats width as all the hire boats were tucked up for winter, so we turned left and carried on towards Llangollen hoping we’d be able to find a mooring before long as the sunlight was fading fast. Through the narrow 200m we managed to remind ourselves of the Lancaster canal, still a long way out from the side we managed to get grounded. A bit further on and an opportunity to moor showed itself, but Oleanna just wouldn’t come into the side. A chap passing said we should try a short distance further on by a bench where the views were even better. But sadly here we were on a list, so we pressed on. Tunnel light on and torch in hand looking for rings as we went. Most of this stretch of the canal clings onto the side of the valley, the sides are concrete so very few chances to bang a spike in. 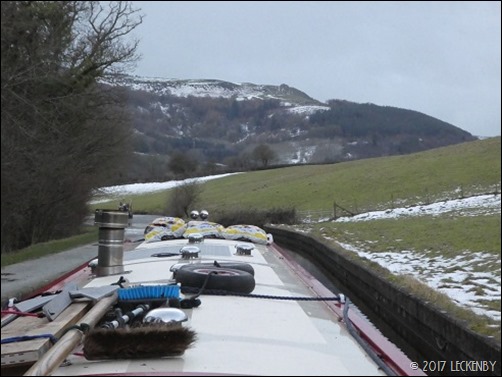 As we approached bridge 41W we could see another boat moored, so we pulled up and tied on the rings despite the close proximity of a road on the off side. Both frozen we retired inside to warm up and enjoy a very good Steak and Kidney pie that we’d got in Chirk. A worthy reward for a chilly high flying day. 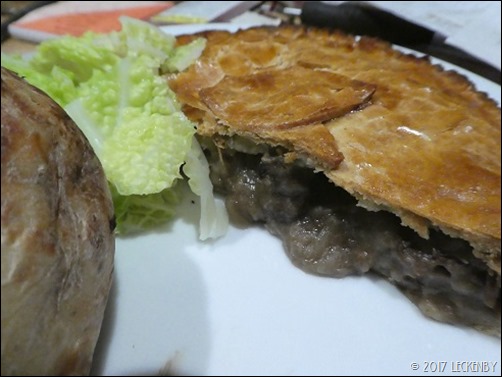