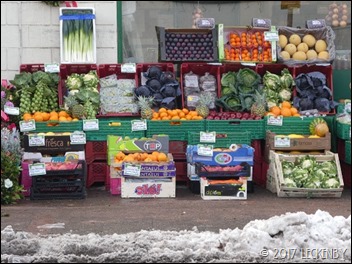 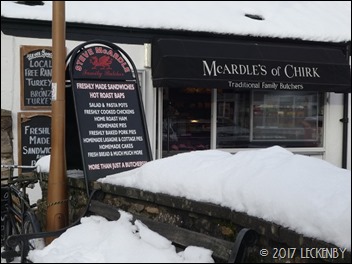 First I needed to post a couple of parcels. Mick needed to pick one up, which off course hadn’t arrived when he traipsed all the way across Chirk to the pick up point, of course it arrived a couple of hours later. Being in town gave us the excuse to sample the local pork pie and mince pies. They were good, but still nothing comes close to the Shropshire blue topped pie from Ellesmere. 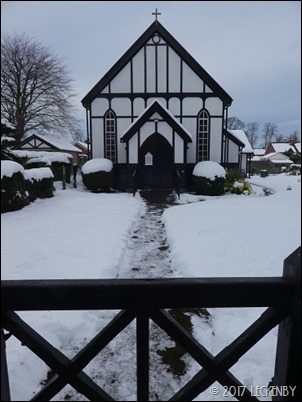 Next major job was to select which photo we would use for our Christmas card this year. In past years I’ve spent hours short listing images from the thousands I take. This year the job was very much easier. Main criteria were Oleanna and snow, so I only had to sift my way through the last few days for the short list. We then very quickly agreed on which photo it was to be. I then spent much of the rest of yesterday printing out the ones that get posted and designing the email version. This never is as easy as it should be, something always goes wrong and this time was no exception. 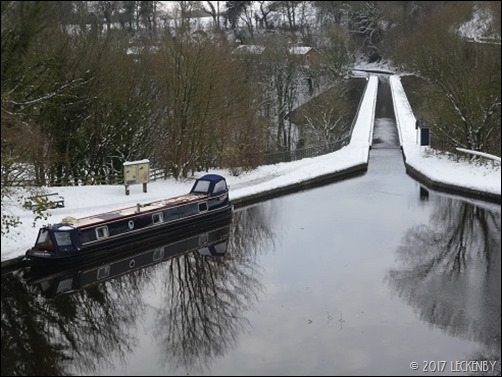 The chap behind us moved off in the morning so we pulled back into his space. Mick went to check the snow and railings on the aqueduct for CHASC, sadly for Tilly our mooring has been classed as not suitable for cats. She wouldn’t be able to fall between the gaps in the railings due to mesh, but should she try to jump up onto the handrail she is likely to continue the journey I started when 16! So whilst we are here her shore leave has been cancelled, she wouldn’t like it anyway as we still have plenty of snow. Just wish the Robin would stop taunting her though. The logs have been stowed, roof cleared of all remaining snow and we seem to have lost our list to port. We think it must have been a combination of things including snow drifting up the side of the boat pushing us away from the towpath. The yellow water tank was emptied into our 23 litre container. This of course would make an awful lot of yellow snow under the hedges! Mick was going to dispose of it after dark, hopefully not off the centre of the aqueduct!

Today we’ve had a shopping trip into Chester. Chirk station is unmanned and was really rather treacherous this morning. Compacted snow still lay on the bridge and steps to the platforms and the rain was making everything even slippier. People were clinging on for dear life to anything that came to hand. Our journey took us across to Wrexham where the snow seemed to disappear and by the time we reached Chester it made us wonder whether they’d had any at all. 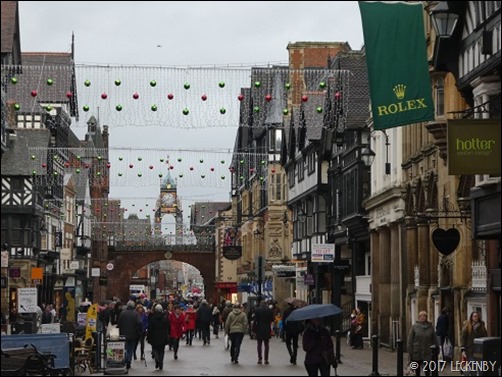 Here we went our separate ways to do secret shopping. Not knowing Chester that well it was a case of wandering around to see what was on offer. I found several interesting shops I’d not come across before and returned to the station with only one present absent. Not sure Mick was quite so successful, his bags didn’t look full enough to me!

Our decorations can wait for another day when we can be around to protect them from Tilly. 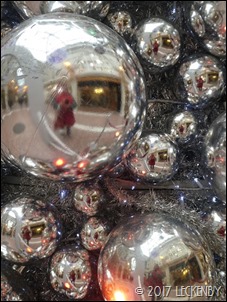