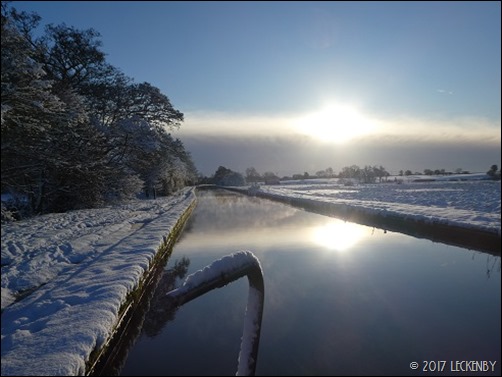 Today we woke to canal fret. A mist rolled along the canal as the heat of the sun caught the surface of the water. Today was going to be a stunning day. 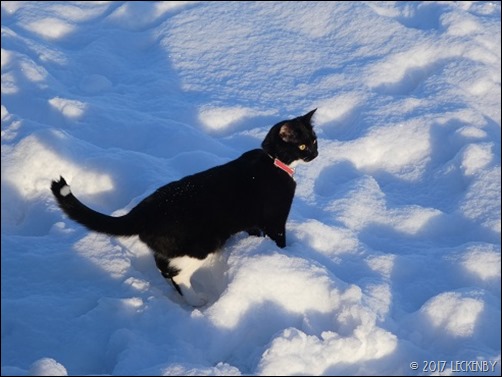 Tilly was given ten minutes of shore leave, of which she used about four before deciding that the sofa in front of the stove was far more appealing than being outside. 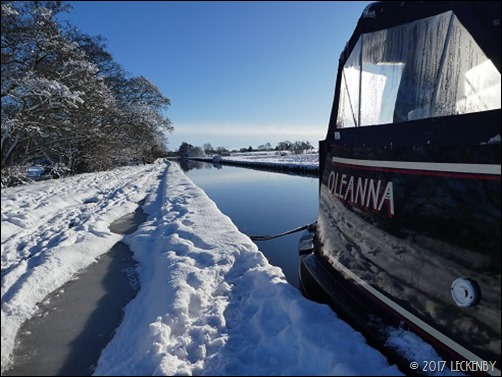 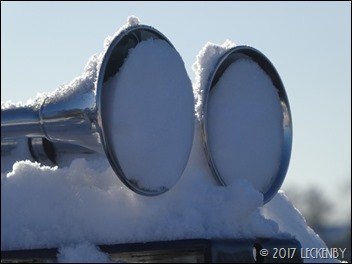 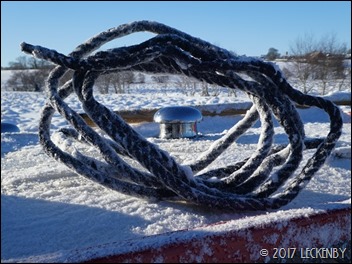 We swept the roof down and tried to clear the small icicles from the pram and cratch covers so as to be able to roll them up where needed. All the ropes were frozen and once dug out I performed the Shropshire Rope Trick with a centre line. Our rope fenders were also solid. NB Petula came past and was to be the only other boat moving today, at least he’d be in front of us if there was any ice breaking to do. So far we’ve not encountered any ice, due to the flow on the Llangollen, many other canals across the network have turned solid in the last few days, even the arm at Ellesmere was having a go last night. 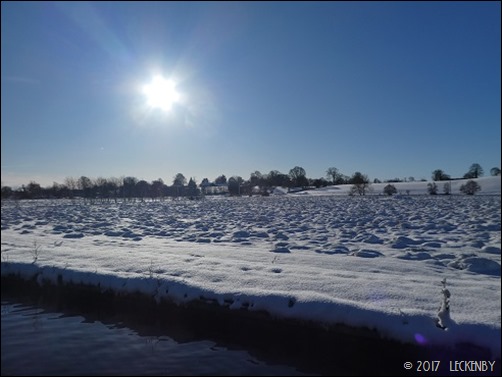 The world today was just stunning, my perfect kind of day. Snow on the ground, the sun out and bright crisp blue skies, just gorgeous. The world so many shades of blue. My camera worked overtime stopping just short of 300 photos. 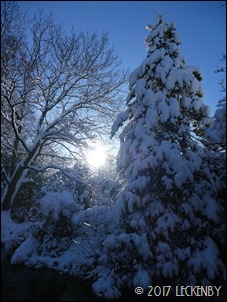 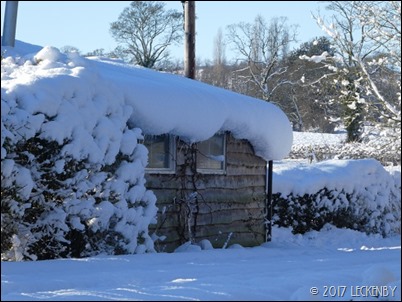 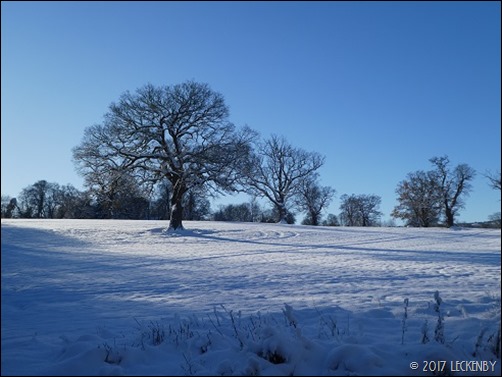 Every twist and turn gave us more stunning views, trees leaden down with tonnes of snow. Twinkling dust as we passed through avenues of trees. Fields stretching out covered with a layer of white icing the long shadows stretching right across them. 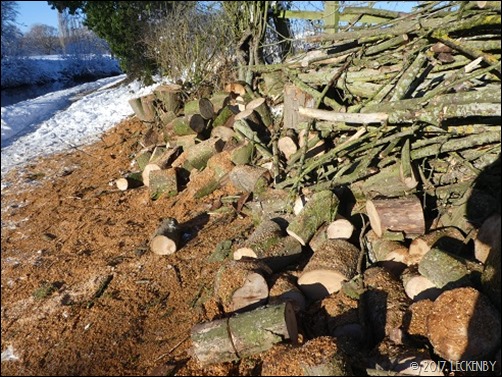 Just before Bridge 17W more trees were being trimmed and the chaps said that they’d just felled a dead Elm tree around the next corner. The chap from NB Petula was filling bags and loading them onto his bike, but there was still plenty there for the taking including smaller logs. A short distance on we pulled in at a visitor mooring, took our time to tie up and found ourselves several bags to fill with logs. Maybe Mick will have to have a Christmas present early. 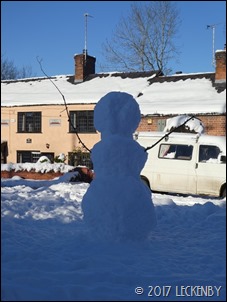 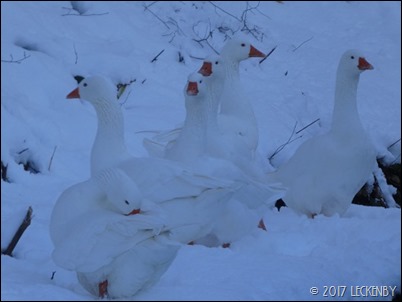 Our aim today was to reach Chirk Bank where we’d be able to cross the valley into Chirk to collect some Christmas shopping. But the moorings here were dark under trees, the last place we wanted to be with the sun out. One thing for it, we’d cross the English Welsh Border today in the sun and see if we could moor up before the tunnel. 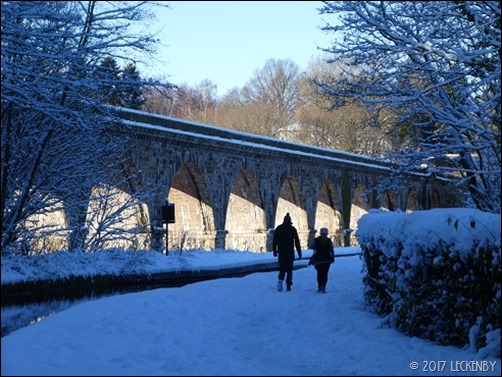 You approach Chirk aqueduct from the side and turn to cross it. The sun was low in the sky behind the viaduct which cast a  big shadow right across the trough. Plenty of people were walking across the 70ft high structure, a thing you will never get me to do. If we’d moored at Chirk Bank the most direct route to the shops would be across the aqueduct, but I would rather go by road down into the valley and then up again. Why miss out on such a wonderful walk? I have a fear of heights that stems from my first ever canal holiday when I was 16 on the Llangollen Canal. 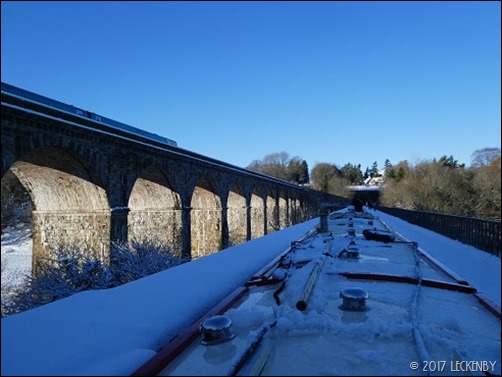 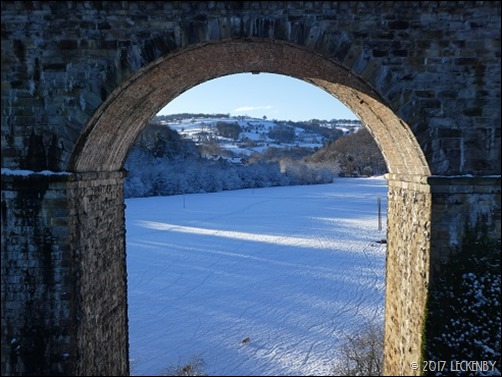 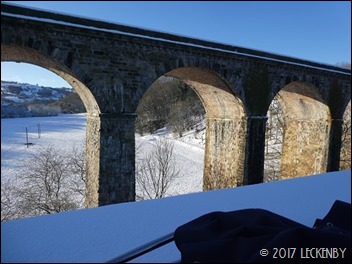 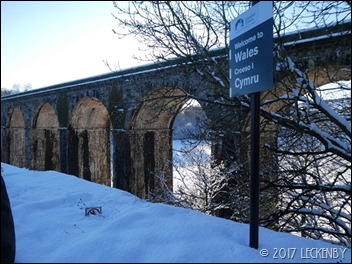 My boyfriend had fallen into the canal between Llangollen and Trevor on our return journey. I had washed out his fleece and wanted to put it on the roof to dry at the front of the boat. For reasons I cannot remember I couldn’t pass through the boat to the bow so decided to step off and walk along the towpath. This coincided with our crossing of Chirk Aqueduct. I didn’t want to risk trapping my foot against the trough walking along the gunnel so decided to step off onto the towpath. Half a risk assessment done, shame I didn’t do the other half! 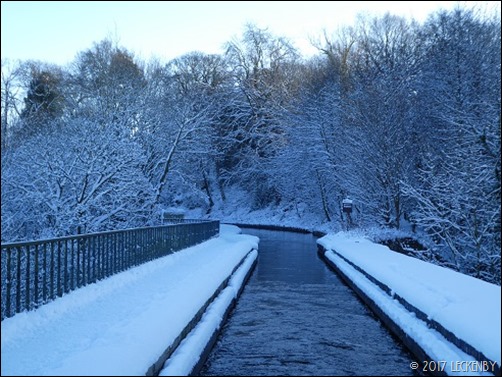 Chirk aqueduct has a towpath with a railing to one side and quite a wide edging without railings on the other (about 2ft 6). My memory is such that other people were on the none railing side (but this is most likely to have not been the case). So I stepped off the stern to trot up to the bow to get back on again. However I caught a foot on the edge of the trough and fell. Not flat on my face as there was nothing for my face to hit! From about waist upwards my body was hanging over the side of the aqueduct, above the trees below. I managed to stand back up ran to the bow laid out James’ fleece and went inside where Margaret rightly shouted at me.

So aqueducts are not my favourite things. Mick loves them.

But being official photographer I stayed put in the centre of Oleanna’s semi trad taking photos and feeling slightly queasy. 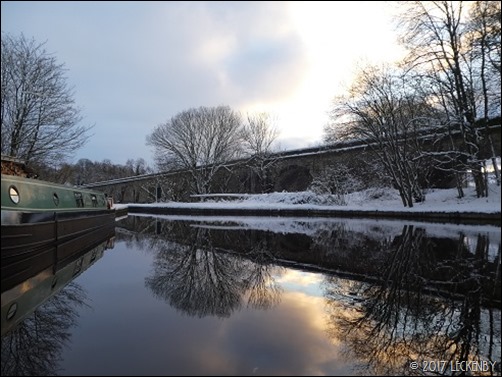