Have we been abducted? Taken to a white planet far from our canal world. Where ever this outside is, it’s bloomin cold! 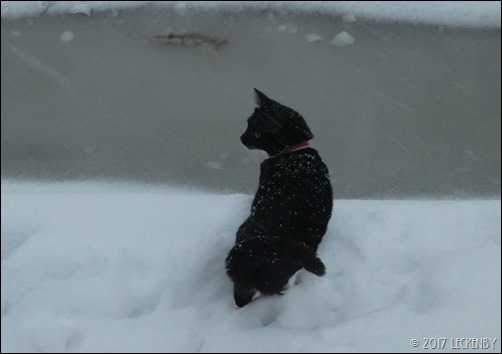 Tilly is not happy. We have found the one weather she really doesn’t like. 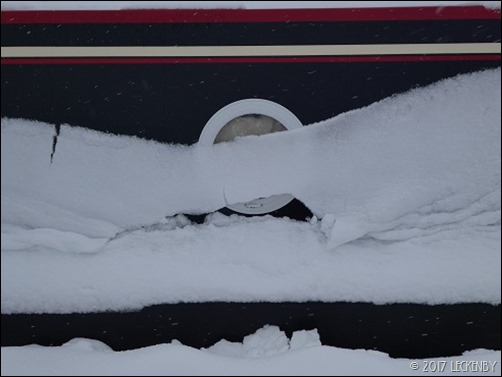 Overnight Oleanna had been covered on the starboard side with a layer of snow. The roof wasn’t as deep as on Friday, the snow was of a finer grade, far less fluffy. Yet for much of today it kept coming. 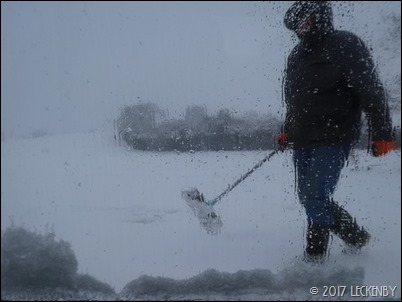 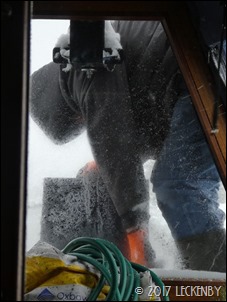 What was the one thing we both thought about yesterday, but didn’t mention, but should have? Yesterday, when the bow was clear we should have changed over to a new bottle of gas, this doesn’t take much to do, but does involve standing on the bow, which was now covered again in snow. The bottle lasted long enough to boil the kettle for a cuppa in bed and luckily ran out when we were up and dressed. Valiantly Mick put layers on, swept the bow and carefully balanced to change from one bottle to another. Glad we’ve got a third bottle in there, but that will take a bit more effort to connect. Anti slip on the bow and locker lids will be a priority when the weather gets warmer. 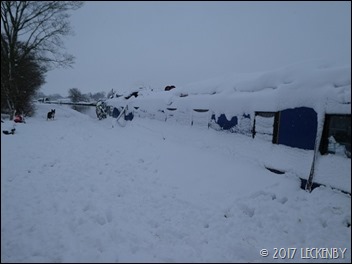 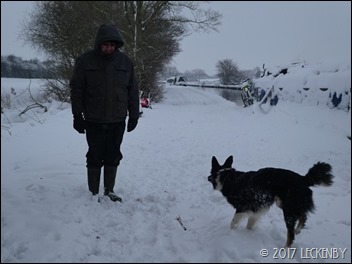 We had a short trudge up the towpath through what might be eight to ten inches of snow. The two boats ahead of us are obviously settled here. One sees the extra layer of snow very much as extra insulation, it is so covered it is hard to see. Wood was being chopped for fires and a dog was having a great time in the snow. It so wanted sticks throwing for it that it tried to bring us full blown branches at first until it found a suitable stick. This was a game that could have gone on forever as the stick was always returned close enough to pick up. But when we said we’d had enough the dogs ears dropped and it turned away to walk back to it’s boat. 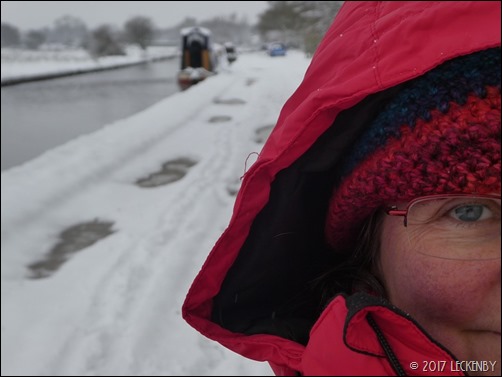 In the last few days we seem to have developed a list to port. This is puzzling us and as we move around all the galley drawers open, which is very annoying. We’ve been through just about everything it could be. Too much coal on that side, the compost bucket being quite full, fridge being full, snow on the roof, are we sat on the bottom? Mick even pulled the fridge out to see if we had water in the bilges, but all down there was dry. We don’t understand it. 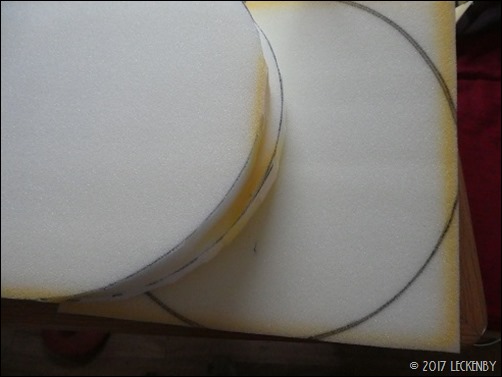 Much of the day we’ve stayed indoors. I started on the cushion tops for our stools. When in Hanley I bought squares of one inch foam which today I have finally cut into circles for the tops. The duvet covers I’d bought months ago have been ripped into lengths and I’ve started to crochet a top. My hope is that the top will hold the foam in place. I nearly got one large enough to cover the foam. Tomorrow I’ll try fitting it on the stool and work a draw string into it with the hope that this will hold everything in place, but be removable for washing.

The forecast for the next few days is very cold. –12C or even –15C at night. We are hoping that the flow on the canal will mean that it won’t freeze. Back in 2010 it froze at Trevor. If we can move safely tomorrow we’ll move up to Chirk so as not to be in the middle of nowhere.