The winds got quite strong last night, but we’ve known worse. The rain that was forecast for most of the early morning seemed to happen in about fifteen minutes, then someone turned the tap off. 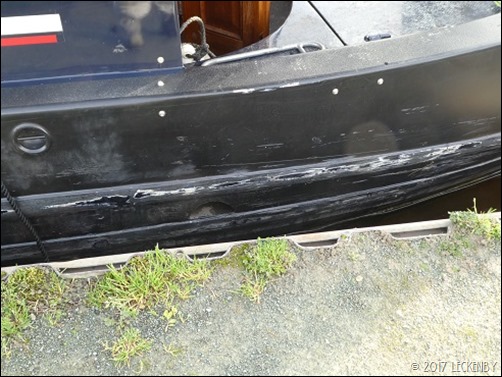 I wasn’t in quite such a rush to get the gunnel washed down today, but it was still done before we had breakfast. After which we decided to push over to the services to top up the water tank.

This of course was when the wind decided to be at it’s strongest! Mick reversed Oleanna up and the wind which had been pushing the bow out decided to change it’s mind and we ended up diagonally across the cut. Mick managed to step off the stern and pulled with all his might to get Oleanna into the side. Sadly the armco isn’t nice and smooth at this end of the services and whilst fighting the wind there wasn’t time to position a fender in exactly the right place to protect the freshly touched up gunnel from the large sticky outy bit! A three inch gash right down to the metal. At least I could give it a coat of something before we pushed back over. 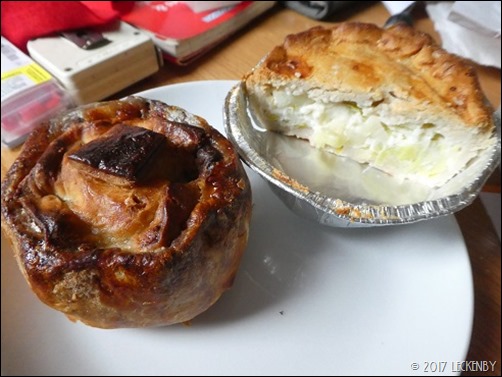 With the gunnel now dry I worked my way along with the black, freshening it up, avoiding the puddles on the towpath as I went. Mick headed in to the Post Office to check on Post Restante and then a slight detour via Vermeulens. He returned with a pork cheddar and mustard pie for himself (which got the thumbs up) and a leek and potato pie for me (which was crammed full with a tasty sauce). If the weather stays bad will we be able to sample all their pies! 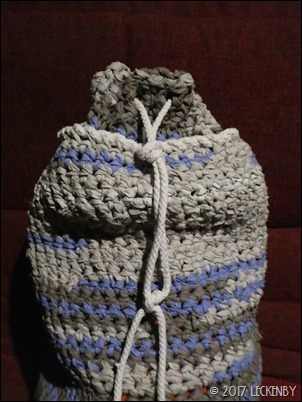 The rest of the day the weather was disappointing, we stayed inside. I baked a loaf of bread for myself and pulled out a few inches of my latest creation (a sort of duffle bag) to make it that bit shorter. Weighing it on our kitchen scales I managed to finish it at just under a kilo, but I suspect it will just tip over into the next weight for parcels once wrapped. 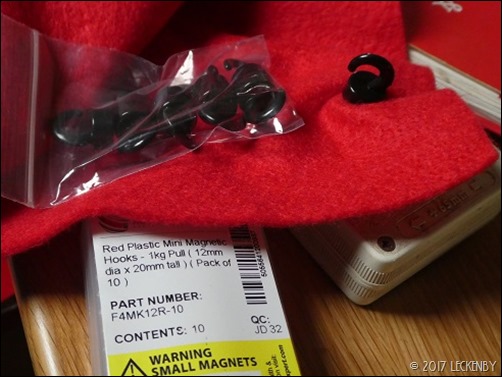 Mick had been successful at the Post Office. We now have means of attaching our Christmas lights to Oleanna. Lillian’s grab rail had three quite handy little bars  which went across the drains from the roof. Here we could tie fenders and cable tie our lights. A Tyler Wilson shell has nothing of the sort, in fact there are very few places to attach anything to other than the centre line. So a couple of days ago Mick hunted round for some magnetic hooks. We now have red and black hooks that should keep our lights in place.

Sadly our new mooring, only about 60ft further back has resulted in not being able to get as many channels on the TV, so no Tim and Pru for us this evening, we’ll have to catch up with them on line.