A chilly and windy start to the day, so with padded trousers and extra layers we pootled along. Hoping for a couple of phone calls I kept my phone out the back with us on charge to the socket on our Nicholsons shelf. The signal was very intermittent but I still had chance to make arrangements with my friend Jaye from Scarborough. The other calls we hoped for didn’t come. 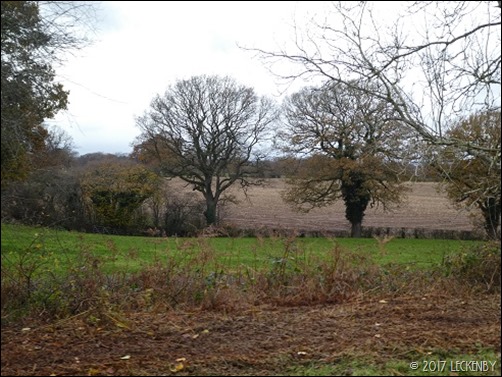 Where we had moored last night was only 500m from the Welsh border, today we were to get as close as we could without crossing it. A line of trees showing where a stream runs is the border for a while. It swings around getting closer, 60m, and then drifts away again. At Tilstock Park Lift Bridge 42 the border joins the towpath. I’m fairly sure that as I walked up to the bridge I managed to stay in England, but any further on and I’d have crossed the border. 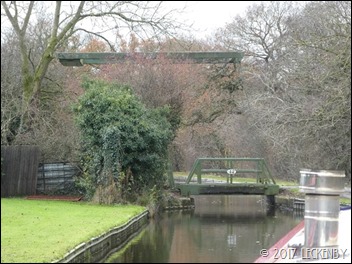 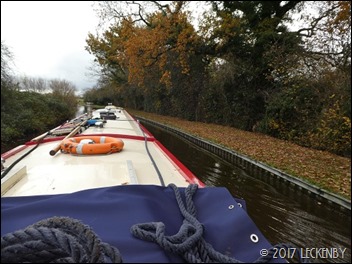 For the next kilometre we ran right along the border, the towpath now Wales but the water in the canal still English. 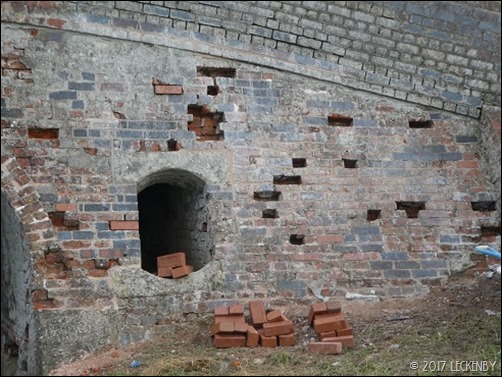 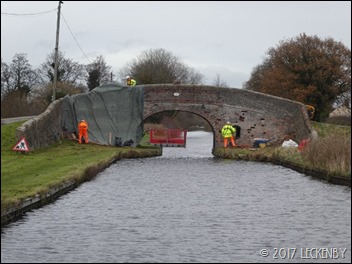 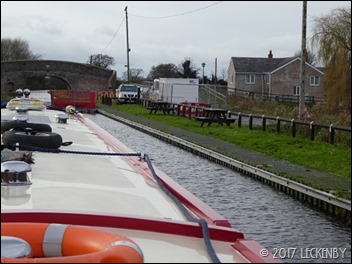 We are starting to make mental notes of road access at bridges, Finesse will be making us a visit at some point so parking and ease of reaching a mooring will be important. Platt Bridge was a possible, but just a short distance further on at Roundthorn Bridge 44 there was a perfect place. Here there are 48 hour moorings and even a layby right next to it. The road not too busy for us to let Tilly out whilst the chaps are with us. The only downside is that the bridge looks like a large slice of Emmental cheese at the moment. C&RT are carrying out repair works to it and have taken over quite a large part of the layby for their works, but there is still room for a van.

By now the wind was quite strong and biting, after an hour and a half we needed a warm up, so we pulled in to have some lunch. Once defrosted we pushed on some more, our hope being to reach the Prees Branch today. We were now surrounded by low flat land Whixall Moss which is part of Britains third largest lowlands raised bog. The 948 hectares are visible from space. There is plenty of wildlife here, but today was not the day to go off to see any as it was so bitter. 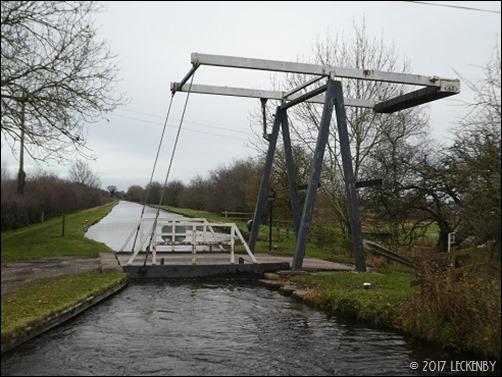 The long straight of the canal has one bridge that crosses it, Morris Lift Bridge. Is this a low bridge? Is it a bridge? It has no air only water under it. The roadway actually sits into the water and by eck it takes a lot of winding!

With the wind now quite strong and straight ahead any deviation from straight meant the bow being pushed off line, Mick had difficulty in straightening Oleanna up to come through the bridge. We were soon to arrive at the junction with the Prees Branch, as soon as we turned we would be pushed into the bank so progress wouldn’t be so easy especially with there being more lift bridges. So we decided to call it a day and pulled in at some moorings just short of the junction. 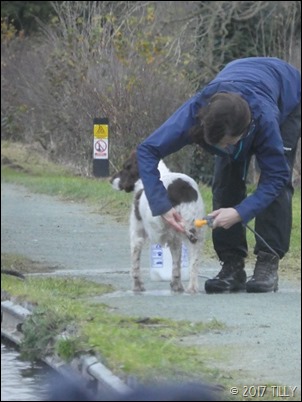 This outside had plenty of sheeps. They all kept running up to one end of the field and disturbing my friend hunting, then they would go back again! One of them had what looked like my harness on, but no-one was holding onto a lead. A while after we arrived so did another boat, this had a woofer with it. Once they’d tied it to the outside the lady gave the woofer a wash with a spray. This is just another thing that proves cats are far superior, woofers can’t wash themselves! Stupid!!

I would just like to say that Tilly’s views are her own and do not necessarily constitute the views of this blog writer. I apologise to any woofer dog owners for any offence caused.