With the weather set to get wet this afternoon we moved off quite early after emptying the yellow water tank. Not far ahead was Marbury Lock which was sat empty waiting for us. Just as I pushed the gates open a boat appeared up ahead meaning we could swap over once we’d ascended. 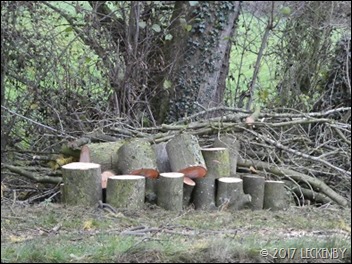 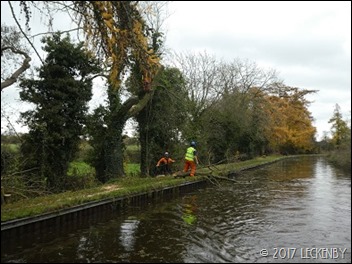 Just before bridge 24 there were a couple of chaps trying to haul a large branch out from the cut. A chop with a chain saw meant they could haul the section of branch out of our way. It looks like several trees are being felled along this stretch and piles of Boaters Gold are sat waiting to be picked up. 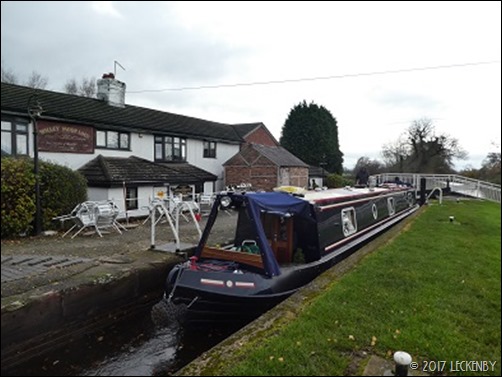 For the last week or so I’ve had an image in my head of a pub right by a lock with a car park on the off side, I couldn’t for the life of me think where it was. Well today we passed through it, Willeymoor Lock and Willeymoor Lock Tavern. Maybe we’ll pass by when it’s open on our way back next year and stop to sample their wares. 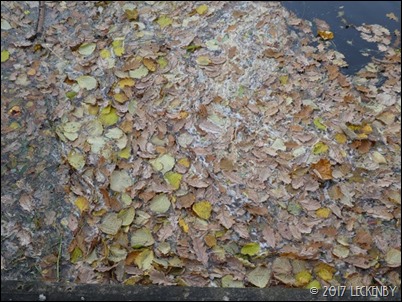 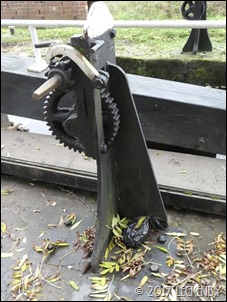 We must have been the first through the locks today as below each one was a mass of leaves, then above them there were more, leaf porridge. As I opened up paddles the leaves were sucked through and the whole of the lock became a mass of whirling leaves. Once the top gate was opened Mick fought his way out of the lock. No matter how much power he used Oleanna only just managed to glide out. Even blasts of reverse weren’t enough to clear the prop as there were so many leaves. I reckon we’d have been quicker bow hauling her out!

As the Grindley Railway Bridge came into sight we pulled over onto the end of the visitor moorings, the only boat on them again. 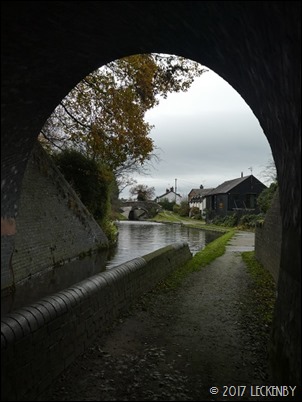 A walk up to the locks to have a look. We have a supermarket delivery booked for tomorrow and wanted to check where we were hoping to have it delivered to. The A41 passes through Grindley Brook and between the first two locks there is a petrol station with a gate that leads to the towpath. Our delivery details were for here, we would work our way up the first lock and wait, helping any boat that came through. But as we walked around a better place to wait was just below the first lock where a van can get to the side of the canal by a bridge. 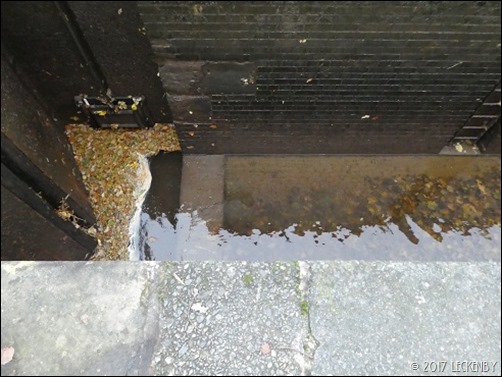 Here there is a staircase of three chambers. Between April and October they are manned by a Lock Keeper and volunteers, but now they are unmanned. The bottom chamber was half full and the top two were empty. When I say empty I mean that we could actually see the bottom of them. Ideal for checking a bow thruster tube! We won’t be emptying them that much as we go up.

Outside a house by the bottom lock were two large boxes of wind fall cooking apples with a large note attached saying they were up for grabs. Not being greedy I picked up three hoping we had enough eggs to make a cake. The heavens then opened so we retired to the boat to let Tilly out and to bake. I decided to use gluten free flour which has worked out well, however the top of the cake caught just a little bit in the top oven. I don’t know if this was to do with the flour or our oven was just a touch too hot. 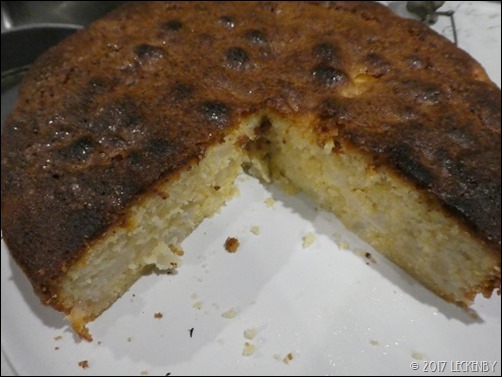 Staying indoors whilst Tilly got very wet we deserved a slice of still warm Dorset Apple Cake with a cuppa. Very nice it was too.