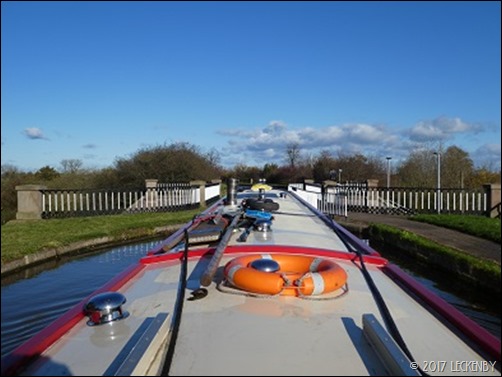 My it was chilly even in the sun today. Padded trousers and extra layers  were put on before pushing off this morning. Our water tank was showing a quarter full so we needed a top up, a load of washing was popped on too just to make the most of being at a water point. Despite the tap only being a few hundred yards behind us we crossed over the aqueduct and pootled to the first winding hole where we turned and returned to the service block. Further south on the Shropie there are already stoppages, so I doubt anyone is going any further for a while. The number or lack of boats surprised us along the embankment, plenty of room. 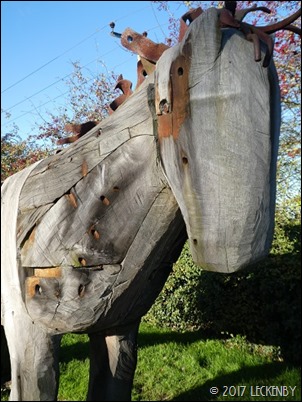 As one tank filled another was emptied and passersby stopped for a chat, mostly concerning the lack of facilities  in the area and what was going to be happening with the bottom lock at Hurleston in a weeks time. One chap was certain that they were going to rebuild it, but our stoppages list says that they are going to do a full survey of the narrowing lock chamber so that they can come up with a solution with the works being carried out next winter. Other works are going to be carried out on the flight through to mid December.

Once we were done we carried on through the next bridge and pulled up on a shadier visitor mooring. From here we walked back into town to go exploring some more.

A few days ago I’d noticed a metal plaque in the paving outside the Almshouses, this had a clock face. On hunting round the internet I could only find one reference to the Nantwich Hidden Treasures trail and this wasn’t much help. So yesterday we popped into the museum to see if they could shed any light on the plaque. They rummaged around behind the counter until they produced a leaflet. Fifteen places of interest around Nantwich each having a clock face with a different time somewhere nearby. We’d already visited quite a few places on the map, but there were others a little bit further out that might warrant a visit. 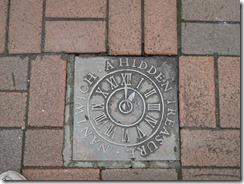 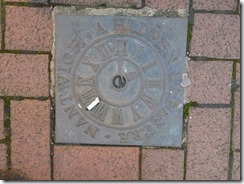 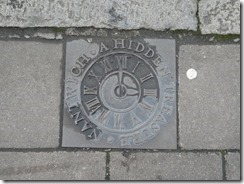 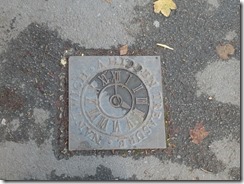 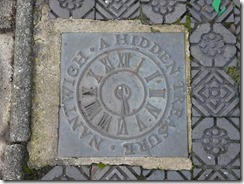 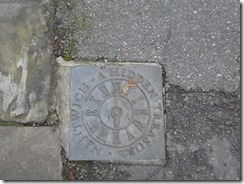 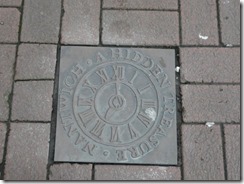 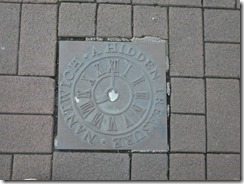 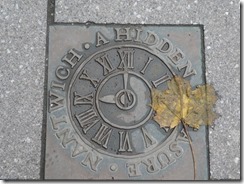 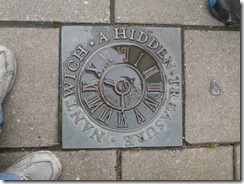 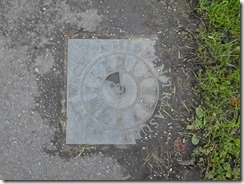 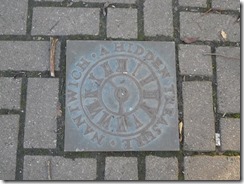 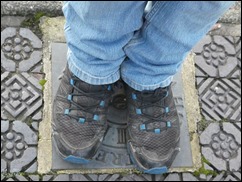 So with a different route planned, edited by me, we walked back into town to see if we could collect the clock faces and see interesting things. 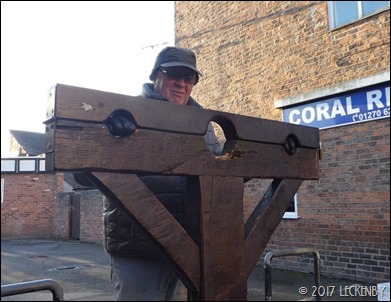 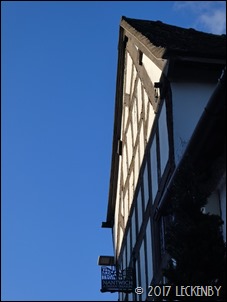 Our walk took us to an island on the River Weaver where two mills used to be, numerous houses, churches, stocks, more almshouses (one that was moved brick by brick in the 70’s), the Civic Hall. 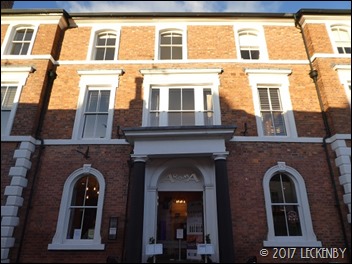 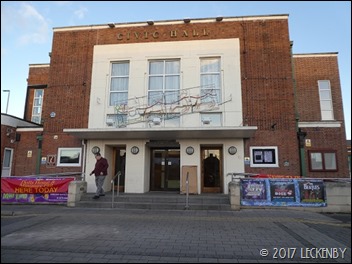 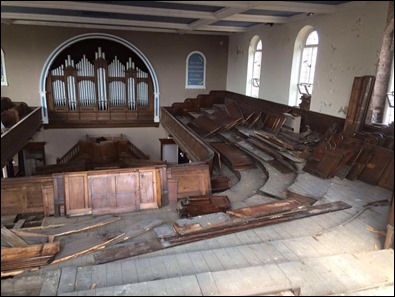 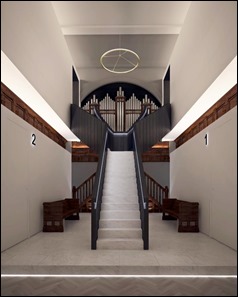 Plenty to see and learn about. One old chapel is being renovated and turned into 8 luxury apartments, sadly the building was covered in scaffolding, so not much of it could be seen. However looking on the company’s facebook page it looks like an interesting project. Who wouldn’t want an organ at the top of their stairs. 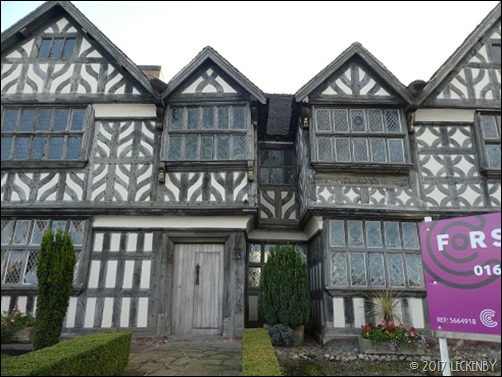 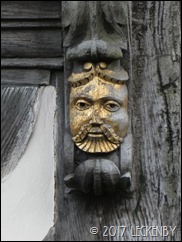 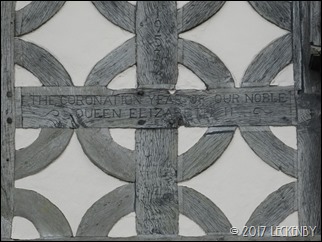 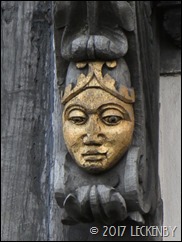 Overlooking one roundabout a large half timbered building stood surveying all around it. From across the way it looked sad and unloved, maybe all the black and white painted buildings elsewhere in town had clouded our minds to a greying building and the For Sale sign outside didn’t help. As we crossed over to look more closely at it our minds changed completely. The patches of lawn outside were neatly manicured, not a weed anywhere to be seen. Churche’s Mansion was built in 1577 for Richard Churche a local merchant. This Elizabethan Mansion is Grade 1 and will set you back £1,050,000, vacant possession, so you could move in straight away! It has recently been a restaurant and part of an antiques salesroom. Here’s a link to what it looked like about a year ago inside, a rare surviving merchants house, maybe something to do with the Salamander on the front of the house (indestructible by fire). 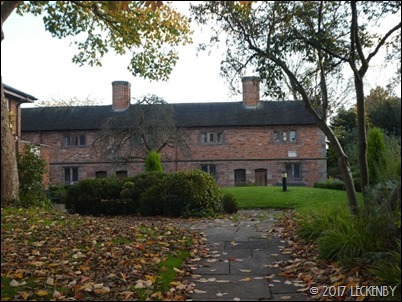 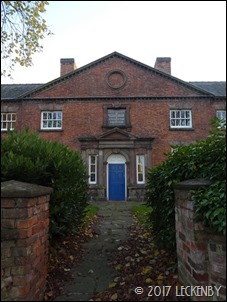 Plenty to see on our walk, but we were glad it was edited as we were now really rather chilly. We only missed two clocks. 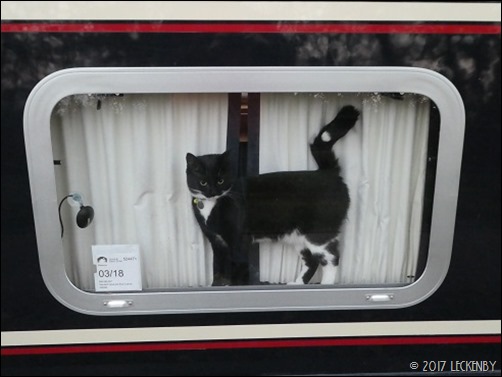 Tilly was sat waiting for us to return in a window. I was actually watching the masses of stupid woofers running up and down. None of them doing anything useful, just sniffing each others bottoms and chasing each others tales as people shouted names at them. Then they came home, I don’t know why they bothered, I knew it was far too late for them to let me out! Selfish!!