Once the car was returned and we’d both had breakfast it was time to get a move on. We’d like to try and be moored on the Middlewich Branch for bonfire night as we did last year. With the weather report not so good for tomorrow we wanted to get as many of the Cheshire Locks done today. By the time we were ready to push off it was 11am. 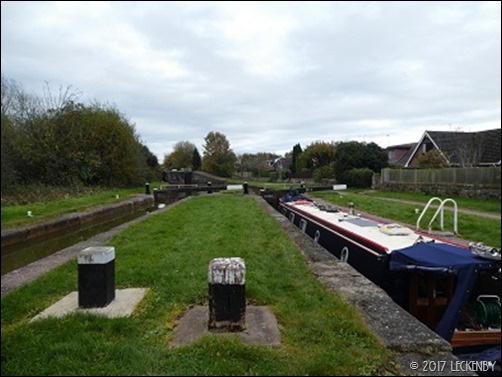 The day started well with locks already set in our favour and we very quickly fell into our downhill routine. As I walked up to the first of the Lawton Treble locks I could see a chap lifting a paddle to empty one of the paired chambers, someone coming up. The other chamber had a paddle lifted on it too, but in our favour, so I just had to push it open before returning to let Mick out of Halls Lock. Knowing there was a boat on it’s way up I could leave the gates open for them, which they were very grateful for. They hadn’t seen us coming so hadn’t left the gate behind open for us, but if that was the case who had lifted the paddle for us?

I walked down and had to lift a paddle as the lock had started to leak and the level had dropped. Back up to let Mick out and then leapfrogging him to the chamber below. I thought of mentioning about the paddle still being up, but he always notices. When I returned to lift the second paddle Oleanna had only dropped half way and wasn’t getting any lower. Oops! He hadn’t seen the paddle and was wondering why he was being dragged backwards in an emptying lock. Luckily for those following us the short pound above had only dropped a bit and the by wash was doing it’s best to refill it, so it would recover quickly. 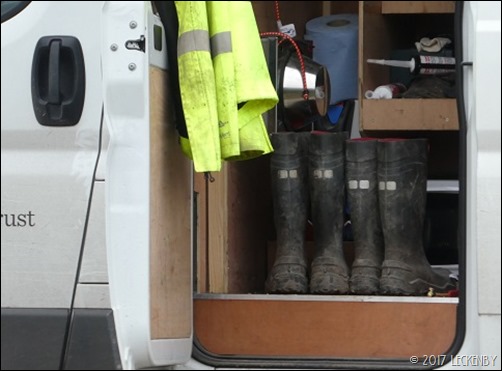 As we approached Thurlwood Lock there were people there so I hopped off to lend a hand bringing their boat up. This is the lock with a gate paddle and a lady whipped this up a bit quickly, I hoped their boat was a long way back. But as I got closer all became apparent there was no boat. They had just started to empty the chamber when they saw us coming so had started to refill it as their boat hadn’t as yet got to the lock from the previous one. We stood and chatted as the lock filled, except it was taking a rather long time. That would be because they hadn’t dropped the bottom paddles fully when they decided to refill it. Mistake spotted and rectified. What was it with today, this was our seventh lock and the third one with a paddle left up. Another member of the crew came up and suggested that I could walk ahead where the next lock would be set for us. I however decided to loiter, just in case. 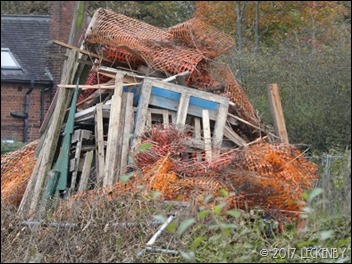 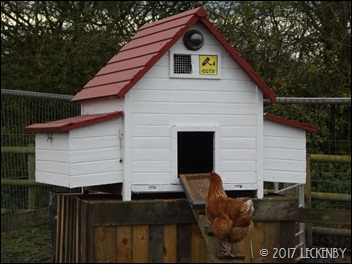 As we got to Pierpoint Locks there was yet another paddle lifted, not in our favour. I walked down to see what was happening and there was a crew at the lock below preparing to come up. So I swung the gates open ready for them and went down so that they knew they could leave the gates for us. Here there was a chatty lady and chap. She wound the offside paddle up said a few words then walked off to the next lock which was already for them. I stayed and wound the other paddle up, opened the gate. Their boat was put into tick over as he hopped off and wound the off side paddle down and then stepped back on as the boat passed by. We were thanked for our help and informed that the rest of the locks would now be set for us as we were the first boat they’d seen all day.

A bowl of warming soup above Lock 57 restored us for the remainder of the locks down to Wheelock. Sure enough the first lock was just about set for us and just needed topping up. I could see that at the next pair one chamber already had it’s top gate open. This sometimes happens when you close a lock, there’s too much water squeezed in there and when the boat moves off the gate opens up. Nice for us to be able to just go straight in. From here I walked on ahead, saving the time it takes to pick me up and drop me off at locks, with the hope that Tilly would get an hour or so shore leave before the light went. 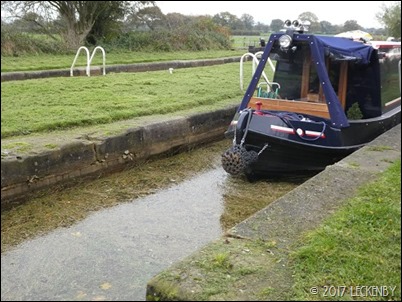 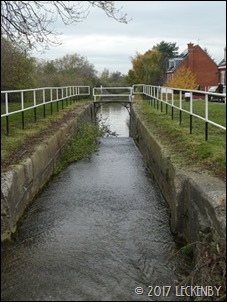 The next lock also had it’s gate open. Maybe the couple going up left the gate open. Then the next one. Maybe they would leave a gate open when the other paired lock was also full. Then the next one, this was a single lock. All very easy for us and it did speed up our journey down the hill, this was what he’d meant by them all being set for us, but bad practice. Having both sets of gates closed and all paddles closed is better for keeping pounds full. The couple on board should have known better as they were seasoned boaters, maybe they thought that their age gave them an excuse.

Then at the last three locks before Wheelock there were no gates open. They must have set off from around here. 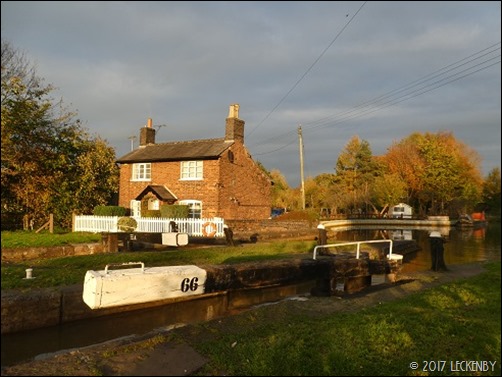 We pulled in at just gone 4pm. Tilly was allowed out for an hour. Except I had to share the towpath! There was this ginger cat who stepped off the boat ahead as I stepped off mine. Both of us looked each other up and down for a while. As neither of us had had chance to claim the towpath yet there was no need to have a stand off. So I went my way whilst he went the other. I did manage to claim quite a lot though as he walked quite a way!