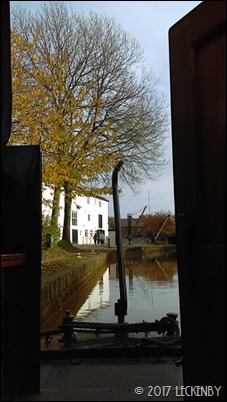 NB Halsall pulled away shortly before 7am to make it up the locks, stopping at NB Tilly Mint and friend on the way. Martin wanted to be at the tunnel for when it opened this morning, suspect he likes to be first through. We weren’t quite so keen to get out of bed.

The brackets that hold the glass in the door of our Bubble stove have moved slightly, so the glass and it’s seal were in danger of opening up a gap that fumes would come through. This all just needed realigning and tightening up, so the stove needed to go out and cool down, this took most of the day, glad it was warm. More loads of washing went through our washing machine and then all that could be was tumble dried. Everything is now clean again and the dirty linen drawer empty. 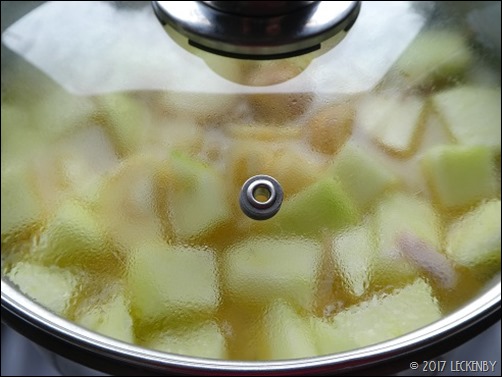 I had a walk up the towpath to Tescos to see if there was any veg in the sad gits section to make some soup. The carcass of the chicken had made some rather good stock so that needed to be used. So when I got back parsnips, a Bramley apple and some old potatoes went into a pan and we now have plenty of warming soup to keep us going for a couple more days.

Few boats went past today, only one going up the locks. Just as we’d sat down with bowls of creamy soup there was a tap on our roof. The boat had just come up the locks and they were having engine difficulties, no fuel getting to the engine. One thought they had was that if they had a pump out then the list that had developed would go and fuel might just reach the engine again. To do this they would need to bow haul their boat to the pump out machine, could we move out of the way for them? Of course we could. Once the soup was consumed we untied and pulled out leaving them room to pull their boat up. We then pulled back in leaving them space behind us should the pump out not work and them need a mooring. Looking at their stern the list wasn’t all that bad, so if it had been the cause of their problems they would need to be filling their diesel tank very soon.

A couple of hours later we heard them trying to start up, after quiet a few attempts she obliged. They then carried on up the locks leaving us on our own again.

Mick had a hair cut on the towpath and Tilly spent much of the day coming and going until she’d totally run out of any energy and just had to sleep. This made for a quiet evening in front of the TV, knitting, watching the final of the Great British Bake Off.