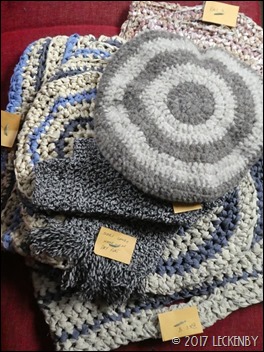 The next batch of bags and hats was ready to be sent off this morning, so once they were all labelled and parcelled up I walked the three quarters of a mile to Stockton Brook Post Office. 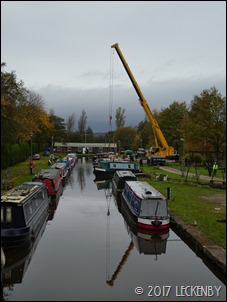 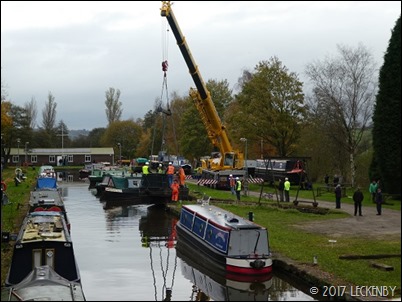 At Endon Basin the reason for the number of moored boats yesterday became apparent. They were all waiting to be lifted out. A team of chaps in high vis were busy craning boats into the water that had recently been blacked and then filling the spaces with the next batch. I did wonder about asking if Oleanna could be lifted so that we could look at the bowthruster, but I suspect we’d have been far too heavy for the crane as all the boats seemed to be quite short. 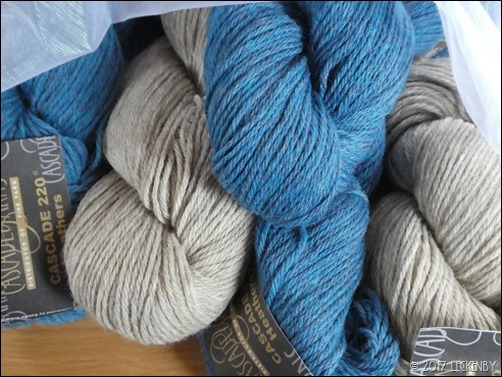 At the Post Office I handed over one parcel and received another that was waiting for me. Turquoise and buff wool for a Sontag shawl. When I got back to Oleanna pleased with my trip Mick reminded me that I was also meant to buy our Saturday Newspaper. Fail! I’d totally forgotten, didn’t even notice any newspapers in the Post Office.  So Mick walked to the Co-op which had the right paper, but no colour supplement. So he went to the Post Office where he found a paper with all the extras. Maybe I’ll be relieved of paper duties next week.

Two boats passed shortly before we pulled out, so we took our time before we pushed off as there would only be a queue at the locks. 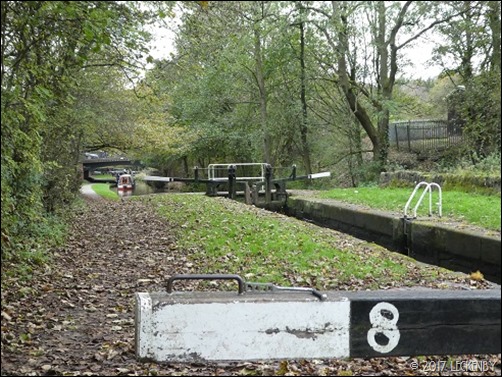 NB Bounty was just entering the top lock as we arrived. The lady explained that they’d been at the services with the boat ahead and he’d asked if he could pull out first as he was wanting to reach Great Haywood today. Blimey, that’s 18 miles and 18 locks for a single hander! We were all in the opinion that he’d not make it (16.5 hours according to canalplan) especially as he must have left the services at around 1pm. As he was in a rush he had left the bottom gates open and the paddles up, so NB Bounty would have to close everything. He apparently apologised a couple of locks down, but they said that he should carry on, maybe to get a bit more space between them. I had joked that they must be heading northwards to Red Bull, so as to loose the single hander. But I can’t have been heard correctly, they thought we were hoping to get to Red Bull today. Mr NB Bounty must have thought he was surrounded by speeding boaters each with an unrealistic aim for the day, Harecastle Tunnel would be long closed for the day by the time we got there! 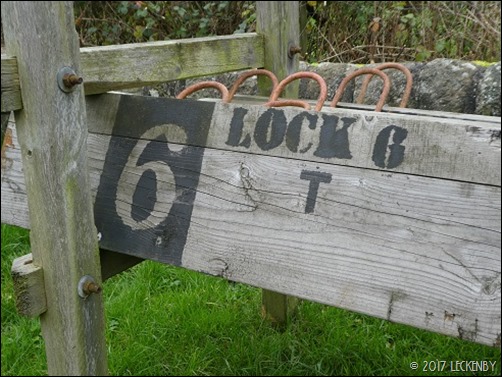 I corrected our destination for him, just below the bottom lock, only another 100 meters. We have an empty gas bottle so would like to stop at the Calor Gas place in Etruria and they won’t be open until Monday, so no rush for us. Red Bull by the end of Monday.

Once moored up, Tilly let out to explore the area we settled down for the evening in front of the stove. I worked up a tension square, which turned into two as I needed bigger needles. Sadly I don’t have the right size of circular needles so will be climbing the hill into Hanley again before we go through the tunnel. I really hope Abakhan stocks the size I need.