With rain and wind we weren’t planning on taking the boat anywhere today. Instead Mick climbed aboard the No16 bus which took him back to Hanley to see if a water pump had been delivered, whilst I climbed the hill leading up into the village. For once I was to be the paper girl, Mick normally beats me to the job, well that’s my excuse anyway! 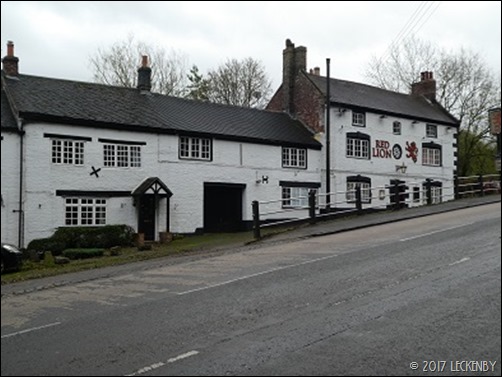 There are a few shops in Cheddleton, the village lying much further up the hill than I’d expected it to be, but it was good exercise. Bargain Booze only had the local paper so I carried on further to the One Stop shop which had a full selection. I’d also been hoping to find a Post Office which yesterday I’d found on Google maps, but today when checking for it’s location it now said that it was Permanently Closed. That was quick! So I won’t be getting my next order of wool delivered here. 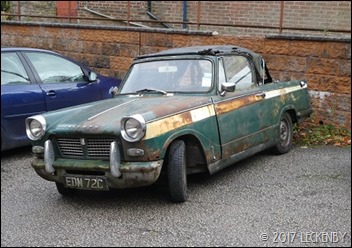 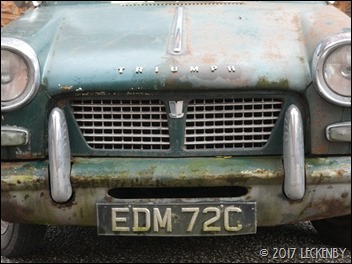 Signs enticing you up a side road to Cheddleton Old School Tea Rooms and the Black Lion nearly swayed me but I managed to resist. Next to a hair dressers sat a green MG, having seen better days but in far better nick than the convertible Triumph next to it. The roof was all rotted through and with large rusty patches it just seemed to be managing to hold itself together.

Tilly went out and spent much of the rest of the day wading through the boggy bits down the bank and getting really rather wet. She’d return every now and then to tell us all about it and to insist on receiving a few treats for coming home on her own accord. 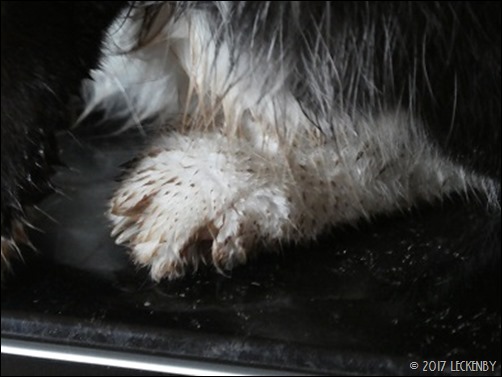 Mick returned from Hanley, not requiring any treats!  Originally when  I’d contacted Finesse about the broken pump I’d forgotten to mention that post being sent to a Post Restante address needed to be sent by Royal Mail or Parcel Force otherwise it might be returned by the receiving Post Office. Presumably the Post Office receives no financial incentive in receiving parcels form other delivery firms. I’d remembered this and emailed Chris/Kev as soon as I could, nothing worse than having a parcel returned. The order was already in Midland Chandlers system, so we’d see what happened. Luckily for us the receiving Post Office was run by kind soles. The parcel had caused a bit of a stir when it had arrived addressed to The Post Office. No mention of Mick’s name or Post Restante! With no bar code to scan they had opened up the box and seen on the advice note Mick’s name and the fact that it was a Post Restante delivery. So when Mick arrived asking for his parcel, he was asked what was inside, water pump, here you go. They don’t normally accept such things! 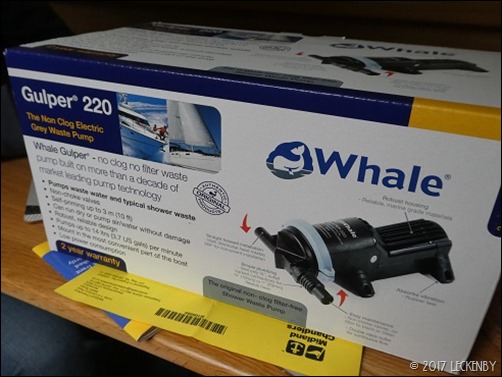 I wonder how many parcels Midland Chandlers sends out to boaters with no fixed home address. Surly they must send things to Post Restante addresses every now and then, you would think they would know about such things. But then again, it’s most probably just in a warehouse that the order gets printed off, picked, packed and the label just stuck on the box and put in the next pile for the courier. Next to no human interaction with what is on the label normally required.

But we had our new pump! The thought of looking at steam engines in the pouring rain didn’t seem all that attractive, so I got on with more bags and Mick got on with replacing the pump.

Once removed from it’s fixings you could see that the main body of the original pump had a large crack in it. We’d only removed the panel covering it once before and that was to see if insulation was needed around the central heating pipes. By the way the bit of foam mat we put between the yellow water tank and the pipes has been doing the trick, we’ve not had any aroma since. Once the new pump was plumbed in we gave it a trial go to check for any leeks. What a difference, it is so quiet compared to the old one which sounded like it was straining, retching it’s guts up as it pumped. Maybe the original pump had something wrong with it before it was installed?

One boat came past having come up the river today, it was now in the green. But as the day progressed so did the force of the wind. We were glad we’d stayed put, hopefully tomorrow we’ll get to see some trains close to.