With Storm Brian on his way we thought it best to fill the water tank today and find a suitable mooring for the next few days. The Caldon Canal only has two water points, one behind at Park Lane, Endon Bank and the other on the River Churnet section at Consall Forge ahead of us.  Looking at Gauge Map for the river levels suggested that we’d had lots of rain yesterday, we kind of knew this already, but the level looked like it was dropping. As we had breakfast two boats came past heading towards the river, they obviously thought it worth a try. A while later a boat came past the other way and chatted to Alex on Tench, he thought that the river would now be in flood. Which way to go? 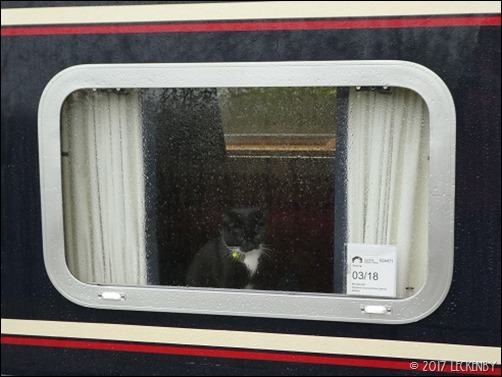 After a hello chat with Alex, who wasn’t going to bother carrying on to the river as time wouldn’t allow her to get stuck for a couple of days, we decided to go and see for ourselves. Tilly wasn’t impressed as she’d much rather have been out in the rain than us, but we needed water. First we passed the winding hole, the next would be just above the lock down onto the river so we were committed now to at least three locks and a couple of miles. 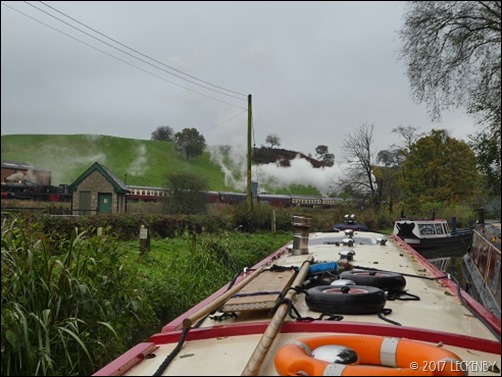 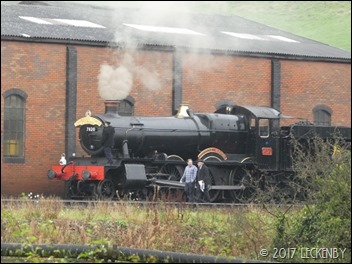 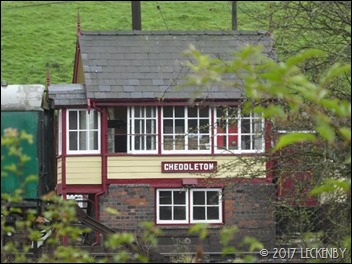 Gradually the rain eased as we worked our way down. Every now and then we could hear the Toot Toot of a steam engine. Churnet Valley Railway are having a 25th Anniversary Gala weekend with trains running from Cheddleton Station to Froghall so when the station came into view on our port side it was busy up there with engines in full steam. We’d really hoped to have been able to moor near to Consall Forge where the station platforms overhang the canal, but if the levels were suitable we’d be heading straight through to get off the river. 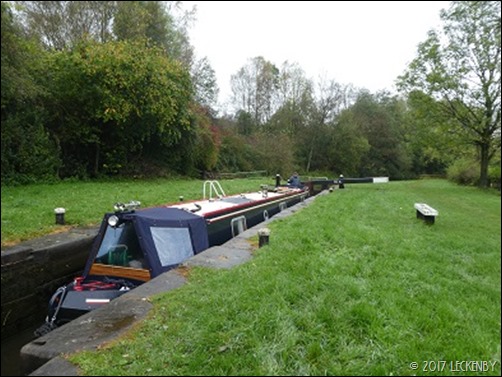 Down the penultimate lock and we could see NB Tilly Mint and friend who’d gone by this morning, they had winded and were moored up. One chap stuck his head out and said that the river had been on red when they got to the lock. We had to carry on anyway to be able to turn, so we’d see what the situation was like when we got there. 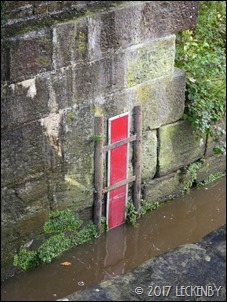 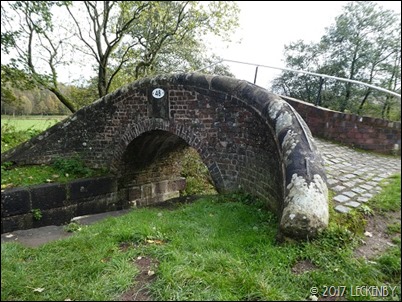 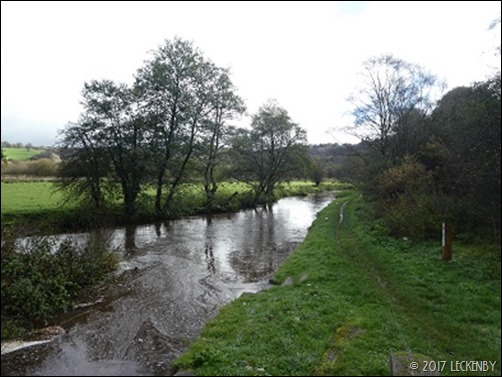 I remembered that the board was in an awkward position so walked over the bridge and eventually found it. Sure enough it was in the red, but we were certain that the green started only an inch further down. If levels were dropping then it might be in the green  after we had lunch. So tied up on the lock landing we waited for an hour. Sadly the level hadn’t dropped, maybe it had even gone up a bit! We couldn’t wait any longer, if we wanted water we needed to retrace our steps and climb another three locks. With the gala on at the railway we wanted to return to Cheddleton too, so we had some shallow miles to cover. 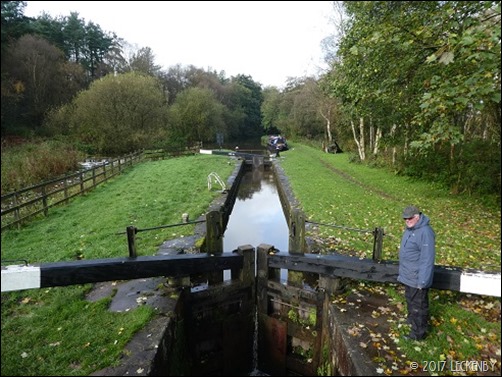 Just as we were winding another boat appeared behind us, windlasses already in hand. If they were sensible they wouldn’t carry on, tight bends on a fast flowing river followed by a weir and a low bridge, not a good idea. 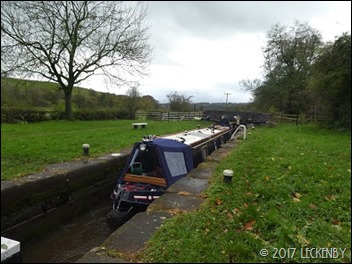 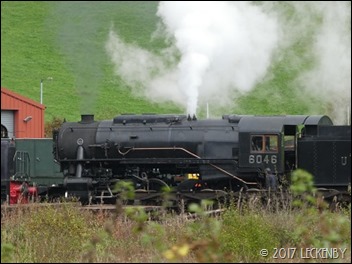 Our journey back to Cheddleton was slow but that gave us more opportunity to watch the trains in steam on the other side of the valley. Back under the aqueduct at Hazelhurst, this time I had my camera already in hand for the two Kingfishers, but of course they were nowhere to be seen! Once up the flight of three locks to the junction we carried straight on towards Park Lane. With enough water in the tank I had a shower as we went along. Of course there isn’t a handy winding hole at the services, you have to carry on another mile to Endon Basin to turn. 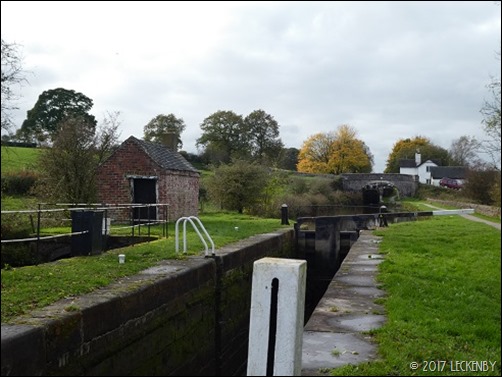 Facing the other way we pulled in and filled the tank, time was getting on. Should we carry on or pull up before the locks? With winds forecast for tomorrow afternoon and hopefully a gulper pump to pick up in the morning we really wanted to be back where we’d started the day, buses would be much easier from there. So with not much day light left we pushed off at 6pm with our nav lights on. I browned some chicken, made a sauce and popped it into my cast iron casserole and into the oven where it should be cooked to perfection by the time we got moored up. 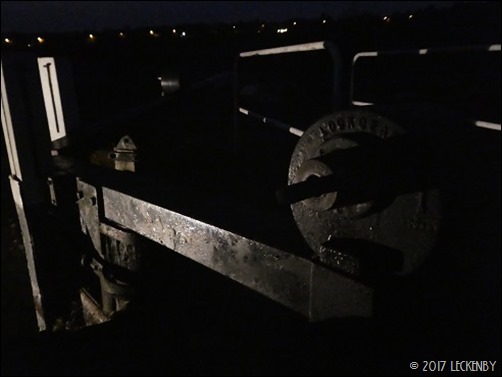 We passed one boat as we approached the top of the locks, he’d just come up, but this didn’t mean that they were all full sadly. Each one needed topping up. There was enough light to see what you were doing and I was glad that we knew the locks with their steps under the arc of the lock beams. Mick turned the tunnel light on, my goodness it is bright! It illuminated my way down to the next lock where I wound up paddles as Mick lifted one on the lock above. By the time I turned to walk back the bow of Oleanna had dropped sufficiently into the lock chamber so that I didn’t get blinded.

No space outside The Hollybush for the night, the 24hr moorings here seem to be at least 72hrs! I got the stove going and then sat at the bow, watching as Mick lit up bridge holes a bit more with his torch. Sat at the pointy end I could see bats skimming the surface of the canal, twisting and turning catching insects as they went. One did an arc around our bow and headed back the way it had come. Then a low swoop of an Owl just in front of us. He stopped and watched us go by before hooting for a mate. We don’t often move at night, in fact this might only be the second time we’ve done it, but it was magical. 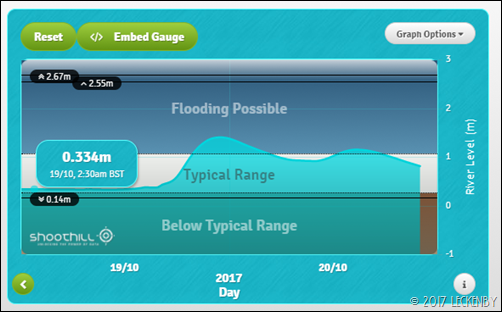 We pulled up on the first rings at Cheddleton. Sorted ourselves out and the chicken was ready and waiting for us. Not quite back to where we’d started the day, but almost. At least we have a full tank of water to keep us going whilst the weather does what it’s going to, just a long way to get it. It turns out the river was rising again when we were at the lock. Hopefully it’ll go down again for us to get to Froghall after the weekend.