Mick got a bike out this morning and cycled up to the shop at Rode Heath for a newspaper so that we’d have one at breakfast time. It was quite damp, but by the time we were ready to move off it had dried up. 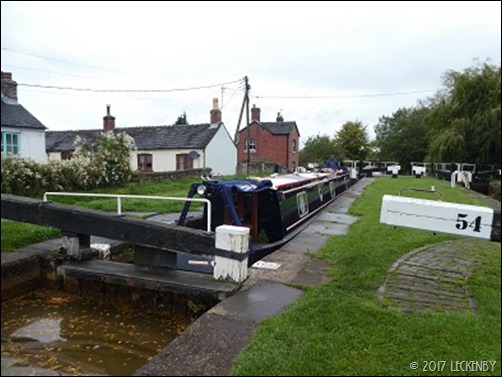 At the first lock we had the choice between two chambers, here we checked Oleanna’s width in the narrow one. Boats over 6ft 10in wide should not use this lock as it has quite a few bows in the sides. We took it steady, just in case but ended up not having to breath in at all, which we knew anyway. So we should fit through the bottom lock onto the Llangollen later in the year. 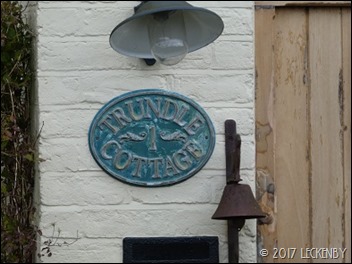 The water from the next lock being emptied announced that there was a boat on it’s way down, so we left the gates for them but I was too late to attract their attention to leave the gates for us. Thurlwood Lock isn’t one of my favourites as it has a gate paddle that is surrounded by a very large metal box, this makes it cumbersome to cross the top gates and when one of your hands doesn’t grip how it used to I’d now rather walk round. But today it gave me another reason not to like it.

I opened the bottom gates, once Oleanna was in I went to close them. They are angled in such a way that they need a good pull/push to get them past their balance point (for want of a better term) to be able to close them. I pulled, then climbed over the gate to push as the beams overlap the lock bridge. I pushed and thought I’d just got it, when it decided otherwise. The damp wooden bridge and my walking shoes repelled each other. I had enough time to wonder if trying to regain my footing was worth while or would that just create a Wile E. Coyte moment. Then more pressing thoughts of getting limbs and arms out of the way of  bridge railings and lock beam took over. Leaving the slippy bridge slightly cleaner than when I arrived I escaped with only a soggy bum. 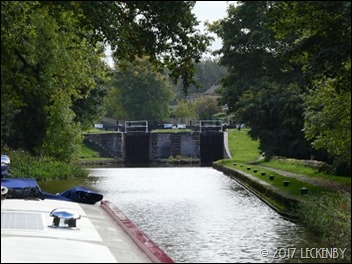 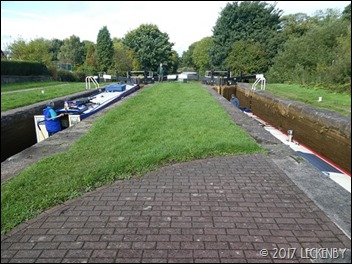 At Lawton Locks I set a chamber for us and then topped up the one next door for a boat coming down. I opened their gate and they did ours and then one boat rose as the other went down, a perfect use of these locks with both boats helping each other. As we reached Halls Lock 49 we considered stopping for Mick to try the bow thruster again. We’ve moored here twice before. The first time was on a hire boat in 2008 with Mick’s sisters Kath and Ann for company. We woke in the morning to snow, so today we decided we carry on and avoid a chilly night. 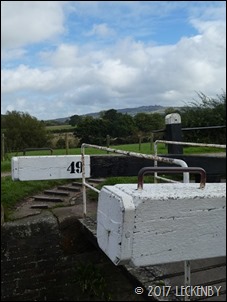 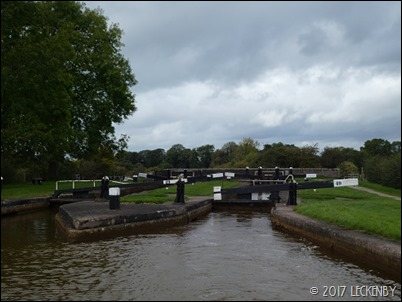 Church Bottom lock was full with a boat coming down the top lock when we arrived. There is a short pound between them which you may or may not be able to pass in. We helped them down and left the top lock ready for us. Soon after we’d started our ascent a lady appeared above, looking puzzled at what we were doing. With no other boats around it made sense to us. Then as we moved from one chamber to the next a boat appeared below, the crew waited to man the bottom lock for the next boat to come down. More boats arrived, whether it was best to do one boat up, one boat down, or a few in one direction was up to them. The pound above was very high, brimming over the towpath in parts. 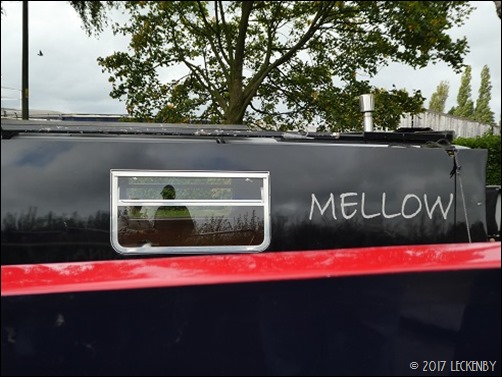 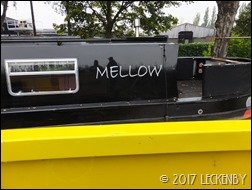 As we passed the dairy farm and NB Mellow, I took my usual photo. We love Oleanna but this photo will never ever be the same as it was with Lillian.

Clearing the last but one lock to Red Bull I could see that major works were happening at one of the locks, so only one chamber would be in use. As I walked up to check on mooring space above the last lock I could see that a boat was stopped and moored in the entrance to the working chamber. It was a Middlewich Hire Boat, just what were they doing? It turned out that they were waiting to tow another of their hire boats that had broken down on the Macc which was just about to be pulled into the chamber to come down. With plenty of space by the C&RT offices we moved up to the next pound. Here we could moor on rings and weather out the forecast storm, do washing, top up with water and get it dry at the services and have a supermarket delivery.

Whilst outside it rained for most of the afternoon we did our shopping, chased and caught a Tilly friend, moved Tilly’s towel from seat to seat to minimise muddy paw prints, lit the stove and stayed cosy.