Alarm was set early and we were up having a cuppa awaiting the arrival of the Lockies and Roger by 7.10am. Roger arrived first and gradually other heads appeared from inside the waiting boats. Next to arrive was Chris and his mate who just went straight to the lock and started to fill it, did this mean we were on our way? The gates opened and Blackbird joined NB Elan to be the first to go down into the brook. 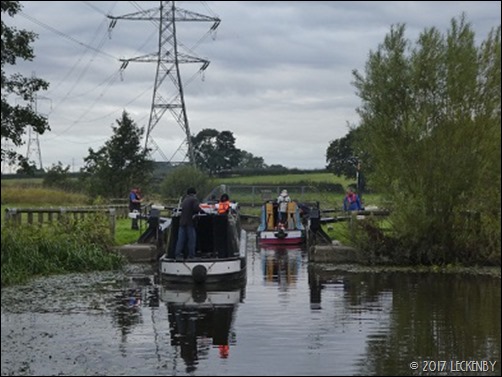 This next section is very narrow and there is only a certain window when it can be navigated due to the tides. It needs to be deep enough for you to float, therefore move, yet shallow enough to be able to get under a pipe bridge and road bridge. Once through you then wait on a pontoon for the brook to continue to rise enabling you to exit out onto the River Ribble. 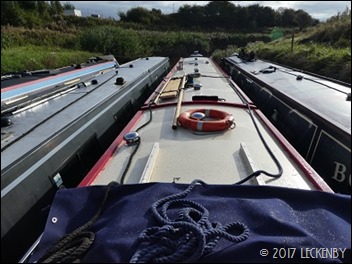 We were the third boat down. Oleanna had difficulty at times with the depth, rising up on some sections. We were glad she wasn’t longer or wider as we think we’d have become stuck. Slowly we made it through and joined Blackbird and Elan on the pontoon breasting up with them followed by NB Bosley. The channel was full. The next two boats came down followed by the first widebeam, each successive boat announcing it’s arrival with a wave of water. Only one more to join us, Mr Widebeam. After sometime we could see Chris walking to peer over the bridge to see where the boat was. No sign. Still no sign a while later. The level was rising all the time, would he get through the low bridge? It turned out that he had got stuck and broken down! Hope he managed to get to a pontoon and out of the way for the boats heading up today! 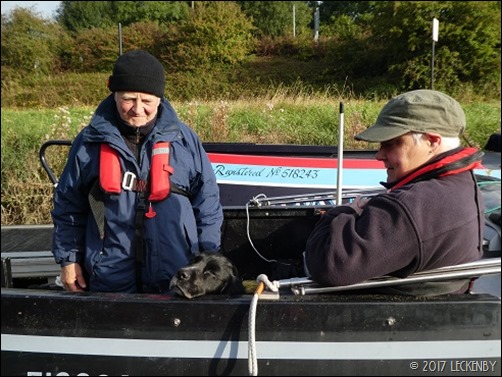 Time for a brew and breakfast whilst we waited for the tide. Discussions were had as to who should go first, some wanted to take the crossing more gradually, so we opted to lead the flotilla out onto the river, followed by Blackbird. At around 9.45am a surge of water met us, soon followed by Chris waving from high up on the bank, we were free to go. 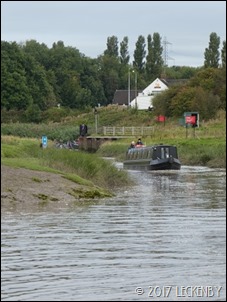 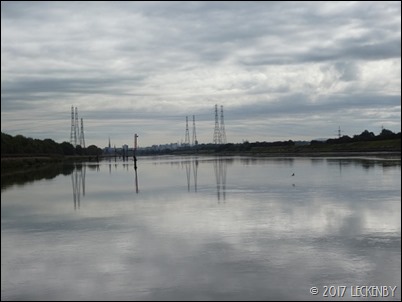 Down the brook to where it meets the Ribble, you could see the flow of the incoming tide ahead of us. Roger suggested that we head out into the flow before we turned, cutting the corner could mean going aground. Soon we were up to 2,100 revs and checking the engine temperature at intervals as we punched the incoming tide at 3mph. Watching the others turn out behind, we’d certainly taken the widest course heading out towards the sea. 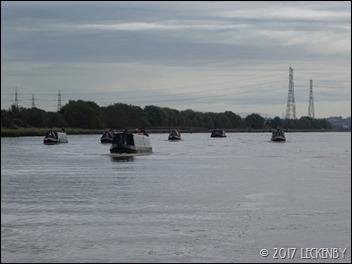 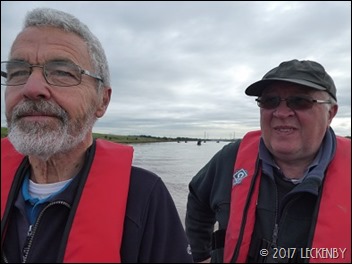 The river gradually widened, a yacht came towards us from somewhere out at sea. Despite the atmospheric grey cloud covering the sky it was a calm day. 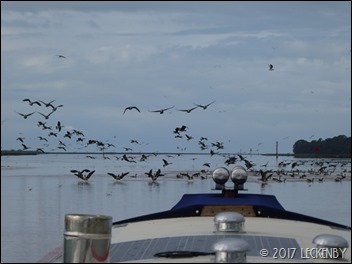 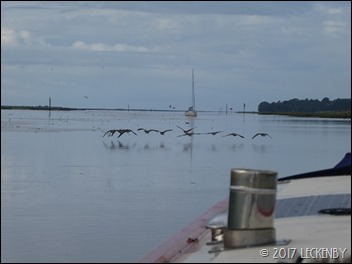 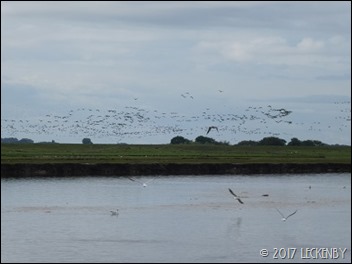 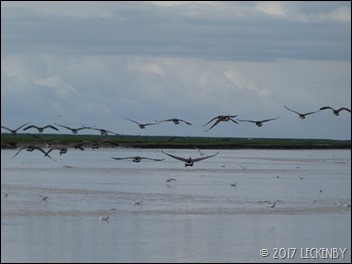 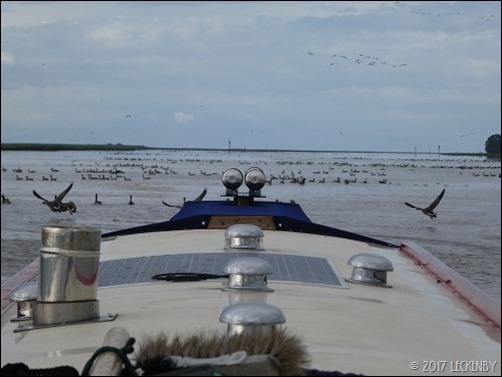 Up ahead Canadian Geese were flying in to land. There were so many they created a murmuration  around us. Some landing, others taking off, others just swirling around. Wow!!! What an amazing sight and to be right in the middle of it all. One of those moments that photos don’t do justice, but will stay with you for life. Video here. (It is 15MB!) 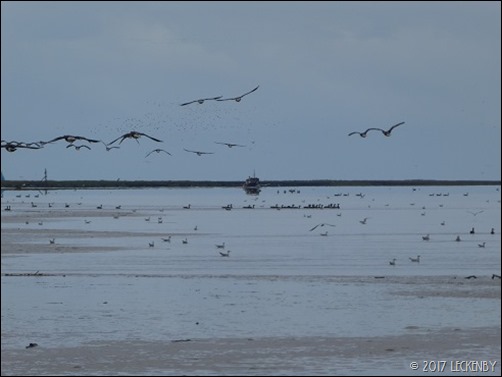 With the camera on zoom I could see ahead to the Astland Lamp where we were to turn onto the River Douglas, here a boat (Gnat) was turning upstream towards us. The crew as they sped past us waved and beeped their horn a couple of times. Were they being cheery or were they about to turn to port? Cheery it must have been as they showed little intent on turning until they had been past the whole flotilla which had now stretched out behind us. 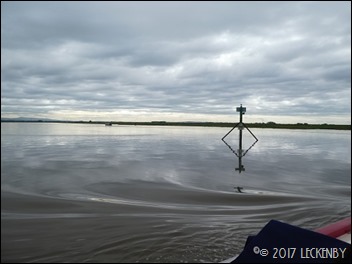 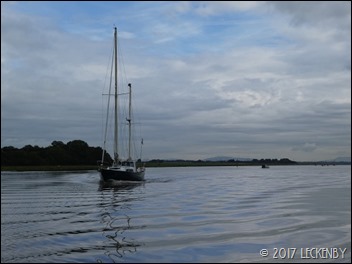 Another yacht was following us all, gradually working it’s way past. Now we could see a narrowboat coming down the Douglas, who was going to reach the Astland Lamp first, us, the narrowboat or the yacht? We gave two short blasts of our horn so the yacht knew our intensions and turned a while before NB Caramia made it there, the yacht carried on out to sea. 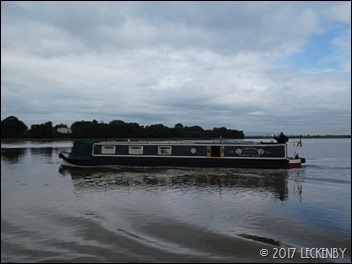 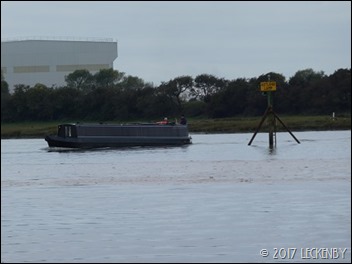 Two more narrowboats passed us heading to the Ribble, it was slack water and we were now making 6.5mph at 1,900 revs positively zooming along. That was until Gnat sped past leaving us to cope with his wash. As we reached the marina with it’s long pontoon Mick called ahead to Tarleton Lock and spoke to Harry. A boat was just coming up and then they would make the lock ready for us and Blackbird. 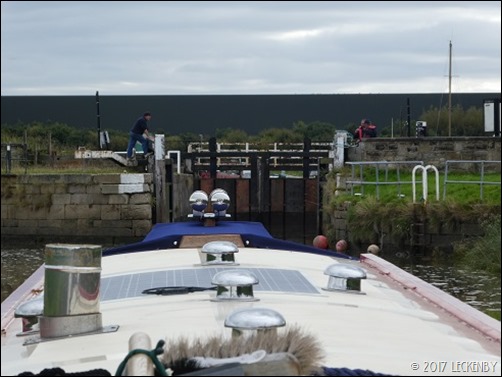 Sure enough the gates were open and three chaps stood awaiting our arrival. At last we’d made it back to the Main Land, what a great crossing it had been. 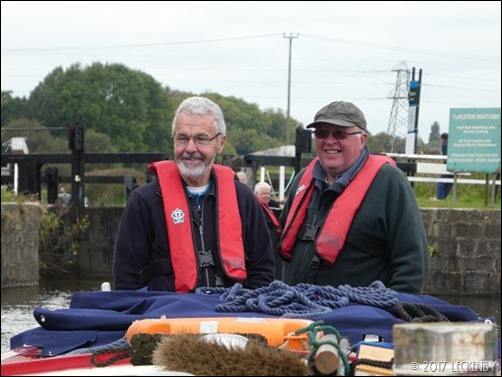 At Town End Swing Bridge we said goodbye to Roger who headed off to catch a bus back to Preston. It’s been lovely spending some time with him and nice that he’s been able to do the crossing with us. Here Blackbird leapfrogged us and carried on through all the reeds to Fern’s Swing Bridge where we swapped positions. They wanted to stop for water at the services as we carried on to St Mary’s to top up with diesel and buy a couple of bags of coal. By the time we’d finished they were setting the first of the locks to rise us back up to the Leeds Liverpool Canal. 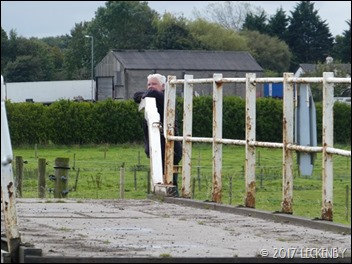 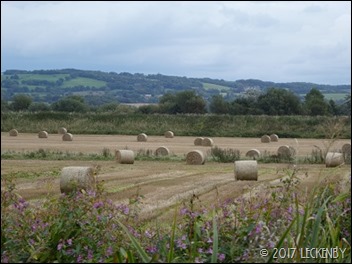 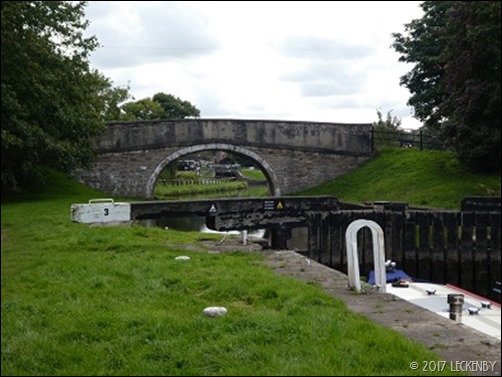 Bridget and I worked the paddles and walked between the locks. Farmers were bringing in the last of the summers crops and large straw bails were sitting in the fields. We tried to moor the boats between locks 2 and 3, but the depth wasn’t sufficient so we carried on to the top. The last lock being the hardest to operate followed by the very stiff swing bridge, it took both of us almost getting hernias to shift the bloomin’ thing! 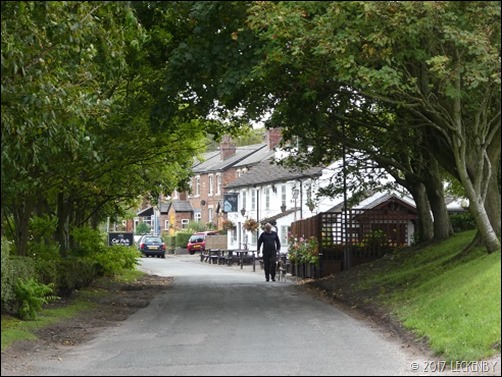 A short distance and through the first swing bridge before we could moor. Showers and a change of clothes were needed before we all headed to The Ship for a couple of pints and a very nice meal. This was to be our last evening together and we were glad of a good pub to spend it in, although we were all really rather pooped after a long day and a lot of fresh air.