Hest Bank to a bit further on

Mick walked up the way to see if there were any spaces further up with a bit more sunshine. There was so we decided to chance getting into the side a bit further up. Our first attempt didn’t go well as the bottom was very visible, but the second gap came up trumps, we were in to the side and level! Here our solar panel would gain some quality rays whilst we had a trip out. 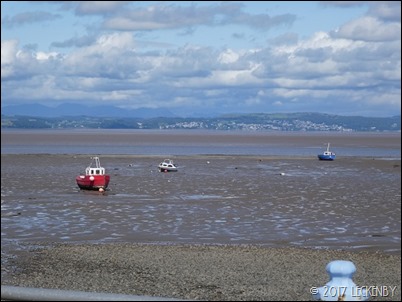 When we reached the bus stop we were three quarters of an hour early for the next bus, so we decided to walk to Morecambe. Down the hill until the road met the sea. Except there was something amiss, the sea! Ahead of us across the bay there was next to no water, maybe the hurricane in the States had stolen it all. What a vast difference from yesterday, sand banks right across the twelve miles to Ulverston. Low tide had passed and the tide was on it’s way in, not that we could tell at this point at all. Boats lay on the mud flats, birds padded around avoiding the quick sand. 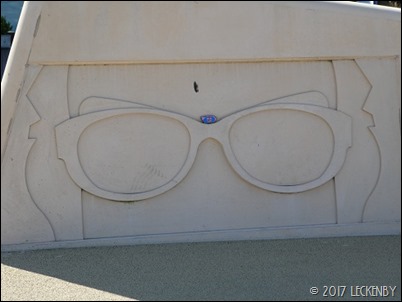 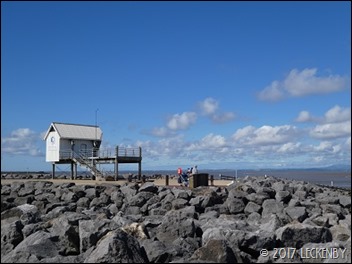 The sun had come out and it was a lovely day to walk along the shoreline. The sea wall here has recently been replaced. The new sea reflection wall measures 1m high. All the openings have names and carvings associated with local things. Most are fairly ordinary but the pair of glasses could only have belonged to one person, but more of him later. Everywhere felt clean and with the mounds of rocks down to the sand/mud it had an antipodean feeling about it. Coming from Scarborough we are used to hills surrounding our seaside resorts, but here as in Blackpool the land is flat, so is the bay, but in the hazy distance the fells of the Lake District give some interest. 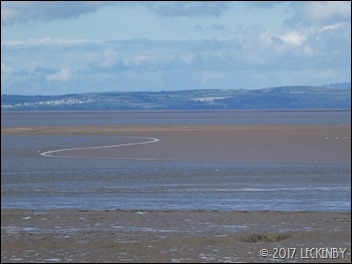 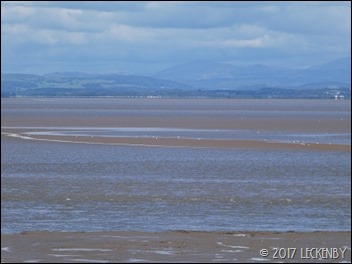 As we walked we suddenly became aware that the tide was now coming in at a rate of knots. An area in front of us where there was a sandbank had a swirl of white gradually crossing it. We could actually see the sea surround the bank cutting it off and then gradually engulf it all within a matter of minutes. The speed was quite scary. Water rose around the boats ahead of us, almost as soon as one boat was level and floating again it sped upstream along the channel of one of the rivers, beaching itself for a short while. 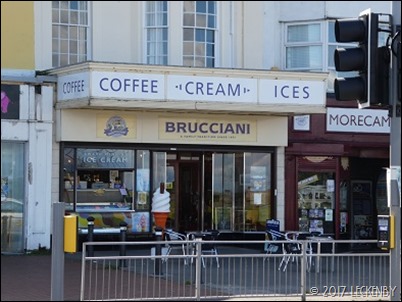 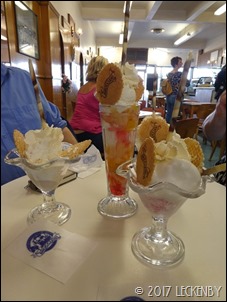 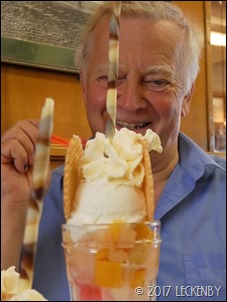 By the time we had reached the shops and Winter Gardens we were in need of some refreshment. Becky had given me a tip off for chilled medication here, so we headed inside to see what flavours took our fancy. Storm had never had a Knickerbocker Glory, so decided today he would change that. The rest of us opted for three flavours. No tea was required. Brucciani’s first opened in 1939, the local paper feared that it might not be good for the sedate Victorian image of Morecambe and that its presence could be positively harmful to young people. It is now a Grade 2 listed building, with it’s simple pale oak high street deco interior it is worth a visit anyway, add in the chilled medication and it is a must. The tables are not big, but then who needs it when you are concentrating on your three scoops. 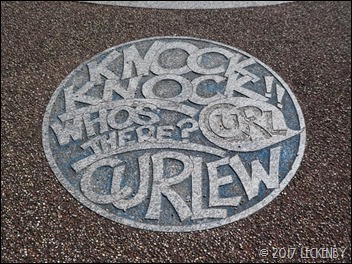 Feeling a bit revived and maybe a little bit high on ice cream we then carried on along the front towards The Midland Hotel and the Stone Jetty. Originally the jetty formed the harbours western wall, built around 1853 by the Little North Western Railway Company as a wharf and rail terminal for both cargo and passengers. It was rebuilt and extended in 1994/95 as part of the coastal defence work and now has games that you can play and many bird sculptures along it’s length. It had only taken our break for chilled medication for all the sand banks to disappear under the water. The sea had returned! 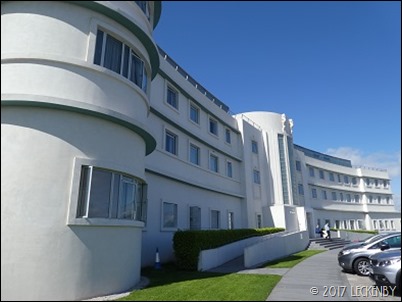 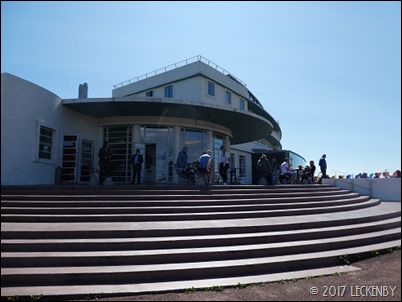 Then we turned to appreciate the Midland Hotel in full, sparkling in the days sunshine. People were on the terrace enjoying a beer, others were starting to enjoy afternoon tea inside. We’d thought about this, but at £21 each we couldn’t justify it. One day we may save up for a night here, B&B would set you back anywhere between £125 for a Classic room to £270 for a Luxury Sea View room. However the rooms have all been reimagined, which means that there are few if any original features left. 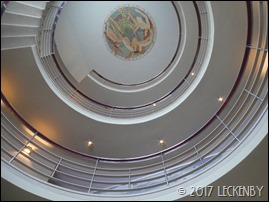 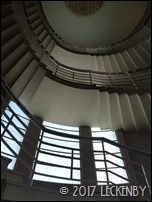 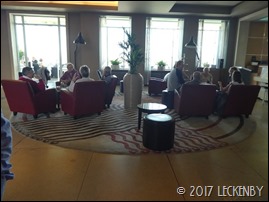 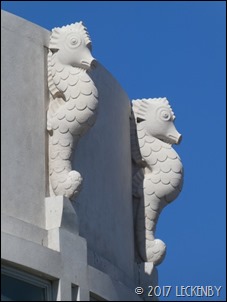 A Streamline Modern building, built by the London, Midland and Scottish Railway (LMS), in 1933, to the designs of Oliver Hill, with sculpture by Eric Gill, and murals by Eric Ravilious. It was built as the railway companies showcase hotel, following the curve of the promenade and making the most of the spectacular views across the bay. Seven years, later during the war, it was requisitioned and it became a hospital. In it’s first year it had treated 3700 patients, 1000 airmen were fitted with spectacles. After years of neglect along with the fall in popularity of Morecambe it closed it’s doors in 1998 and was left to the mercy of the sea. Urban Splash in 2003 came forward wanting to return the Midland Hotel back to it’s 1930’s glory. It reopened in 2008. 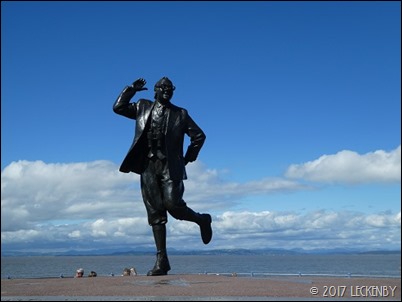 One thing left to do and that was to find Eric. So we back tracked along the promenade. As he faces away from the sea, we’d missed him high above us as we’d been busy looking at pavement decorations and looking forward to our medication. Born in 1926 John Eric Bartholomew took his stage name from his home town, Morecambe. Little really needs to be said about the man who has made us all laugh out loud. His statue by Graham Ibbeson (who also did the scupture of Laurel and Hardy in Ulverston), was unveiled by the Queen in 1999. 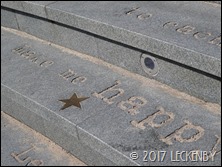 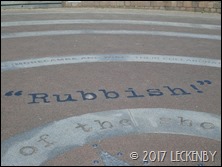 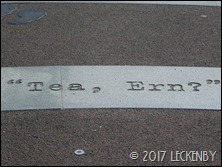 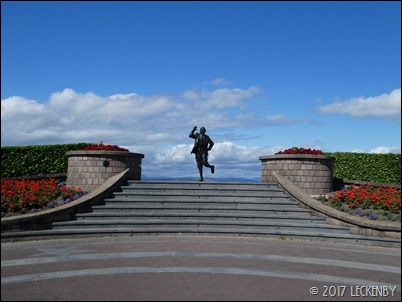 Eric’s pose is a familiar one from the end of Morecambe and Wise. Down the steps are the lyrics from ‘Bring Me Sunshine’, their parting song. A list of stars who appeared on the show with them circle around on the floor in front of him along with every catch phrase. Each one so familiar, bringing a smile to your face. A lovely tribute to the man. 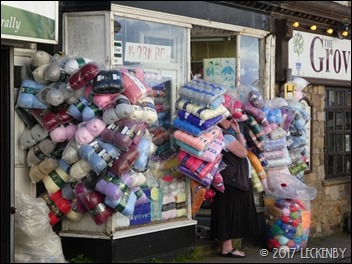 Once we’d found a paper shop we caught the bus back to Hest Bank, the walk back would have been a bit too much! 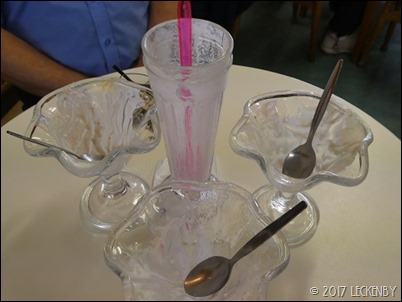