Last night before going to bed we stood out on the back of Oleanna to see if we could spot any of the Perseid Meteor Shower. The sky was clear but we got a touch too chilly to carry on and didn’t spot  a thing. Tonight I doubt we’ll be able to see the sky for cloud, as drizzle has been on and off for most of the day.

Yesterday I’d bought some big field mushrooms in the market so we had these in a white sauce on toast for breakfast. They were yummy and made a nice change to the usual cereal.

Blackbird moved forward to fill with water and then nudged back so that we could top up too. As our tank filled I gave the port side windows a good wash. They had all been covered in a layer of spray when we crossed the Ribble and it was very hard to see through the front windows. Mick popped to Pendle Marine to see if they had a fuse for our bow thruster, but the chap said he’d not seen one of those for years. Maybe he just tends to see cruisers, we’ll try somewhere further on.

A plan was hatched for the day, to cruise up to Bilsborrow where we could explore the thatched village under umbrellas if it continued to rain. Storm walked ahead with Max whilst we brought the two boats. 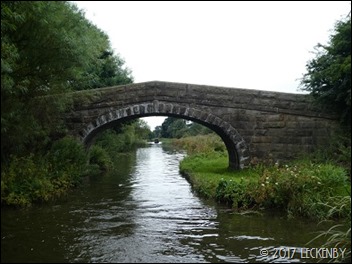 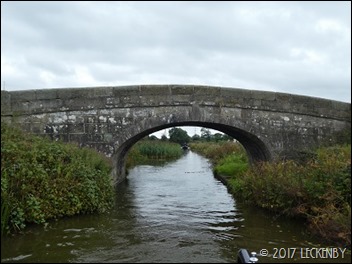 Most of the bridges that we’ve seen so far have a hint of Macclesfield Canal bridges to them. They don’t quite curve in at the bottom like the Macc ones do, or spread as far. Instead the towpath side wall has been chamfered at an angle, maybe to reduce wear on the stone from ropes. The tops of the bridges up to today have been angled with a point at the top, now the design has changed to a more standard gentle curve. 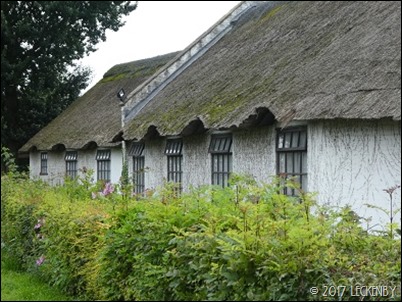 We pootled along the four miles, very few places looked like you’d be able to pull in due to the amount of vegetation. A couple of gaps presented themselves close to Roebuck Bridge but we carried on to be greeted by Storm and Max stood by Owd Nells where there was mooring with rings. Children were feeding the mass of ducks which we managed to avoid squashing as we came into the side. It was very busy here, so we decided to nudge up a little further so as not to be directly outside the pub. Bridget had pulled in before the bridge which was a much quieter option as there is a kids funfair just down from us. 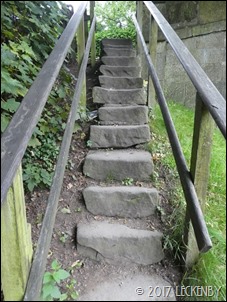 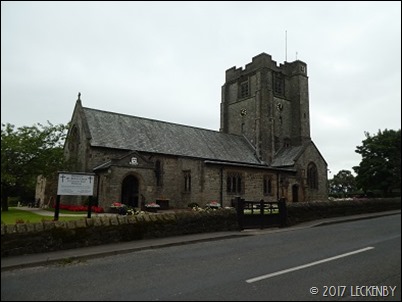 After lunch we decided to have a look round. Walking up to the next bridge and crossing the canal we found a shop for Saturday newspapers and then carried on up the hill to have a look at the church of St Hilda. Built 1926-7, with money left by Miss Sarah Jane Salisbury who died as a result of an accident at Brock Railway Station (long since closed north of Bilsborrow). 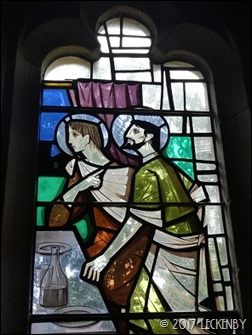 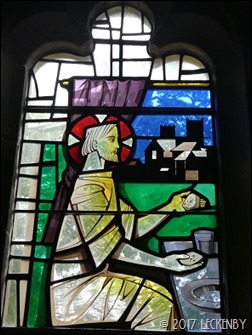 The church sits squatly in immaculate grounds, the flower beds are so full there is no air to breath between plants. The interior is simple stone and oak with only two stained glass windows which are in memory of two former vicars. 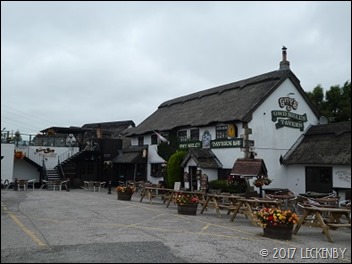 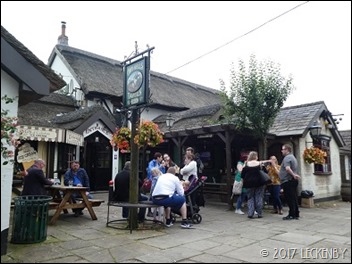 The village has three pubs, one reopening next weekend. None of them drew us inside. Back at Owd Nells we had a look around. Basically there is a restaurant/pub with various out buildings which has all been made to look Olde Worlde. Fake shops back onto the pub with window displays of plastic fruit and veg, but these are just doorways into the kitchens. Most buildings are thatched, one however has every type of roofing known to man. We’d been expecting a small village of thatched cottages a bit like Stoke Bruern, but here it is all just fake similar to Spital Farm on the way into Scarborough. Bridget suggested that maybe we’d found the location for my 50.5 birthday do. It has moorings, accommodation, space for a big barbecue and if we asked them nicely maybe they’d let people camp on the bowling green! Strangley enough the hunt continues for what might become a 51.5 birthday do. 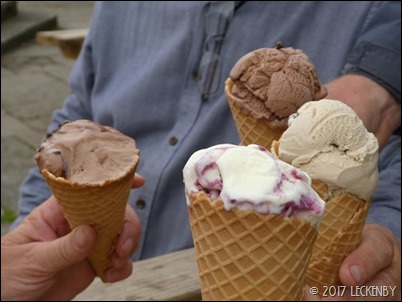 The lure however of a chilled medication parlour pulled us inside. Here we stood in line whilst it took forever to serve the people in front. Eventually we got to the head of the queue, the price was reasonable and our single scoups would have been classed as doubles elsewhere.

It was nice of them to move the outside to a cat fun fair, just wish everyone would leave me to it. All those inflatables needing to be clawed.