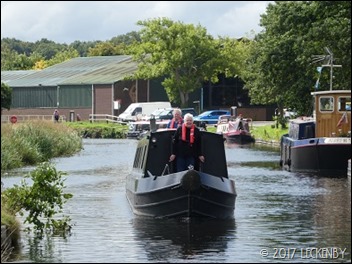 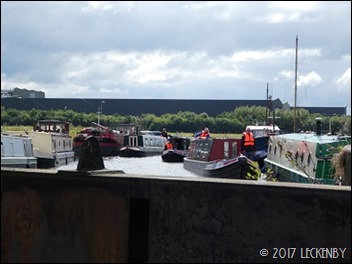 Final preparations were done this morning, removing anything that couldn’t be tied down from the roof and well deck, this meant that the shower got quite full. Tillys escape pod was put on the dinette, the safest place as near the back doors just incase. A call to Harry to check on arrangements confirmed that we should make our way to the lock at 11:40, the wind was quite strong but he didn’t think it was bad enough to cancel the crossing. One thing that might was if Salwick Brook was in flood after all the rain we’d had. He would call us back when he’d heard from the link. This he did after about half an hour, all systems go. He ran through a few checks over the phone and then gave some advice as the wind was quite strong and northerly, instead of keeping right up the Ribble we should keep more to the left to avoid being blown onto the bank. 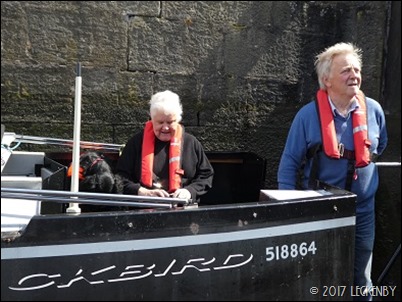 There were going to be five boats doing the crossing today and our two boats were first at the lock, a bit early which meant we had to cope with nowhere to moor up and avoid hitting other boats. Chaps seemed to keep on appearing from all over, none in C&RT blue. In the end seven men were there winding windlasses and pushing gates. Once we were in the lock Harry arrived to hand over a sheet of phone numbers, it felt a bit like meeting the custodian of the Ribble Link and being handed the key of entry. 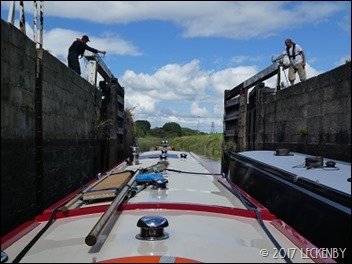 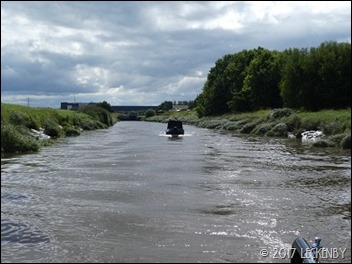 At 11:55 the gates were opened and we were off. Oleanna led the way with Blackbird following. Trying to remember all the tips that we’d been given. Aim for the mast on the bank and then when halfway there keep to the centre. At around 2000 revs we cruised along the River Douglas pushing against the in coming tide, still managing around 4.5 miles an hour. The wind was obvious but not a problem and the sun was coming out to see us on our way. Flood banks are set back which means you get a view unlike on much or the River Trent, to our right we could see hills in the distance. 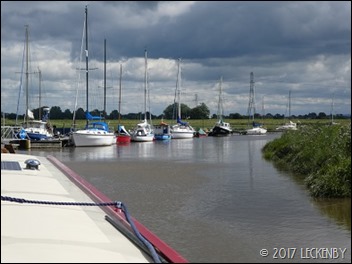 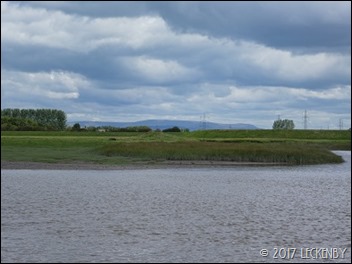 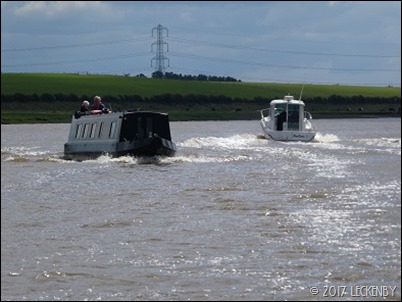 A boat yard with yachts in various states of condition and plenty on pontoon moorings was passed. At the next bend there was a green buoy, blimey we couldn’t remember which side we should pass it on so we went wide and passed it to port. Marshland now stretched out on both sides of the river and the water progressively got wider and wider. A cruiser came round a bend with some speed, helped along by the incoming tide. Turning into it’s wake we rocked over the highs and lows with out prop changing tone as we went. 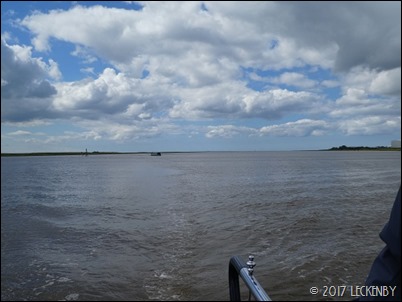 There’s not many landmarks to navigate by and the map in the skippers noted suggests that there are more markers than there actually are so when a yellow sign stood out from the horizon we knew we were nearly at the steep turn onto the River Ribble. Line the buildings up with the Asland Lamp (spelling from the skippers notes) and then keep to it’s left and turn after it. If you turn before you are likely to end up grounding on a submerged wall or sandbanks. Looking behind after we’d turned we could see the estuary stretching out behind us, sea meeting sky, somewhere in the distance was Ireland and then America. NB Blackbird looked so small as we started to head our way up the River Ribble. 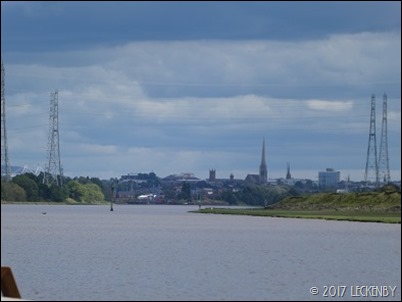 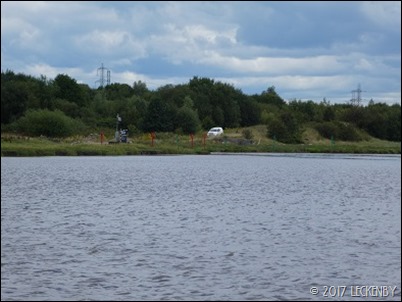 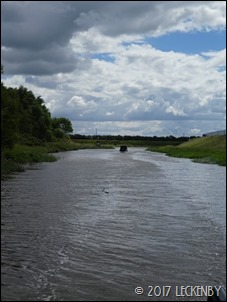 More markers here so we could count down our arrival at the 2 mile perch. From here we called Steve to inform him of our arrival. He was sat in a van at the side of the entrance to Savick Brook and flashed his head lights. The turn into the brook is where quite a few people get caught out, cutting the corner where there is a sandbank. Storm from Blackbird had been advised to wait until you could see down the brook before turning, doing a 90degree turn. The tide now going out made us drift slightly towards the bank, but we made it into the channel safe and sound at about 1:30.

The rolling sealock was open for us so we could sail straight on. Here we found another boat waiting on a pontoon. Where had they come from? Yesterday there had been eleven boats do the crossing as the previous day the weather had been bad. NB Mr Blue Sky had been the eleventh boat and the depth of the brook when they reached it had not been enough for them so they were diverted to Preston and finished their journey today. 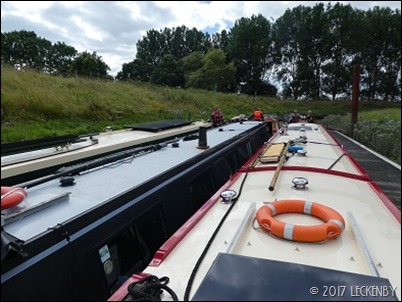 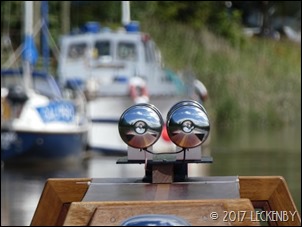 We now had to wait for the other boats. On our way over we’d looked back expecting to be able to see the next two boats that had been penned down behind us, but they only came into view as we turned into the brook some two miles behind. Cups of tea all round as we waited and chatted. The next two boats arrived closely followed by the third and final boat. Kind of glad we were ahead as I suspect we’d have been tempted to over take them. Oleanna’s engine had enjoyed the crossing pushing against the tide and her temperature gauge had stayed at a steady just under 90 degrees, no need to run off hot water. 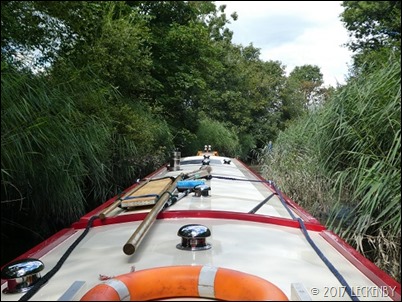 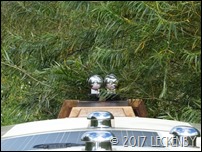 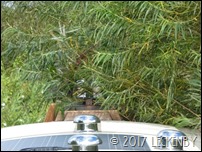 Now in the hands of Steve and another blue T-shirt wearing lockie we started to make our way up the link. From vast open views we were now in the Lancastrian Amazon. A narrow windy channel surrounded with bamboo and Himalayan balsam. The snake of six boats gradually made our way to the first lock which then lockies operated for us. As we’d been the first two boats to arrive we were now the last two to work our way up the five locks. This all took time, a reshuffle of boats up at the front and then a lot of faffing with ropes from the boats in front of us. 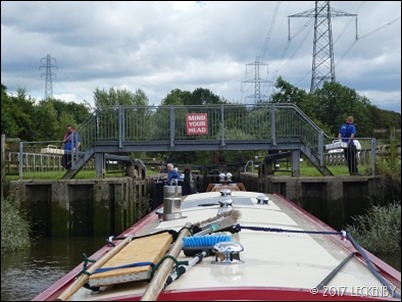 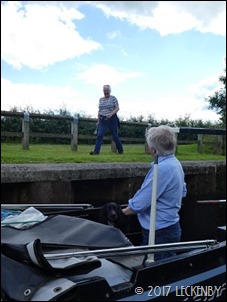 Once the Lockies had gone on ahead to work the staircase Bridget and I worked our two boats up. It was nice to be stretching our legs. 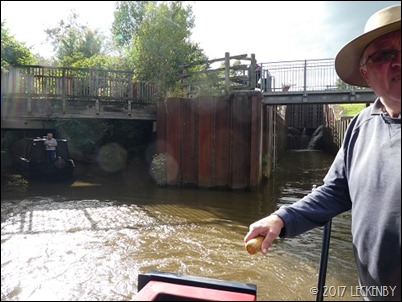 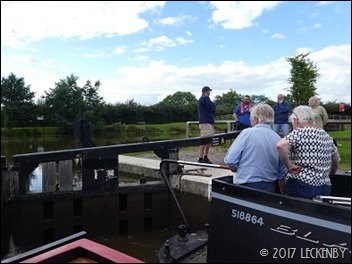 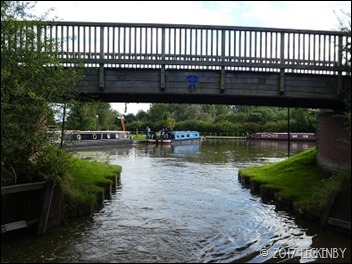 Arriving at the staircase you quickly realise why you have to do these backwards, both up and down. When they built them they were limited to what land they could use, so the angle of entry is really awkward. The above photo is not a panoramic view. To the left is Blackbird coming from the rest of the link, Mick has just pushed our stern out to back into the lock behind his right shoulder. Here again the Lockies penned us up the three chambers. Not quite like Bingley, more concrete, but odd to be rising with gates behind us. As we reached the top a group of waiting boaters (they leave tomorrow) were there to help us wind and get on our way. 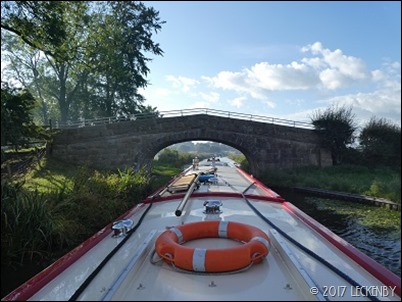 At the junction with the Lancaster Canal we turned left and headed away from Preston in search of a pub. We passed two of the boats we’d done the crossing with and were soon surrounded with fields over crowded with sheep freshly shorn. 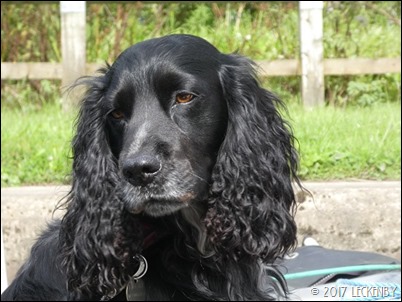 That woofer had been allowed on Blackbirds roof all day, now I got chance to feel the wind in my fur and watch the cows and sheep as i sat on the roof too. It was a suitable reward for having spent the day down below in my escape pod just incase. I didn’t mind it actually as the door had stayed open all day. Max was however allowed to jump off his roof, I wasn’t! So not fare!!

The Hand and Dagger looked like a good place to stop and our guides suggested that there were moorings. So on we pressed doing nearly another four miles to reach a goal of beer and food. The other two boats from our crossing were moored up here. So we tried to join them, but after a few attempts we weren’t going to be able to get far enough into the side. There had been some space back through the last bridge so both boats reversed back to see if we could get in there. Blackbird ran aground but managed to push off again. It was a lot of effort to then not be able to get fully into the side, we’d have had to breast up too and that wasn’t good near the bridge. 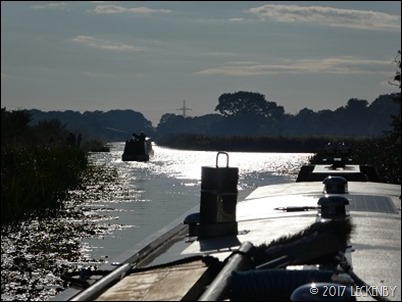 On we went just that bit further until finally we both managed to get close enough into the side to moor up. A quick spruce up and we were off back down the towpath to the pub. What an enjoyable day. Hope it’s as easy on the way back!