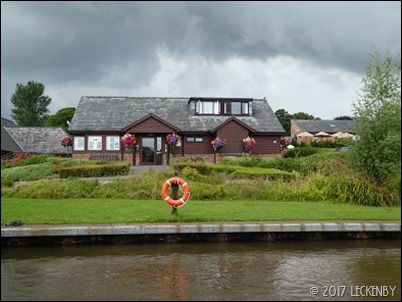 Once down the last lock we turned into St Marys marina where we filled with diesel. Our tank was down to a quarter full as we last filled at Wheaton Aston almost a month ago. The chap came out to meet us and felt sure he remembered our boat from three years ago, that was until we said how old she was. At 59p you can’t go wrong and because of this their turn over is quick. 123 litres later we pulled out and carried on northwards. 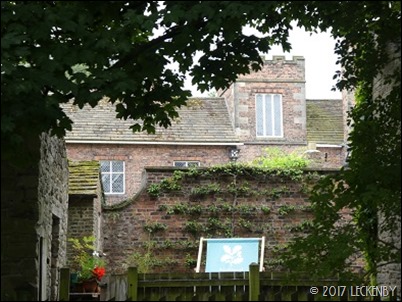 Passing Old Rufford Hall we wondered if their apples were ripe yet. We visited the hall and gardens back in September 2014 on Lillian. Short of an apple to go in a stew that night, we somehow managed to leave the grounds with one in a pocket. It made all the difference to the stew.

Up ahead was a boat we’d seen following us down the lock and we tried to catch them up before the swing bridge. They were travelling with NB Bittern who had been in Liverpool with us. The bridge closed as they went through, but then as the lady started to cross she saw us and went back to swing it for us too. Above and beyond the call. Next we wanted to stop to fill with water and dispose of any rubbish. We thought everyone would be doing this but they cruised straight past. It is advised to cross the Ribble link with plenty of diesel and water. This stops any crud that may be in the bottom of your diesel tank from being swilled up into filters if there is a swell and should your engine start to overheat you can drain off a tank of hot water to help keep it cool.

With both tanks full we pulled up a bit further ahead for some lunch. However we should have kept going as a very dark line of cloud was coming towards us, as though someone had drawn a marker across the sky. It started to heave it down. After about an hour it settled into just raining so with full waterproofs on we carried on towards Tarleton. 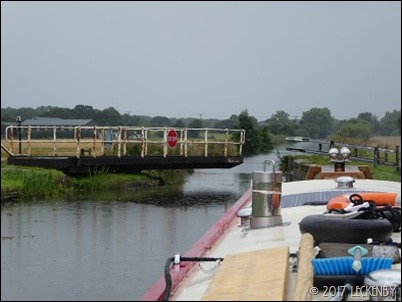 The next swing bridge didn’t look right as we approached, it was neither open or closed. Mick had to give it a hoik with the boat hook so that I could get across, my arms were too short. A boat had come past us whilst we’d been moored in the torrential rain, I suspect he found it hard to lock it, or maybe thought he had but it had then swung back open.

The channel now becomes very narrow through plenty of reeds and weed that we’ve not seen since the Chesterfield last year. We passed quite a few canoeists who seemed to be enjoying getting very wet. Then came a boat, a widebeam with hanging baskets on the sides and plenty of flowers on the roof. Mick pulled as far over as he could, they got the tree side. As they scraped their way through a lady came from below telling the chap at the helm to mind the baskets in the trees. Did she know we were there?!

Several blasts of reverse to clear weed from the prop were needed to keep us going. At one point we ended up in the reeds. Mick pressed the girlie button, knowing it was a mistake as he did it. The bow thruster made a slowing noise and then nothing. No power, possibly a blown fuse, possibly weed. 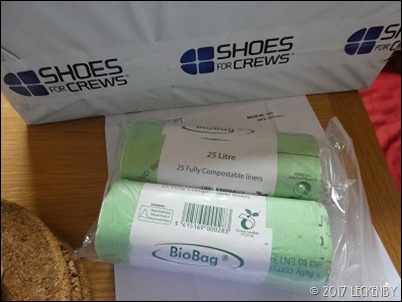 As we approached the last swing bridge we could see a familiar black boat on the visitor moorings. NB Blackbird had made it to Tarleton earlier in the day and missed much of the rain. They had been for a nosy at the lock and around the town and were returning just as we were finishing tying up. They had very kindly been a postal address for us so two parcels were handed over. New non-slip shoes for Mick and some biodegradable bags for our composting toilet to try out. 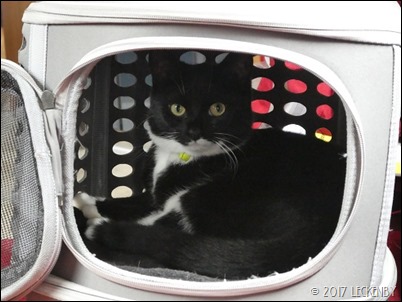 Bridget and Storm have a woofer! Not too sure about this. He does seem a jolly chap, but he came to say hello on my boat! They didn’t think I’d noticed. Apparently we will be spending some time together, not sure about this either. Think I preferred travelling with Jaffa, he did look tasty. My preparations are done, escape pod has been put together and I’ve spent all evening checking that it’s still comfy. Verdict, it is, just so long as the door stays open.

Preparations for the Ribble were set in motion. Skippers notes printed off. Mick put together the new rope and chain with the anchor and laid it all out in the well deck for easy deployment. A loaf of ginger cake was made. A load of weed was removed from the bow thruster, but a fuse had also blown. So until we can get a replacement fuse we don’t know if there is anything else stopping it from working. Good job we spent three years without one. 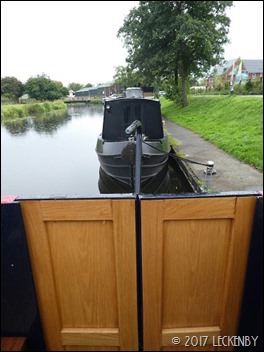 We had a few hours working our way through a couple of bottles of wine with Bridget and Storm, catching up on each others news and comparing notes for tomorrow.