Boats were coming from everywhere this morning, we’d only had a trip boat come past last night after we’d moored. We had to hold back before we could push off, waiting for a suitable gap in what felt like the constant flow of boats. 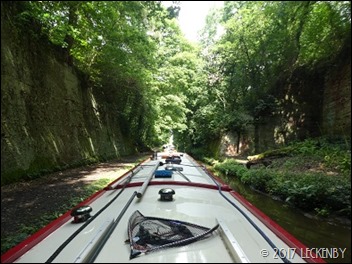 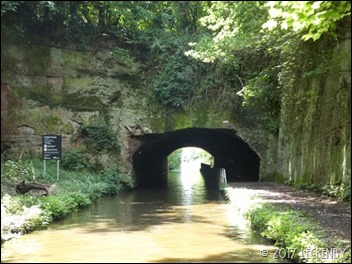 Not far away we came to Cowley Tunnel, the Shroppie equivalent of Harecastle Tunnel on the Trent and Mersey. Well not really, Harecastle is 2926yrds long where as Cowley is 81yrds! But they are both tunnels on canals heading northwards. We waited for a boat to come through so we didn’t have to pass them mid tunnel. Despite it’s lack in length, it’s construction straight through a piece of rock makes up for it. 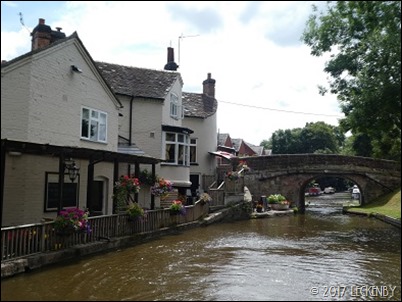 Gnosall follows shortly afterwards with The Boat Inn sitting alongside the canal. We pulled in to fill with water, we’d been giving our not-so waterproof coats a wash with the aim of giving them a waterproof spray today whilst they were still damp. If this doesn’t repel water then we’re looking at new coats before winter. 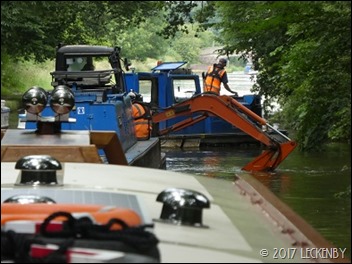 Dredging works were going on between the next two bridges, we’d been warned about them by another boater by the water point. So we slowed down as we approached the dredger, two skip boats and a tug. A fresh skip had been brought to be filled and another was ready to be taken away. We trod water whilst we waited, a couple of hire boats joined in with the waiting too. As soon as the tug was moving off with the full skip the dredger started scooping out mud again. Half a dozen bucket loads and then he was told to stop by a colleague and we were waved on. Only problem was that we had to pass on the off side and very soon grounded. Backwards and forwards the throttle went to try to get us off, but with little space to be able to swing this took ages. Once we were clear the dredger grabbed a few more loads before the first hire boat came through. 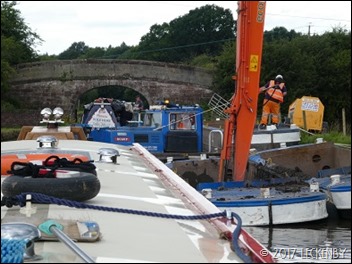 The tug was depositing the full skip at the next bridge where a large digger was waiting to empty it into a field next to the canal. We trod water again waiting for a gap big enough to go through. As we were waved on another boat appeared on the other side of the bridge, they trod water as well until they decided to go for it. But just as they’d come through the bridge hole the tug decided to reposition itself, oh it was like three jack knifed lorries all together. Ropes were pulled, reverse engaged, hard over, until finally the approaching boat could pass. Then it was our turn, luckily this time it was on the towpath side so it was far easier. 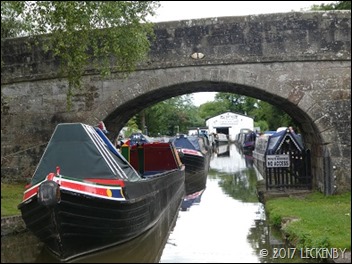 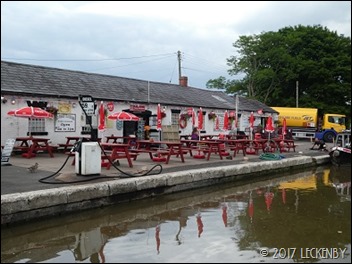 Shortly before Norbury Junction we pulled in for a bite to eat and to let the hire boats return to base. In the past we have eaten at the Junction Pub here, but last time our Sunday lunch was a disappointment and we wanted to get a bit further today before stopping. The diesel price here was 59p, not bad, certainly the cheapest that a boat yard does. 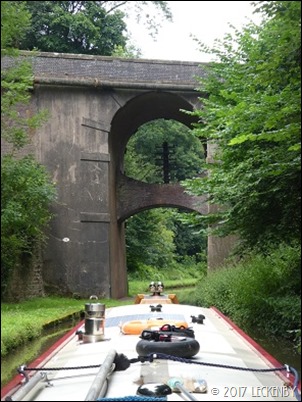 The start of Grub Street Cutting has a famous canal landmark. Yes that double arched bridge with the telegraph pole in the middle. We slowed for photos to be taken and then entered the cutting. 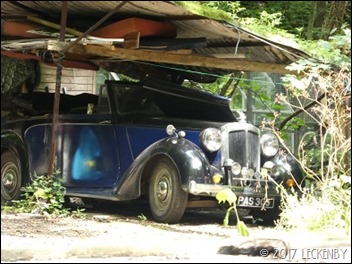 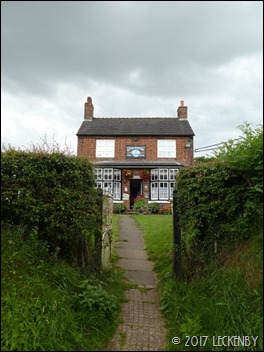 More trees and high sides surrounded us. Towards the end of the cutting on the off side there are several boats moored and behind them in the woods is a caravan and various sheds. Under one structure is a rather wonderful electric blue car (Daimler DB18 convertible?), fairly sure that there used to be another red one here too but there was no sign of it today.

Not much further and we’d reached our destination for the day, the visitor moorings outside The Anchor Pub. We’ve once succeeded in having a pint here before, it’s not always open. The landlady opens up for her convenience not for the drinkers. The door was open when we arrived, just hope it’s still open this evening as we need to have a couple of pints to celebrate some news we’ve had today. 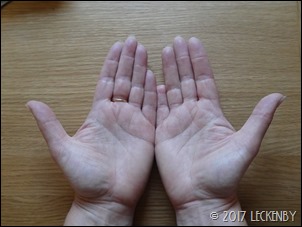