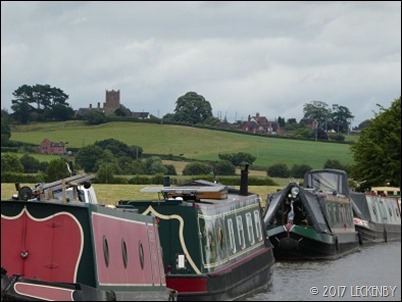 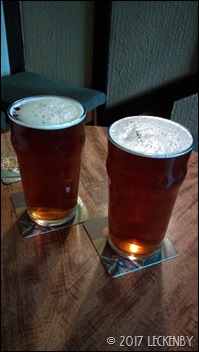 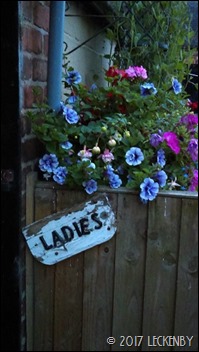 Last night we enjoyed our pie that we’d bought in Brewood, half the size of a junction pie at Norbury. Then we joined other boaters at The Anchor for a couple of pints of 6X, the only beer they serve. Olive, the landlady was on hand, 83 but certainly doesn’t look it. Last time we managed to drink here she was on holiday and the pub was being looked after by friends or family, at last though we got to meet the legendry lady. Why legendary? She has been landlady for a very long time, at least the forty years that Mikron have been performing at the pub. She pulls your pint of beer with two pulls on the pump and then puts it to one side before topping up your glass from a plastic jug she keeps under the counter. 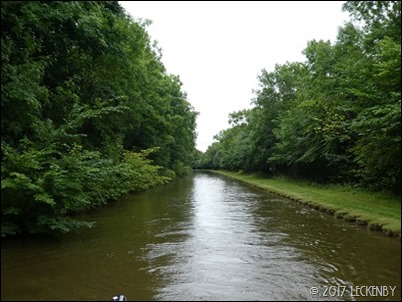 Everyone else seems to move before we do along here. Boats were coming from both ways as we had our morning tea and breakfast and once again we had to wait for a gap before we could pull out. A mile on and we were on Shebdon Embankment. The views from here must have been fantastic before all the trees grew so high. During WW2 the embankment was closed off at night with stop gates in case it was bombed, this would stop the seventeen mile pound from emptying very quickly. NB Susie Q in front of us had pulled over  and was trying to make her mind up whether to moor up for the day, we said that her chickens would love it there to which she agreed. Mental note made for next time we pass it would be a great place for a barbecue as the towpath is wide and green. 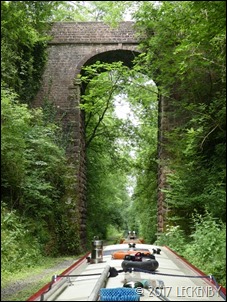 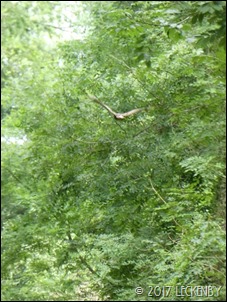 Long lines of moored boats kept us moving slowly onwards to Woodseaves Cutting. About a mile long the cutting has steep sides and is quite often closed due to trees falling across the cut. High Bridge welcomes you into the narrowest section and up ahead we could see a large bird flying between the trees. It wasn’t a heron as it was brown so possibly a bird of prey of some sort. Here you really don’t want to meet anyone coming the other way as passing could well be problematic and the offside paintwork of Oleanna wouldn’t have appreciated it. 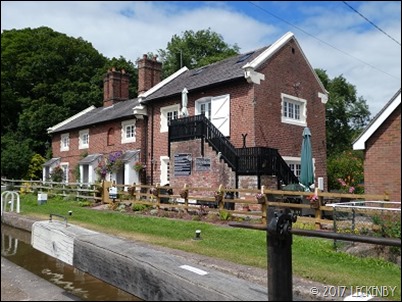 Above Tyrley Locks we pulled in for some lunch and could warn a boat waiting to go through the cutting that we were being followed at a distance. After a rest we started down the locks a chap who’d just come up helped with the gates of the first lock. There was quite a strong cross wind, so we got into the rhythm of me going ahead to set the next lock, open it up and then come back to open and close the gates on the lock Mick had started to empty behind. This means that the boat can move straight from one lock to the next with purpose and not get caught by the wind. 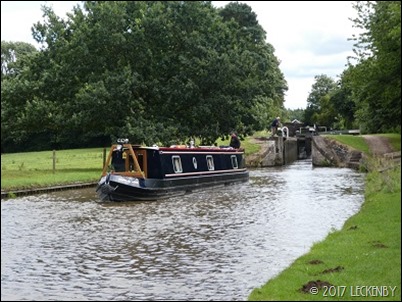 The forth lock just needed topping up, so I opened up the paddles and opened the gate ready for Oleanna.  I could see a boat was rising in the bottom lock, so didn’t waste time in heading back to let Mick out of the chamber above. When I returned a lady from the other boat was waiting for us. I chatted to her and then she asked if I knew the flight. ‘No, I’ve only done it once before about seven years ago’. Well I was then reprimanded for not letting them have the lock as the pound below is rocky and you can’t moor in it. She pointed out signs on the bottom gates, saying to set the next lock before leaving this one and not to moor in the pound. I can’t say that there were no signs on the top gates, but I certainly hadn’t seen them. She then went to explain to Mick that her husband would have to stay in the lock and he wouldn’t be able to pull very far over due to the rocks. Have to say we weren’t expecting them to exit the lock and moor up, more to pass in the pound.  I apologised as I was now expecting both of our boats to ground on rocks as they traversed the pound, but this didn’t happen. I apologised to her husband too and he seemed a bit miffed too that he’d had to sit and wait in the lock. I don’t like getting things wrong, I’d not seen any signs, if I had I’d have emptied the lock for them. But I really don’t understand why they were miffed as we set the lock for them and nobody got stuck, they just had to sit and wait a while in the lock. I suspect the signs are more for single handers, or those who pull over to set the next lock ahead as you most probably can’t get off your boat. Oh well. 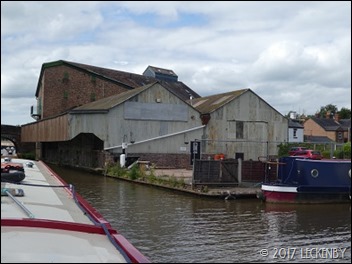 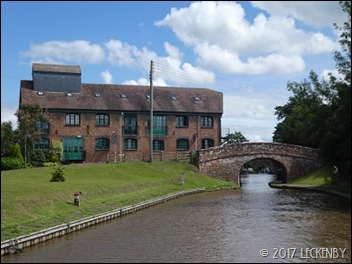 A short distance now to Market Drayton, which was going to be our destination for the day so that we could easily get a paper in the morning. But it was a bit early to stop so we cruised on through. We were now back onto slightly more familiar water, we’ve been to Market Drayton a few times, one day I’ll tell you all about it. We didn’t remember the pontoon moorings, which looked new on the offside after Betton Mill. 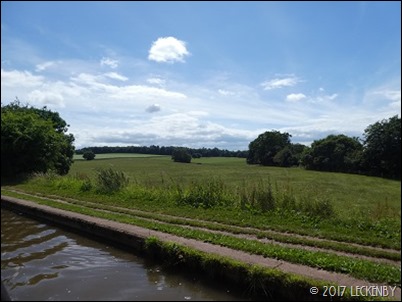 Another three miles of Shropshire countryside all far greener than we’ve seen for a while. At Adderley Locks we decided to carry on down them to try to get a bit more ahead of where we should be. All bar one needed setting and that was only because a boat was coming up. I seemed to impress the chap coming up by pushing the bottom gates open whilst standing on them, I still won’t jump from one gate to the other, my legs aren’t long enough. To close them Mick pushes the off side gate with the boat hook which saves me having to walk round. The by washes can be furious on these locks and push you right over, coming down isn’t as bad as going up as there isn’t so much to hit on your way out of a lock. 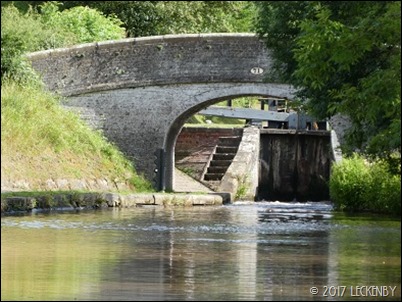 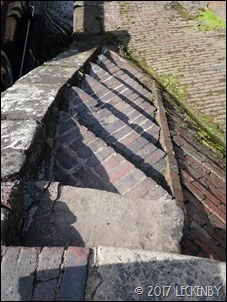 Tilly has spent the evening searching for friends in the fields. According to a lady in the pub last night, if we didn’t feed Tilly she would hunt for food rather than find friends to play with, therefore the body count would be less. The downside to this is that I doubt we’d ever see her again as she’d have no reason to come home, cat love is more like cupboard love! I’d still love them, anyway who’d move the outside for me? It can’t be moved with me in it!