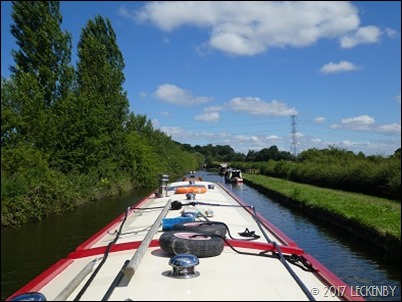 By the time we’d had our breakfast and were ready to push off today the long line of boats that we’d joined yesterday had just about disappeared. More boats came past including one going at quite a speed, this didn’t help him when he reached the bridge behind us as he gave it a mighty biff with his stern. We wondered if our later start would mean that there would be nowhere left for us to moor as we headed northwards under blue skies. But we must be in the lull for hire and shareboats in this area at this time of the week, as the canal seemed to be much quieter than we’ve been experiencing lately. 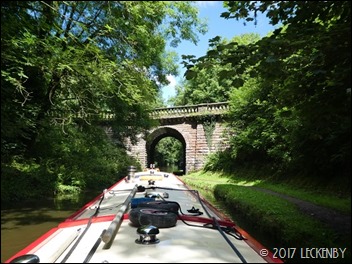 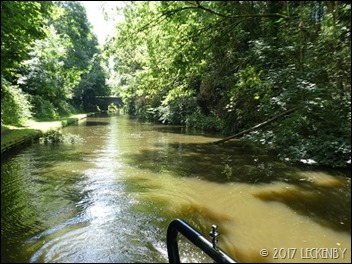 The Shropshire Union main line was the last narrow canal route to be built in England. Therefore it has next to no meanders, instead of clinging to contours Thomas Telford designed it with cuttings and embankments keeping it as direct a route as possible. The earth from the cuttings was used in the construction of the embankments. Large views across fields are broken up by the tree lined cuttings. At this time of year you feel like you are travelling through a tunnel made from trees with dappled sunlight creeping along the roof of your boat. Some of the trees must have been planted when the cuttings were made and then others self seeded themselves. Quite a few look precarious on the slopes and others have grown far too big and given up the challenge. We came across one such tree this morning, spanning the cut, passable in neutral. 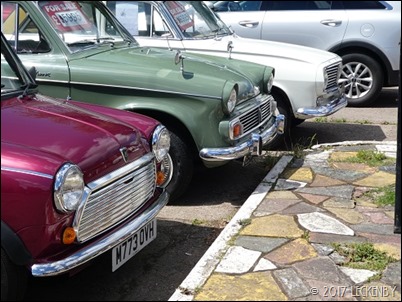 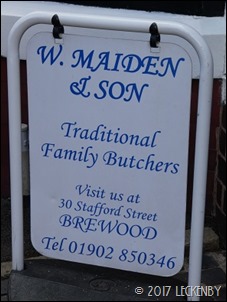 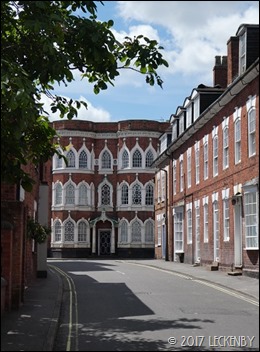 There was a lot of space at Brewood which was handy as we wanted to pull in to pick up a few bits of food. A walk around the pretty village to Coopers for some veg and then down the side street to the butchers we found in 2014. Mick hasn’t had a pork pie in ages and a steak and kidney pie shouted out to be bought. 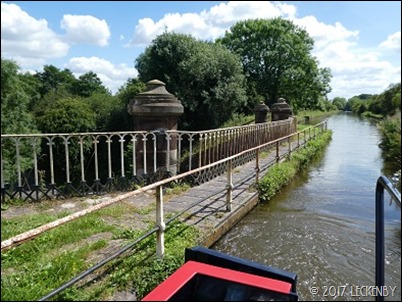 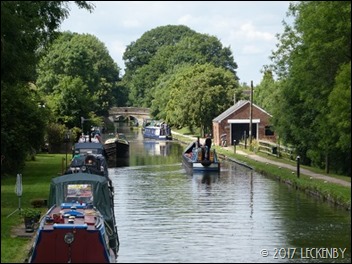 After lunch we pressed on over Stretton Aqueduct passing over the A5. Wonder how many times we’ve passed over Watling Street on our way from London, today will be the last time. The aqueduct has seen better days, a wire brush fertan and some black and white paint along with a lot of weeding and it could be quite a picture again. A mile or so further on was Wheaton Aston Lock, the only one for today. It needed filling as we were following NB Halsall, the coal boat that looks after the four counties ring. A lady started to chat with Mick. Fifty years ago she had come on a charabanc outing for a boat trip from Wheaton Aston, the chap at the helm took a fancy to her and she likewise. There was to be another outing on the boat, but this time it would mean staying over. The only way she was going to be on the trip was if he married her before hand, which is what happened. She and her grandson helped with the top gate of the lock and then returned to near the service block where her husband was waiting in a wheel chair, sadly the towpath looked a bit rough to get him any nearer to the lock. 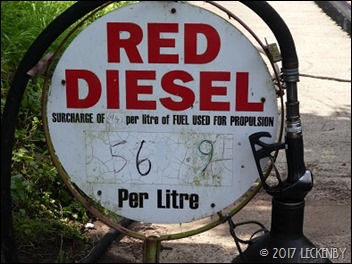 Through the next bridge was Turner’s garage. This is a road side garage that has a hose down to the cut and is well known by boaters. No wonder at 56.9p a litre! The chap comes to clear the pump back to zero and set it going for you whilst you fill up. Keeping an eye on the pump is a little bit hard as it is way up high. He was a bit surprised that we filled up with the exact amount a boat four ahead of us had taken, but we did a different split. Whilst Mick paid Halsall went by, we normally like to support the coal boats, but at this price he’d not blame us. 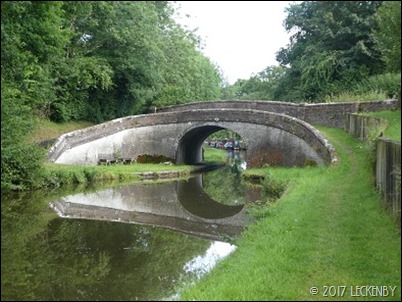 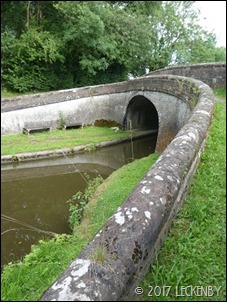 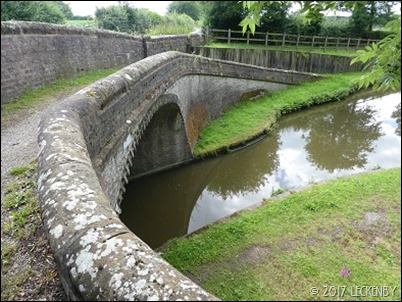 More cuttings and embankments before we could stop. The really good views sadly are where the shelf is at it’s worst, so we carried on for a while longer. First place we tried would have been great, except Tilly would have terrorised the next door neighbours! So we pulled on a bit further and eventually stopped through the next bridge. It is the best roving bridge we’ve seen since the Macc, but still not a patch on those beauties.

They kept moving all the best bits today. A great canal for cats it certainly is, that’s if they stop the outside at the right time! My complaints about them moving the serious trees meant that I was allowed onto the roof with my harness on. But this was only torture as they moved men who had bags of fish, so I went back inside. Then eventually I was allowed out once they’d finished. Not as good as some bits had looked today, but there was a great fence that I could balance along all the way to the top of the bridge. This gave me a good vantage point for finding friends. 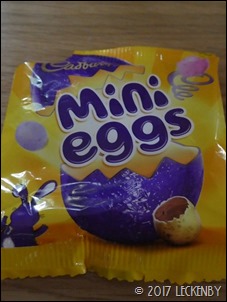