A few boats were moving this morning despite the rain, one came past shortly before we pushed off, but luckily winded in the marina entrance so we wouldn’t be following them up the locks. We put our only just dry coats on and pushed off, knowing that we’d be getting wet today. The drizzle was dampening, nothing like yesterdays downpour, but it didn’t stop raining virtually all day! 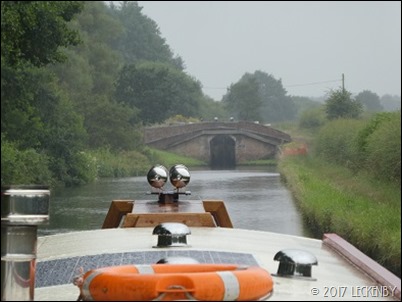 With all five locks to the summit in our favour and a couple of boats coming down it felt like autumn, no queues anywhere. The first lock was frothy as always, then the stretch alongside the noisy M6. A couple of boats were moored between locks a bit higher up both had brollies over their hatches, a suitable day to change the oil. 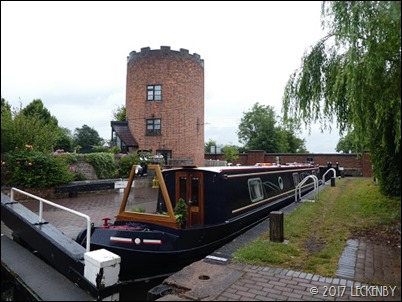 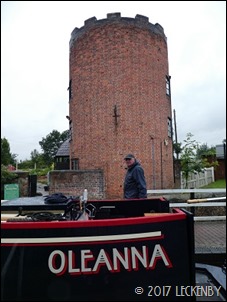 At Gailey we stopped for a photo opportunity as this is the first time Oleanna has passed the round tower, it is a must photo. We then pulled into the water point to give our parched tank a refill. The other day a couple were refilling their tank and they were taking the last bit very carefully, stopping the tap and letting air out, then starting it again so that the stainless steel tank didn’t boom when it was full. They had been told by their boat builder not to let it bang as this would loosen connections from the tank. We’d not heard this before, maybe their tank doesn’t have an overflow like ours. I like the boom as it means you can be doing other things, as soon as you hear it there is a second or two before the overflow comes into action. Lillian did little burps, if you wanted to fill her right to the top standing on the starboard side gunnel would release more air. 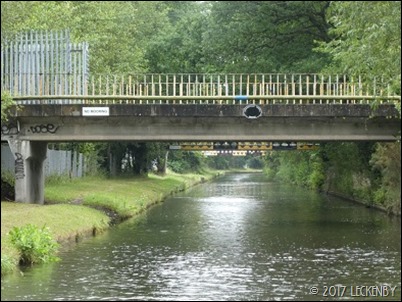 It was still raining, we were wet so on we went. Shortly after the visitor moorings above the lock is a chemical works. Here there are signs telling you No Stopping or Mooring for 200m ‘even if an alarm sounds’! If the alarm sounded I think we’d put our foot down to get out of the area as quickly as possible, not moor up for the day. Every bridge you pass under reminds you No Mooring. On the off side there are some serious ground works going on, a development of industrial units is being built. 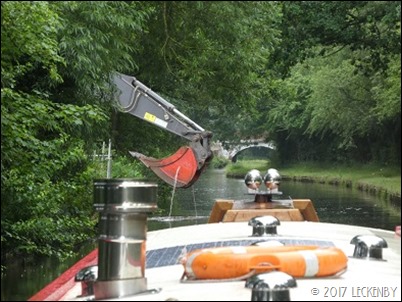 As we progressed along the danger zone Mick started to stare ahead……. ‘Uh Oh!’ Coming through the trees on the off side like a dinosaur, the toothed bucket of a JCB dipped into the canal scooping up water and returning out of view. Was someone watching for on coming boats? Were we about to be dragged by the bucket into the development? Luckily there was a group of chaps working hard watching what the digger was doing pouring the water into a large drain of some sort. We passed in one piece, but wondered if C&RT knew a great big digger was helping itself to their water let alone what damage those teeth could do to the canal. 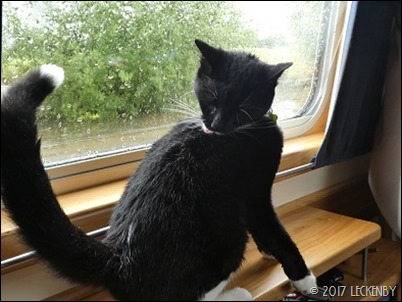 Spotting a length of armco we decided to pull in for some lunch just as the rain got very heavy. Our coats were hung in the shower to drip away whilst we had a bowl of soup to warm us up. The rain carried on being quite heavy, so the inclination to put wet coats and shoes back on wasn’t strong. Instead Mick watched todays stage of the Tour de France live whilst Tilly was allowed outside. No stopping her, she went straight through the hedge and disappeared for a couple of hours before returning looking like she’d been for a swim. 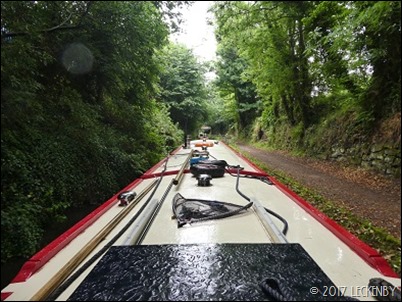 The rain seemed to be easing so we decided to push off, we hadn’t reached our destination for the day and with the reduced number of boats moving today we’d be able to push on and get through the narrows before Autherley Junction without too much bother. For about a third of a mile the canal narrows through a rock cutting only wide enough for one boat, there are passing places should you meet someone coming the other way. But today, as on every occasion we’ve been this way we were alone, on a sunny July day though I suspect it would have been different. 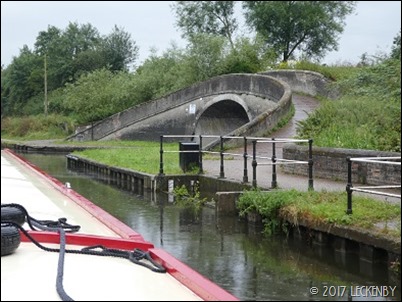 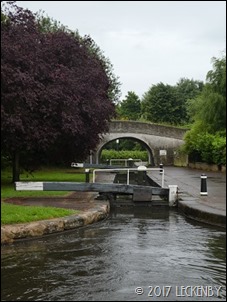 A short distance and we had reached Autherley Junction where we turned right onto the Shropshire Union canal. We’ve never turned from this direction before, we’ve always been heading north. The turn was tight being more than 90 degrees and took a bit of doing. Once turned under the bridge there is a stop lock which needed resetting, but as it’s not even a foot deep this didn’t take long. We were now heading north again. We’ve not been on the Shroppie since late 2014 and then we didn’t head far before turning round. North of High Offley we haven’t cruised since our shareboat days, so we are looking forward to it. Apparently it is a great canal for me too! Lots of countryside to explore, just hope they stop moving the outside so that I can make the most of it!

Mick carried on valiantly in the rain to get us to somewhere that we could moor for the night. The Shroppie has a shelf along much of it’s length which means that where you want to moor may not be possible as you can’t get into the side. Mick tried one place but the shelf kept us out by at least 3ft, but managed to pull in behind a long line of boats on a 48hr mooring. Showers all round and a warming curry, we even put the heating.