A lie in was deserved today, well not really a lie in but more a normal morning.

We’d originally thought it would be good to reach Great Haywood this evening, but with the cupboards looking a little bare we needed to go shopping. So we decided that we’d spend Sunday night at Tixal Wide instead. 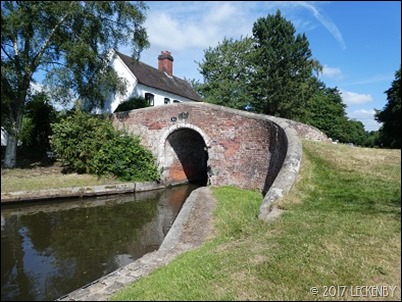 Not far to our one and only lock of the day, Wood End Lock. The narrow bridges along this stretch are pretty and the one here does not disappoint with it’s curving wall sweeping down onto the towpath. Even though we’d only just passed a boat coming away from the lock, it was set against us and ready for a cruiser to come down. The chap talked his novice companion through what she needed to do and I assisted. Once the levels had equalised we pushed on the cranked lock beams. There is limited space before the bridge so they are bent giving a greater advantage to the pusher than short beans would, they are still a bit hard to push but that’s mostly because you feel like you are pushing in the wrong direction. 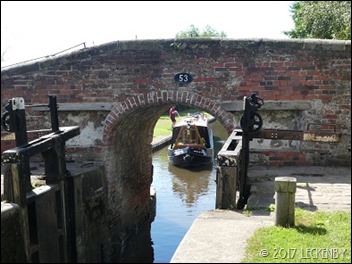 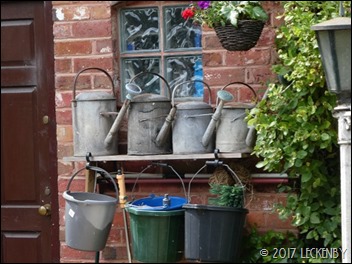 We pootled our way along towards Armitage. One garden has the best kept shed we’ve ever seen, last year we got a peek inside as we passed and it is as ordered as it’s watering can collection is outside. The cooling towers of Rugeley appeared in view, two red, the other two standard buff coloured. Cruising past the large factory we wondered what the noises were coming from deep inside. Could they be testing out their products just like Ikea do with chairs and drawers, repeating the same action time and time again? Past the factory is a large yard, on a previous journey the yard was filled with toilets, today the sign wasn’t quite so funny being surrounded by pallets. 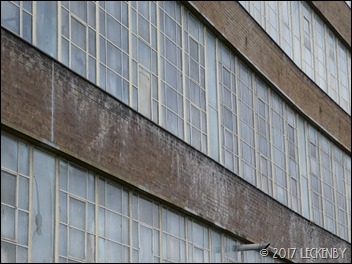 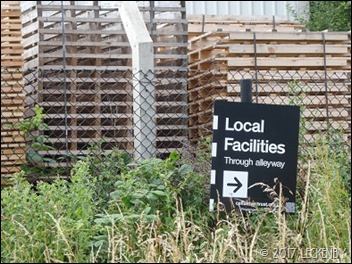 Next came Armitage Tunnel. Originally cut through Kauper Sandstone it was opened out in the 1970’s having it’s roof removed. 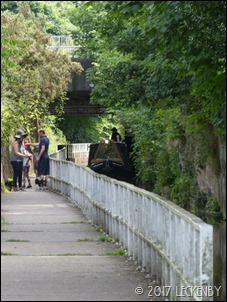 However it still feels very much like a short tunnel as the A513 runs over the top keeping it dark. The cut is narrow here and it isn’t possible for two boats to pass, so I walked ahead with a walkie talkie. A lady was coming towards me obviously from a boat, she phoned them to tell them to continue through. Mick pulled Oleanna into the side and waited for them and a second boat to go through before he could pull out again. 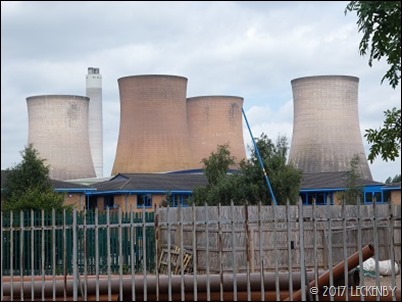 A long line of boats greeted us at Rugeley, we found space to pull in had some lunch and then went to stock up the fridge and cupboards. Tesco let me down on a couple of things, so I crossed over the bridge to Morrisons. It’s the first time I’ve been in this store and most probably the last as they had even less choice. Luckily though the green grocer across the way had lemons and not in a big bag, I only wanted one not half a dozen! 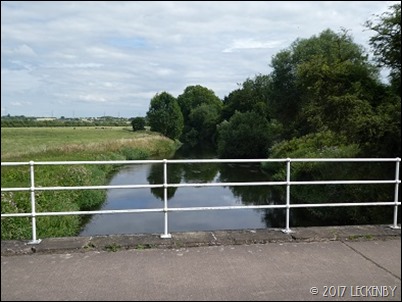 Along the moorings here were most of the boats we’ve been seeing daily for the last week. It is getting so that I can’t remember who is from which boat. Most people were only stopping to stock up and soon moved off, as did we. We bounced across the River Trent aqueduct, something was under the water but never surfaced. The railway comes quite close for a while, but then drifts off near Taft Bridge where there was space for us along with another boat left. This was very soon filled up. Mick took a walk up to see if he could see what the price of diesel was at the boat moored by the bridge. It is normally one of the cheapest places to fill up, but there was no price visible. They only take cash and we hadn’t come prepared. Our tank is still over half full so we should last till we reach Wheaton Aston which will be even cheaper, it usually is.

A roast chicken is sitting in the oven with some little potatoes roasting in their skins, it may have been warm recently, but I’ve been missing a nice roast.