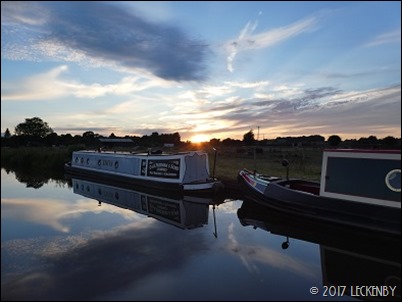 A couple of boats came past before 7.30 this morning, the first nice and sedate, the second was obviously on a mission, it even stirred Mick from his sleep. Knowing that we would be joining a queue for Colwich Lock we didn’t rush to push off. Instead we decided that we should eat up some mushrooms, these were served with toast, turkey sausages and a poached egg, very nice it was too. 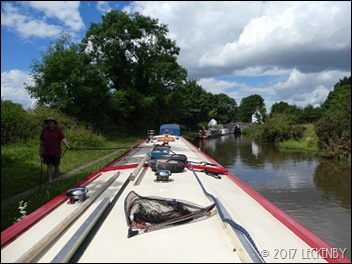 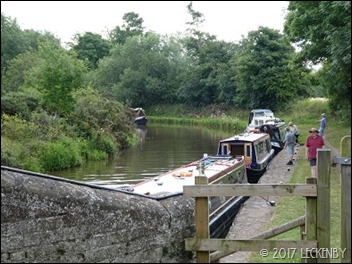 Boats kept coming past us, no-one stopping at Dexter though. It’s a couple of years since we stopped for diesel here and then there was a sign on it’s roof with the price. Today there was no sign, so either they don’t do diesel anymore, or they weren’t open today. So we pushed off and on arriving below the lock joined the queue. A cruiser was moored at the end of the lock landing so the queue had to work it’s way around it. Forth in line with more boats arriving. There was no queue above so once a Stone hire boat came down the lock was reset for each boat in turn. 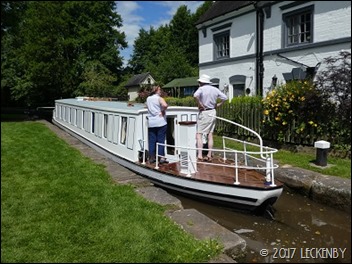 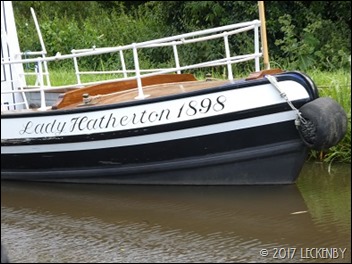 This morning we had been passed by a rather elegant looking boat and here it was in the lock. It’s stern being so pointed and the deck boards having so much varnish, it reminded me of a Thames Launch. Later on in the day we passed it moored up. Lady Hatherton 1898 was built as an inspection launch for the owners of the Staffordshire and Worcestershire canal. It was used by the company’s directors as a horse drawn boat until the 1930’s. Originally built from timber she has been almost rebuilt, her hull now made from steel as the wood was rotting. The interior has had a couple of modern modifications in recent times, but is predominantly still as it was originally. An interesting looking boat. 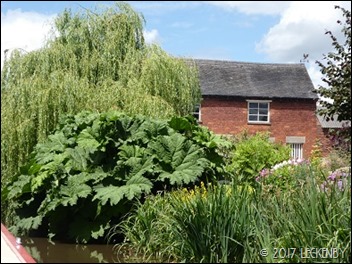 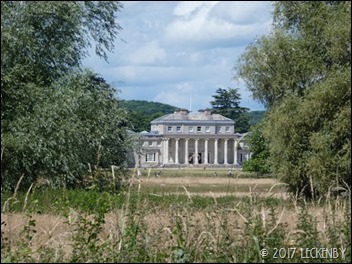 Following the Trent and Mersey up to Great Haywood we passed giant plants that made the cottages look Lilliputian. Then the familiar sight of Shugborough Hall came into view. We could have pulled up here, but the towpath is very busy and we had enjoyed mooring here a couple of years ago. So we joined the now reduced queue at Haywood Lock. A young chap was helping out with a windlass in hand. He chatted away and pull and pushed gates. A pile of possessions sat under the bridge below the lock, which I suspect is where he sleeps at the moment. He didn’t ask for anything, just helped and chatted with boats and gongoozlers. 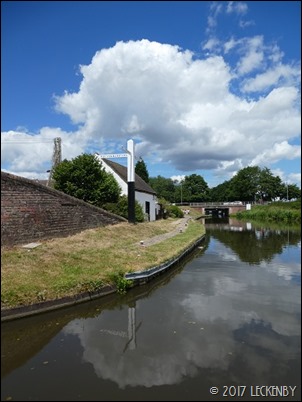 We were now at the junction where back in February Alison and Laura from NB Large Marge had helped us move Lillian and their friends from NB Autumn Wine gave us a lift to Stafford Hospital when I’d broken my ankle. I stood at the bow to check for any on coming boats and Mick swung Oleanna round to the left and onto the Staffordshire and Worcestershire Canal. Passing several boats moored in the shade of the trees we carried on hoping to find space at Tixall Wide for the rest of the day. But our luck wasn’t in. 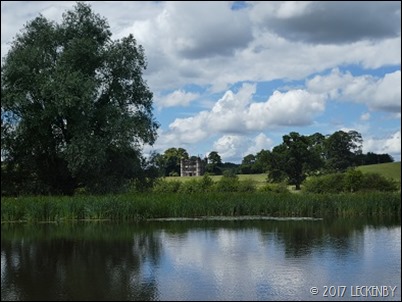 At the far end there were a few boats that could have nudged up to make space for a couple more boats. We tried one gap, which we knew would be too short. If it had been us, we would most probably have already moved up, feeling that we were in the middle of a couple of spaces, this happens when boats move on from around you. But if we hadn’t got round to moving we would certainly have popped a head out to see if we could make more room when someone tried. Not one person showed their face, most avoided eye contact. After a couple of comments from Mick we decided to give up trying, admittedly neither of us had asked if they would be willing to move up.

Gradually we continued on towards the next lock. With no view as such there was plenty of space, but depth was an issue, but eventually we got in. Here there was a good wide towpath where we’d be able to sit out, but for some reason it was covered in pooh. I warned Mick as he stepped off, his usual reaction is  ‘So!’, but he looked around and quickly agreed that there was a lot! We tied up and had some lunch, having to listen to Tilly shouting and rattling the bolts on the back door! This always gets to them. Carefully we pushed back off and moved a short distance along where we could get into the side without fear of standing in something. The doors were opened and the rattling of the bolts stopped.

The port side windows are now wonderfully clean and I have had a major go at the limescale that was building up on the shower doors. White vinegar diluted with water sprayed on, then cleaned off with newspaper has done the trick. So they are shiny once again, well until the next shower!