Time to move on, some water and disposal of rubbish was needed, so we decided to start to move back across London before the next really wet day. The wind was meant to have died down, but it was still really quite strong, just the huge gusts we’d experienced yesterday had gone. So just before 10am we pushed off from our mooring, this took a few attempts as the wind was reluctant to let us go and I just couldn’t manage to push the bow out past the widebeam ahead of us. But we got there in the end and because the navigation was so wide we managed to wind straight away, Mick avoiding using the bow thruster because of all the weed. 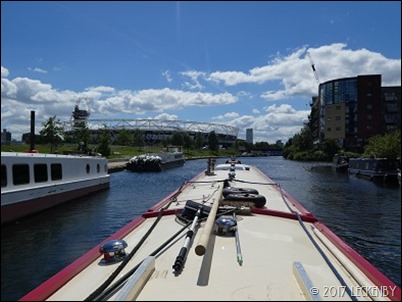 We’d heard that the new water point by Here East had good pressure so pulled in behind a boat that was filling. We’d shared Cosgrove Lock with NB Four Seasons and played a bit of leapfrog with them on our way into London. They had come down to catch up with friends and to celebrate Mrs Four Seasons’ 70th birthday. A good time was being had and they liked Hackney Marshes so much that they were going to stay the full fortnight before heading down to Limehouse and going up the Thames next week. They reversed from the water point with the aim of returning to the space they’d left, but rowers, other boats and the wind didn’t help. 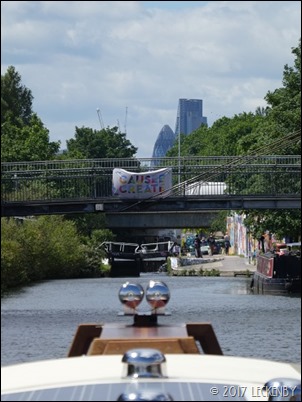 Once on the water point and a load of washing nearly finished I hopped in the shower and when I was clean the dish washer went on. There are better pressured taps on the system, but at least this was an improvement to the one by Victoria Park. Once full and everything clean we pushed on, waved at the kids playing at Josh’s school and then turned back onto the Hertford Union. Straight ahead we could see the Gherkin building, so Mick set course and lined the mushroom vents up. With only ground paddles on the locks I thought it would take us sometime to work our way through the three locks, but the force of water coming through them made up for it and we made good progress along Ducketts turning right at the end where two volunteers were glad of something to do. 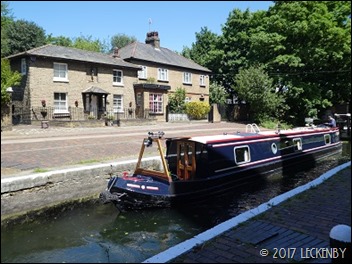 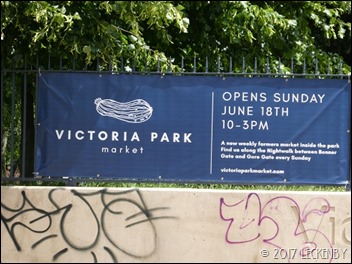 Rubbish disposed off we were off again. Our musical neighbours had moved and another widebeam had taken their place, but Brian and his dead batteries was still moored on the end of Victoria Park. So far we’d passed several Oleanna sized gaps, we hoped our luck would be in further along as we hoped to find somewhere around Kings Cross or before Paddington. If there were gaps here would that mean that there would be more ahead, or would it be that everyone was at the other end of the Regents Canal and we’d end up finding the first space in Alperton! 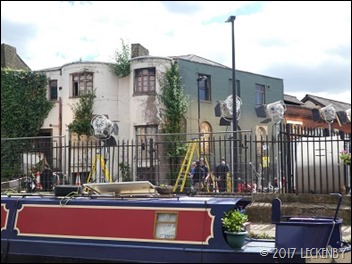 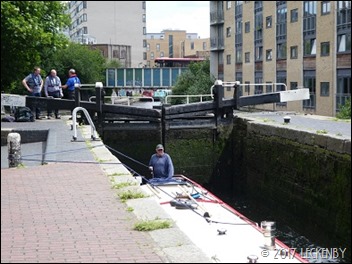 At Aston’s Lock we were surprised to see a Lock Keeper, he was with two other chaps who had life jackets on. They were swinging the gates back and forth, should we go in or was there a problem? After a while they waved us in and I hopped off to help wind the paddles. We were ready to fill the lock, but they were holding a bottom gate open, the chap signalled to open up the paddle and kept his weight against the beam for as long as he could. There had been something stuck behind the gate and flushing water through freed it. It turned out the chaps were down from Stanley Ferry where they make lock gates. They were accessing what needed replacing. The leeks on the top gates apparently weren’t a worry as they are metal, but he took photos of them anyway. The next lock up however he said was a bit of a bodge job, the gates had been made too short so had  extra wood added to them to make them meet. Sounds like they might be going to be replaced. 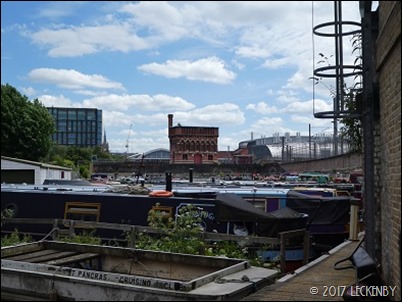 At St Pancras Lock the bottom towpath side gate nearly did for me. It is so heavy to get out of it’s recess, bumping it and leaning with all my great weight didn’t seem like it was going to work. I was so very nearly going to ask Mick to climb the ladder to help when it finally relented and moved just a bit. Not one to give up there was now a centimetre of hope, which became two, then three, then ten until finally I got the b**tard closed. Tomorrow I may have difficulty moving. 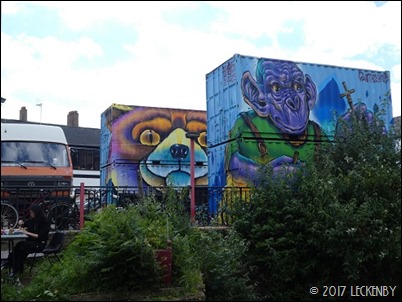 Approaching the bottom lock at Camden I could see a group of chaps drinking sitting on the lock beams. A bit of an intimidating sight but one where just a ‘Hello’ would make it better. The lock needed emptying so I set about doing that as the chaps chatted and drank at the top end of the lock. There was a lot of coming and going of people and the air hung heavy with a certain aroma. Once Oleanna was in the lock, roped up and the first paddle lifted I headed over the gates to open the other one. Reaction times were a bit slow from the chaps at my ‘excuse me’ but they moved over asking if they could help with the gate when the lock was ready. Most certainly they could and as they boasted “We’re from Kentish Town!” I left them to close up after us. By the time we were rising in the next lock we were joined by a volunteer who phoned up to the top lock to say we were on our way up and to hold the lock for us. 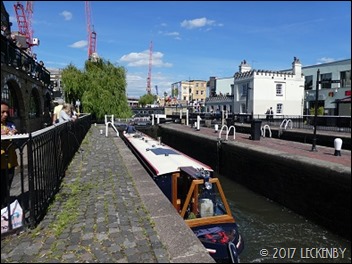 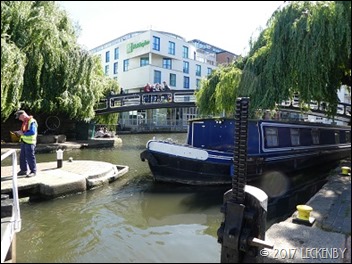 Camden Top Lock has two chambers, but currently only one is in working order. As Oleanna was rising a fat widebeam came cruising right up to the top gates, totally blocking our way out. I tried signalling to him that with him there nobody would be going anywhere, but he ignored me and preferred to talk to the volunteer. After being told that the second chamber was not in use he was then asked to pull back so that we could exit the lock. “Oh are they coming out?” Yes! The pointy end of our boat was facing him, a bit of a clue and both boats certainly wouldn’t have fitted in the lock. So he reversed back a bit, still not enough space, then a bit more, then he was in the way of the trip boats so had to go even further! 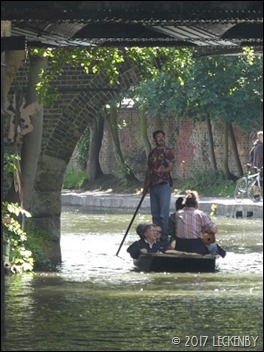 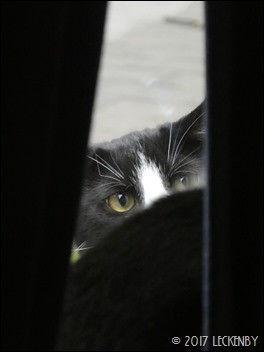 The volunteer had asked where we were heading to today and then imparted local knowledge on mooring. The Camden Visitor Moorings weren’t far, but we’d be lucky to get in there, then Paddington and Little Venice. We were at this time of day expecting to have to breast up, but to our surprise as we came under Gloucester Ave there was a space on the visitor moorings, just our size. We quickly grabbed it before the next boat could arrive. Very lucky indeed. 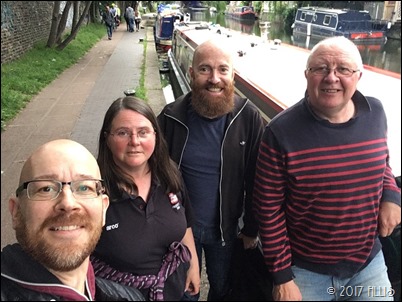 This evening we were joined by a college friend of mine Mike and his partner Chris for a guided tour. They visited us to do the Stoke Bruerne flight on Lillian a couple of years ago. Both now bearded, Chris must have been growing his for the last two years, It was very lovely seeing them again. Lots to catch up on, a full tour and then we walked back into Camden for a Fish and Chips tea. Being from Scarborough it was nice to be able to have haddock again, but I do miss it being cooked in dripping. Having said that it was very nice, although the chips could have been better. Chris and Tilly got on very well, so hopefully if we manage to time a flight of locks well they will come and join us now that she have given her seal of approval.