On Wednesday evening after Brian had gone to find his crayons to make a sign to pop in his window, a boat pulled in alongside us. This we don’t mind, we have been in London for over a week now and been able to look out of both sides of the boat for all that time. But our plan was to move off in the morning to find a mooring on the Lee, so Mick popped out and the chap decided to pull alongside Brian instead. Within five minutes though a widebeam reversed up and pulled in along side us. They were on the hunt for a working pooh sucky machine and the nearest one was out of order, so they hoped that in the morning they would be moving on to empty their tank. Swapping boats round was an option, but her partner would be around in the morning to help should we be the first to move.

As we went to bed we could hear what sounded like next doors water pump going off every five seconds. Luckily it was so regular that it became easy to ignore, I could only assume that this was why they could ignore it too. Over night my insides decided to disagree with something  and the last thing I was going to be capable of was working Oleanna through locks. So instead we stayed put, Mick pottering around the boat, Tilly wondering why other cats were allowed to walk over her boat and I spent much of the day in bed hoping for some improvement. 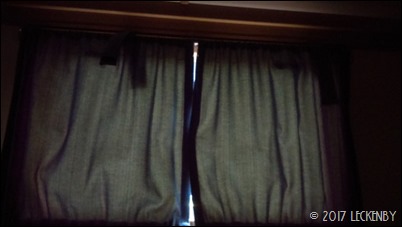 Half asleep in the half darkened room the cycling water pump was replaced with piano music. It seemed a bit distant, but could only be coming from next door. Asking Mick about things like this can be a bit pointless as his hearing omits certain frequencies. I’d started to wonder whether my mind was just trying to keep me distracted with music, but eventually Mick could also hear it. Mr Widebeam must play the piano or keyboards as it stopped just before he left the boat in the afternoon.

Last night the water pump next door seemed to be constantly going or someone somewhere was running a generator in the early hours. Then at about 2 am there was a very loud telephone call going on which was followed by loud bicycles and some music turned up loud for full appreciation! This was then followed before 5am by the local dawn chorus from the paraquettes in the park. I was glad I’d spent much of yesterday asleep! 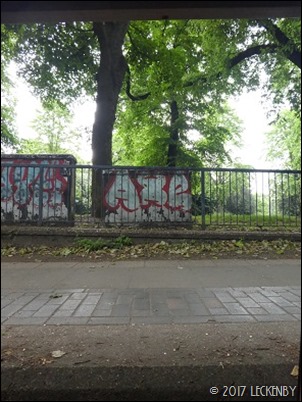 Today we have also stayed put and sadly had to postpone a meal this evening with my friends Nick and Kerry at my brothers as I’m still not feeling up to it. Hopefully we’ll get to see them later next week when I can enjoy a pint again. As next doors cats stayed inside to listen to the piano Tilly got to explore the clump on trees along the towpath again. Both the Brompton bikes have been fettled, oiled chains and tyres pumped. When Tilly decided to return to the boat she dashed out in front of a bike, but luckily for her it was just Mick who slowed down and let her dash for the stern. 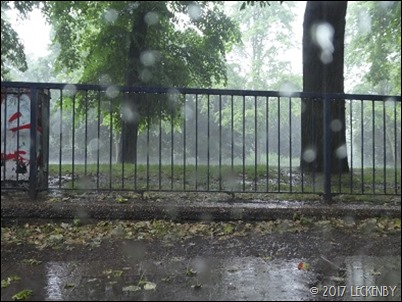 Shortly after next door finished tickling the ivories this afternoon a loud deep base came wafting from the park. A large stage has been erected in part of the park for music festivals through the summer. The sound check booming was soon over shadowed by vast rumblings of thunder followed by torrential rain. Here’s hoping that tonight is quieter and that we’ll be able to move on before the festival gets going tomorrow. 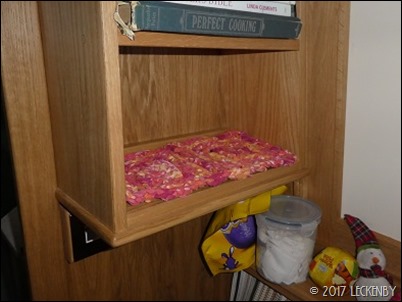