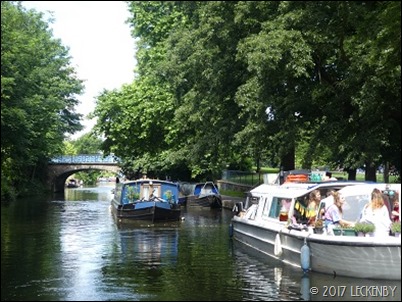 With the festival about to get going in the park we decide to make a move and see if we could get moored somewhere near Hackney Marshes. First job was to see if anyone was about next door and ask them to let us out. I’m sure we’d have been able to have pushed them out and then pulled them back in, but Mr Widebeam was around and started up their engine. When they had moored up the other day they were short of a stern rope, so Mick had lent them one of our spares, we asked if he’d like to buy it off us for £10 but he said he was fine. Don’t think I’d be happy with just a bow and centre line, but each to their own. 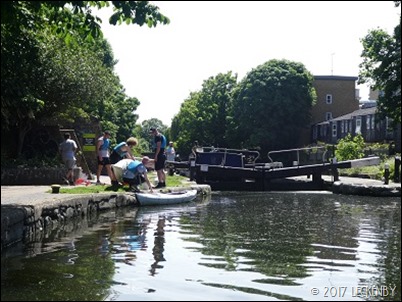 Once free we headed straight for the water point, a boat was coming up in the lock so we beat them to it. They managed to stay put in the lock and use the other tap that was by the bins to get their tank a quarter full before the volunteer lock keepers had to ask them to move so other boats could use the lock. Old Ford Lock can be a busy one as it sits just by the junction with the Hertford Union Canal, a short cut across the bottom of Victoria Park to the Lee Navigation. If you continue straight on you end up at Limehouse and then the Thames. Because there is a water point and bins it is a popular place to fill your tank after being moored for two weeks. So volunteers help to keep the moving boats on the go, but even they didn’t understand why there were four of them rosterd on for today and then none next week! 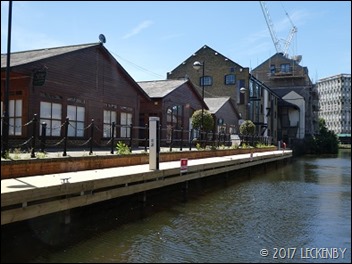 By the time we’d finished filling up an orderly queue had formed both in front and behind us, we’d picked our time perfectly. Down the lock and we turned a sharp left onto the Hertford Union. New off side moorings were nearing completion as was some new housing. A small sign hung from a building suggested a chandlery, but the mooring in front will be a permanent one so access will only be by land and looking for their website suggests they no longer exist. Once through the second bridge we were onto new water for all of us. In December 2014 we’d come down this way, but the three locks on the Hertford Union had closed early for maintenance as a gate had been damaged. We’d moored up short of the second bridge and then reversed back out to take the route via Limehouse onto the Lee. A couple of days ago a gate had been damaged closing the locks again, but the fix was a quick one so there was no need for a large detour this time. 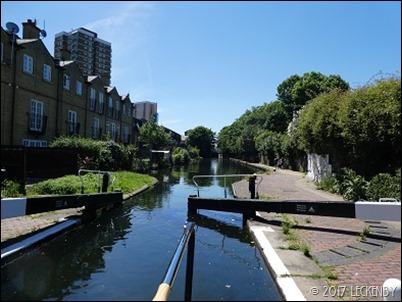 Still not feeling too good I stayed on the boat to take her through the locks, that was until I managed to give the first gate a very big biff! Luckily the gate swung out of the way after the encouragement I’d just given it! Blimey poor gate and Oleanna, maybe I wasn’t capable of being at the helm! No damage done thank goodness, a few drawers open inside Oleanna, but that was all. Mick locked me down and behind we could see another boat approaching. So once in the middle lock we waited to see if they would be continuing down the locks or had pulled in. With camera on full zoom I could make out someone working the lock, so we stayed put and opened the off side gate ready for them to join us. I took over windlass wielding and managed much better at that than I thought I would. 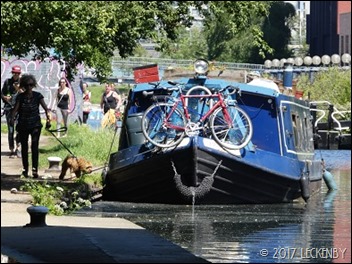 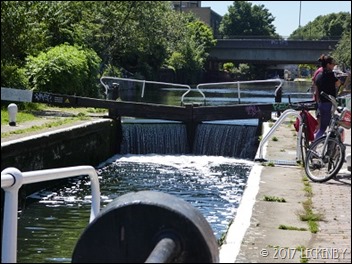 The next lock was being turned in front of us as our bows appeared through the bottom gate, but as it was only about three foot deep it wouldn’t take long for the boats to come up. The amount of water coming over the top gates though meant the level was unlikely to even out, so with two people on a bottom gate we managed to force it open. There was a cruiser and a small fibreglass dinghy, the chap from the dinghy had a reasonable engine, but the cruiser was powered by the smallest outboard ever and instead of using it they decided to bow haul themselves into the lock. The chaps with the cruiser looked like they knew very little, did they even have a windlass? So after an exceptionally long time the two boats headed on towards the next lock, leaving it for us. 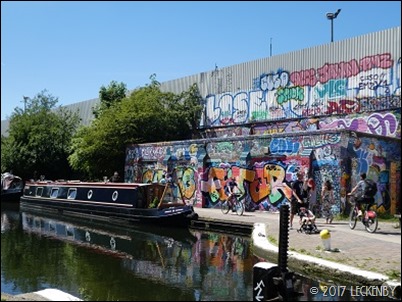 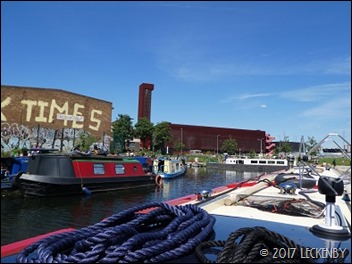 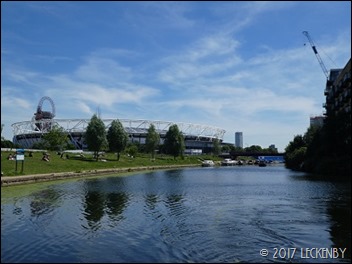 A lot of the walls round here have been given over to graffiti, some of which is good, but have to say not a patch on Leicester’s. At the junction the world opened out, wider water and the Olympic Park stretching out ahead of us. To the left the Copper Box, the right the stadium. We were back on old waters now. We turned left passing the mooring places we’d used before. The bridge from Josh’s school to their play fields now is no mooring and beyond there up to the next bridge is permanent mooring which was being prepared two years ago. New restaurants and other businesses have taken over parts of what was the media centre for the Olympics. A new life to the area.

Now we were on the hunt for a mooring. A few spaces showed themselves, but the question is, Can you get into the bank? We tried one place behind NB Four Seasons, but they were on long lines, we still don’t have a gang plank so this was a no no for us. After Homerton Road Bridge a couple of bollards were free, but very close to the bridge. We pulled in and Mick headed on by foot to check out other spaces. Because the area is popular it was quite easy to recognise spaces that were far too shallow as the weeds were high, other gaps had lower weeds which gave us hope. We pulled into one and I hopped off the bow, but the stern wouldn’t come in. A couple of large boulders under the water were stopping us from getting into the side properly. We nudged back so that only one was in the way and decided to call it a day with the bow near enough to jump off and the stern sticking out! Certainly not a text book mooring, elsewhere on the system we’d have carried on to find somewhere better, but hey we’d had enough. 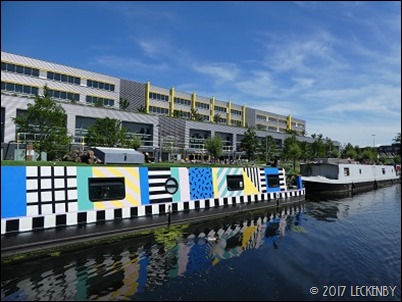 Jac and Andrew turned up so that Jac could have a guided tour of Oleanna as she had missed out the other day. She’d been told about the corner cupboard and was suitably impressed. After the tour we climbed into their car and headed over to their house to help them eat up the mountain of vegetables they’d bought for the night before that had been cancelled. I was still on reduced rations and water only, but the food went down well. A lovely evening sitting out in their garden listening to the festival across in the park, before it rained.

We had a slow walk back to the boat. The temperature had dropped which was a relief and there was a breeze. London seemed to be normal around us, fast and noisy. An Ambulance whizzed past, followed by an unmarked police car, helicopters could be heard over head, a few more sirens. We didn’t think much of it until we checked social media.