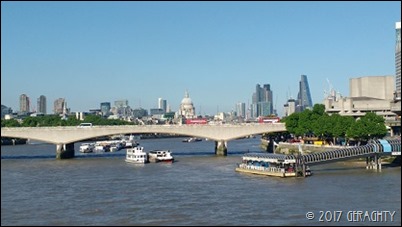 Mick’s mum Ruth loved her music, especially choral music and in her time she sang with the Royal Choral Society. One of her favourite concert halls was the Royal Festival Hall where she introduced her children to her love of music. About ten years ago Ruth paid for a seat to be named for her and recently the family was approached to see if they wanted to renew it. When we knew we’d be heading to London for a few days Mick decided to see if there was a concert whilst we were in town where he’d be able to sit in his Mum’s seat. So last night we were joined by Kath and Christine at a performance by the Philharmonia Orchestra of Brahms Piano Concerto No 1 in D minor, Op 15 and Beethoven’s Symphony No 7 in A, Op92. 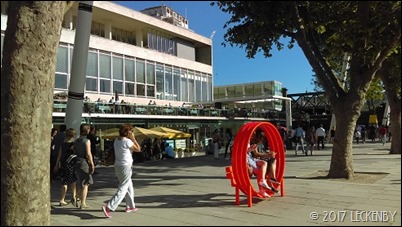 We all met at Wagamamas below the Festival Hall and had very nice summery fish dishes with a glass of wine before working our way into the Hall. Following the bombing in Manchester the South Bank have instigated bag searches at each of the venues. We had been sent an email warning us about this. Access into each venue is reduced to one door where security were checking every bag and large bags had to be left with them. We expected there to be long queues so left ourselves plenty of time before the performance, but the staff were very efficient and we were on level five before we knew it looking out over London.

I had last been here with my junior school some 40 years ago. Sitting in the cool concert hall listening to the orchestra was a lovely way to spend the evening. The Beethoven went down better than the Brahms and received a standing ovation. They don’t half like to applaud at these things! They even get a round of applause for just managing to walk onto the stage! I had to resort back to tapping my thigh with my left hand as my missing digit was complaining somewhat. 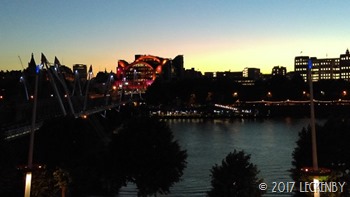 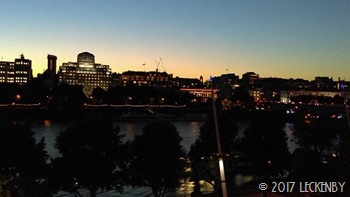 On leaving we had to walk back out onto the balcony to admire the view and sunset over London. All the buildings were lit up and the sun was giving the sky it’s last glow of colour for the day. Stunning, just a shame I hadn’t taken my camera with me, so phone photos have to suffice.

A lovely evening all round apart from one thing….  where was the name on Mick’s seat or should I say, Ruth’s seat? Normally a plaque is put on the back of the seat so the person sitting behind can see who had been so generous. The row in front were almost all named but on the back of THE seat all there was were screws and a small portion of a plaque trapped under a screw, but no name! Not even the end bit of a Y. Has her name been broken off and not yet replaced? Or was it not renewed? 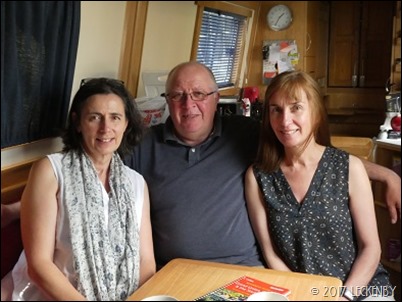 Today we have had the first wave of London visitors, Siobhan and Fionualla. However Siobhan has travelled a lot further to be able to visit us, as she actually resides in Newcastle, Australia. She is over in England visiting family and brought Fionualla  her sister to see us this morning. Mick and Siobhan are very good friends and grew up together in Ealing. It may have been about ten years since we were last together in Newcastle, so there was lots to catch up on over a cuppa and of course a full guided tour of Oleanna. It is now our turn to visit Newcastle. 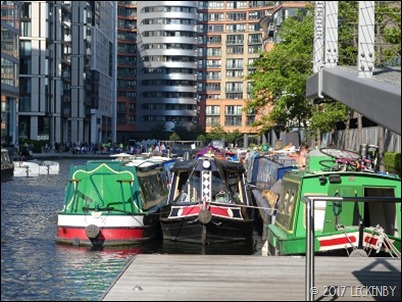 Once midday arrived, so did the stream of boats hoping to moor up in the basin. The first boat had tried yesterday and called out to see if they could pull alongside us. Mick popped out to chat with them, we think that where we are is restricted to single mooring so he pointed them to where there was a space to breast up. A few more boats have turned up and then had to battle with the wind that there seems to be today, but all spaces are now taken. A couple have tried to pull up on the opposite side to us, even managing to tie up, but they have been moved on by the security guards. They really should remove the mooring rings if they don’t want people tying up or better still allow people to moor there. Going for a walk this afternoon I noticed that boats are now three abreast just up from us. We certainly timed our arrival on Tuesday very well. 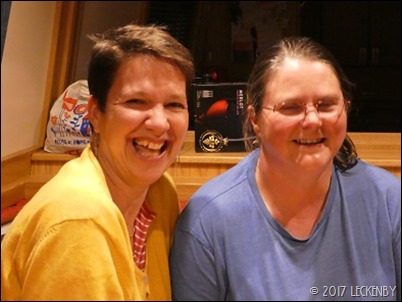 This evening we’ve had the company of an old friend of mine Sara Taylor. Her husband was a visiting lecturer at my college and I was taken under their wing during my final year. We became great friends and have managed to keep in touch even though they moved to the States 24 or so years ago. Sadly David passed away a few years ago and Sara and I haven’t managed to been in the same place together since I saw the Millennium in with them in Connecticut. After seventeen years there was a lot to catch up on over dinner and the odd glass of bucks fizz. Plenty of laughter and a lovely evening to round off a day full of visitors.