A drizzly kind of day, grey, quite disappointing compared to the last couple, but at least the wind had died down. 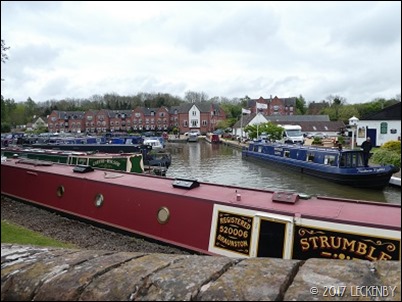 Mick walked up to the village for our Saturday paper whilst I made my way along the towpath on my crutches. If I know I’m going to walk a distance at the moment I use them, otherwise I go solo hobbling along. We met at Butchers Bridge, the walk over the ornate bridge at the marina entrance was considerably easier than it had been the last time we were here, followed by the convoluted way over dry dock bridges to get to Tradline. 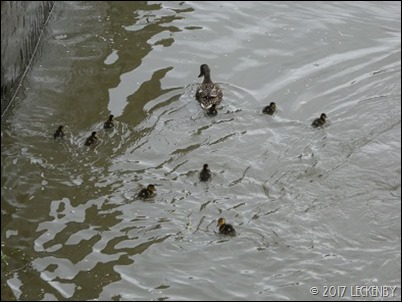 At the moment you can buy a full set of 14mm ropes from them for £55, this includes bow, stern, centre line and a soft shackle. Jan yesterday had shown us their soft shackle which we’d not seen before. Tyler Wilson shells have a small loop on the roof to attach a centre line to. We tend to have two lines attached here and Mick had cobbled a means of attaching our ropes for the time being. The soft shackle will make this much easier. They are clever things tightening under weight but incredibly easy to undo when at ease.

Looking at the 14mm rope it still seemed a bit thin compared to our old ropes so we decided to go thicker still to 16mm. Then a choice of black, blue or hemp. We opted for blue which the lady would have to make up for us. So instead of watching we walked back to Wharf House Chandlers so I could check on how long it would take to order some touch up paint and get a new tin of Multiforte, with the hope that I’ll keep the gunnels touched up as we go. Touch up paint would be between 24hours and a week to come in, shame I hadn’t rung last week. 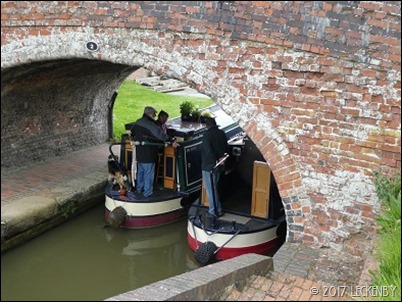 Mick collected the ropes and we were ready to set sail for London. In the pound where we were there is a slight indentation which made us wonder if we’d be able to wind there instead of going down the remaining two locks to the marina entrance only to come back again. But an enquiry on facebook came back with a no, so we didn’t even try. As we were about to pull out a boat was just mooring behind us for lunch, they had been sharing the locks with NB Hakuna Matata, so we swapped places with them and shared the last two of the flight. 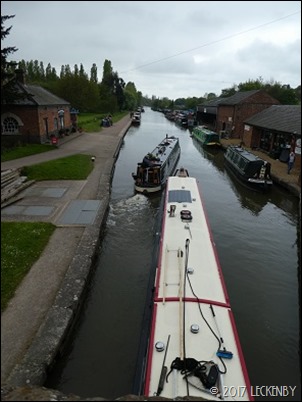 It seemed daft for me to get back on Oleanna, only to hop off again when we’d winded and returned so I stood on the crest of the bridge and watched what started out as a quiet scene. Mick gradually disappeared under Butchers Bridge towards the marina entrance where he wanted to wind. From my view point I could see two hire boats pulling out, one reversing, another boat waited for them to wind before coming through the bridge. Out of sight boats appeared from every direction as Mick reached the marina entrance. One boat sat waiting for boats to go past before pulling out, this blocked Micks way and therefore holding up boats behind, others came from Braunston Turn holding everything up too. Eventually Mick managed to get the nose of Oleanna into the marina and winded, the hire boats followed, one chap had definitely seen bunnies and panicked bumping into a following boat. 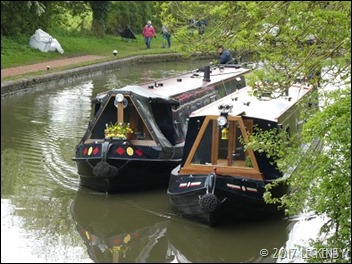 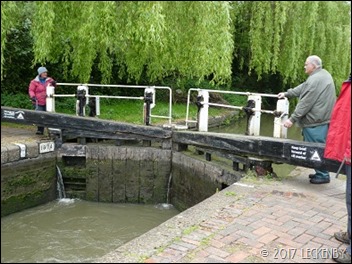 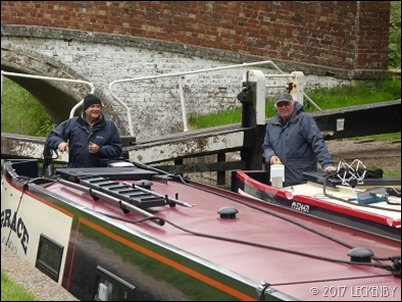 Back at the lock two boats arrived and it would have been churlish not to have opened the gates for them. The first boat in the lock was a single handing lady we’d come across on the River Soar a couple of weeks ago, I suspect we’ll play leap frog with her if we don’t end up sharing locks. Then NB Grace and Oleanna came into view, lock reset and we were on our way back up. Denise and Colin (hope I’ve remembered your names right) had brother Bob with them who was under tuition. We managed to have a very jolly chat as we worked our way up the six locks. They are also heading to London, not sure if our cruising pace will be similar, but if it is the locks will fly by. 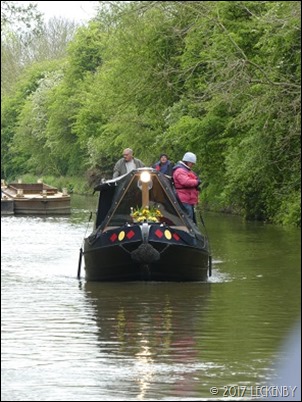 Originally they had thought of stopping before the tunnel, but instead decided to follow us through as we were ‘seasoned boaters’! We met two boats at different times coming the other way. The second one we could see we’d end up meeting at the bend, so Mick slowed down, in the end we managed to stop just with the bend in view as the on coming boat twisted round it. No serious bumps or scrapes today. 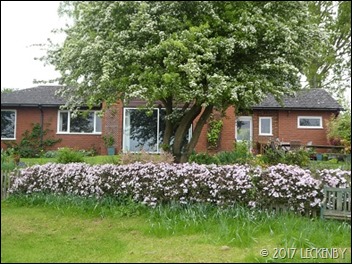 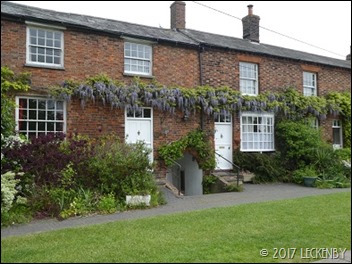 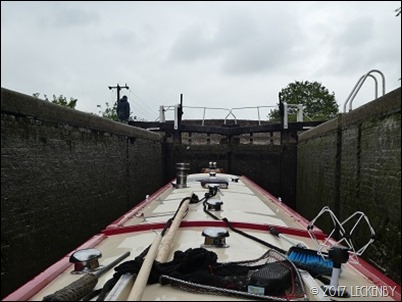 It being about 4pm we decided to carry on and do the Bucky flight before stopping for the day. NB Grace pulled in above the flight and the single handing lady had also stopped, so we ended up sharing the first lock with her partner. Then we were on our own again, I handed the windlass over to Mick and drove the rest of the way down the flight as my ankle was starting to complain. All the locks were in our favour as the sky got greyer and greyer. At Wilton we pushed on a few more miles before pulling in near the Bedazzled boat. Here hopefully we were far enough away from the M1 and railway to have a peaceful night.