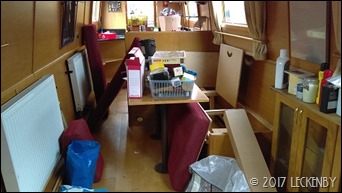 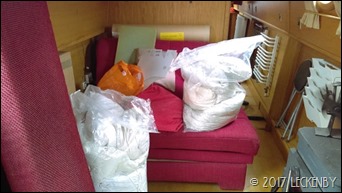 Emptying one small space into a slightly smaller space.

Realising that the corner cupboard held a lot more than you thought.

Being strong and throwing things out that haven’t been used for three years, that you once thought were vital to life.

Feeling good that part of your old boat is empty, then realising that you can’t sit down anywhere in your new one. 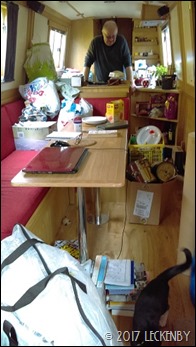 Taking things out of cupboards that were destined for the bin, but somehow had been put away.

Constantly putting Tilly behind the one door she can’t get under just so you can open another. Prison, it’s not a boat it’s a prison!

Leaving the one thing that has a definite place to go till last, knowing it will fit, not knowing if it’s possible to get it in there.

Liberating the second Brompton from the bottom of the wardrobe for the first time since August 2014, less than three years so we can keep it.

Seeing the bottom of rear lockers for the first time.

Guided tours of ‘The new boat’ in the marina.

Hoovering everything in sight and out of it.

Wishing the forecast had been correct so that the stern deck can get a coat of paint.

Getting four text messages at once when you walk through that inch of mobile phone coverage that Crick has.

Listening out for a tap on the boat next door that the cat has heard before you.

Hoping to not have to play Jenga with our possessions. 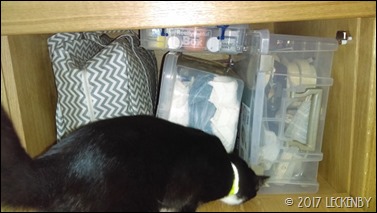 Hoping that the covers you’ve just washed will go back on the dinette.

Finding five toy mice, two pens and six silver balls behind the sofa. They were safe back there!

No ITV 4 for the Tour de Yorkshire and views of home home.

Whilst not moving the outside once and leaving me with this boring view! 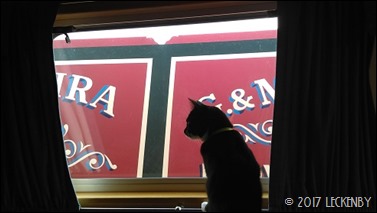