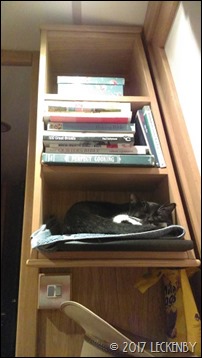 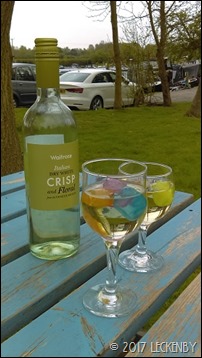 By the end of Friday Lillian was just about cleared of all our possessions. Finding space to sit down on Oleanna in the evening was quite hard as things still needed to be sorted on her. I found somewhere and stayed put in fear that should I leave it it would be filled with far less important stuff than me. The list of jobs instead of getting shorter seemed to be growing, not a good thing. Still with a few things on the list for the day I popped over to help Lizzie on NB Panda fill with water, this ended up with us opening a bottle of white and sitting out enjoying the early evening before it got too cold. Once Mick had finished his chores in the engine bay he came to join us.

Saturday we started to play musical boats. We wanted to take Lillian out to Cracks Hill to touch up her gunnels, she was on the inside with Oleanna on the outside tied to her. So we retied Oleanna to the pontoon at the bow, I held onto the centre line whilst Mick reversed Lillian out into the marina. Once I had pulled Oleanna back in I hopped on the back of Lillian and we were off, hoping no-one else had beaten us to the mooring. With the thought that the port side would be left to dry longer at the end of the day we winded so that I could paint the starboard side first, giving the maximum amount of time to dry before we got back to the marina. 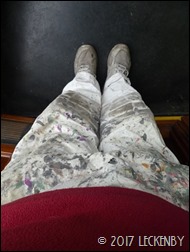 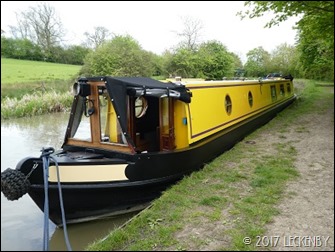 A sand down of the sides with a bit of extra on the scrapes followed by a wash and a coat of multiforte was all she needed. I was very glad I’d done a good job on them back in September. Once the port side was done we winded again and the process was repeated. As Lillian was now empty we had packed ourselves a picnic which we had sitting on the bench seat over looking the hill, it is a lovely spot. 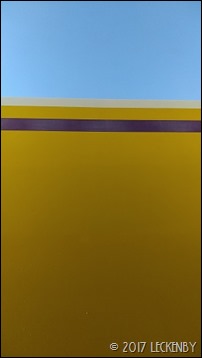 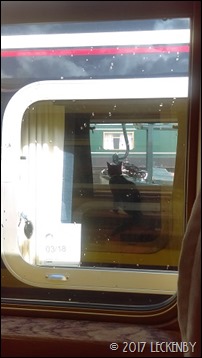 They thought they were being clever. Changing the view from my window would make me think that they’d been busy moving the outside. But it was too quiet for that to have happened. Then it changed again. Yellow to the right, yellow to the left, just what is a cat to think!

On our return we were spotted by Micky and Dave from NB George, once Micky realised that we had Oleanna moored up she was straight round for a nosy. With all the planned painting completed back in the marina and Lillian’s stern out of bounds until it dried we headed to The Red Lion with Lizzie and Gary for steak and chips all round. A well deserved evening off. 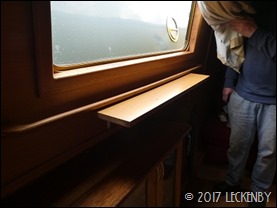 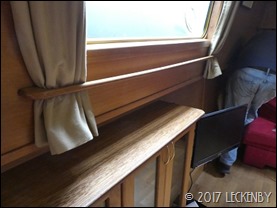 On Sunday the serious cleaning continued. The ceilings and cabin walls were washed down, windows polished and a couple of wood work jobs were ticked off the list. Mick made an impressive job of the oven and fridge and started on the brass. We discovered that the people whose mooring we were occupying had returned early from their cruise on Saturday and had been quite irate at there being a boat in their spot, luckily we were out on Lillian at the time so were oblivious, wonder what they would have thought if there had been Lillian there too?

On Monday the owners of NB Jacaranda came back from a couple of nights away and decided that they would like their mooring back as they had changed their plans and wouldn’t be heading back out. So we quickly stopped what we were doing and once we knew where we could move to we brought each boat out of the mooring in turn and moved onto the next pontoon, the other side of NB Kamili. Yellow back to the right, but a different green boat the other side. 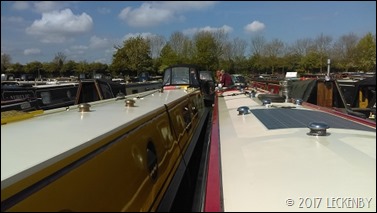 Borrowing Lizzies bench and hose pipe I spent much of the morning giving Lillian’s covers a good scrub to remove the worst of the winters green. A few touch ups on the grab rail and a thorough floor wash whilst Mick washed the roof down and finished off the brass polishing. We were starting to run out of steam by the time we’d finished. Poor Oleanna looked like a bomb had hit her with possessions everywhere. At last we tried my drawing board in the specially made slot at the end of the galley and dinette. The manufacturers had given me the folded dimensions of the board but they had omitted to include the knobs that stick out that hold the parallel motion in place! It was too tall on it’s side for the lid to close Grrrr!!! I was hoping to be able to store folding stools in there too. However with a bit of careful positioning everything would still fit with the drawing board on it’s side. Phew. 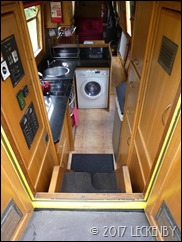 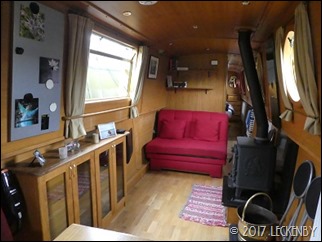 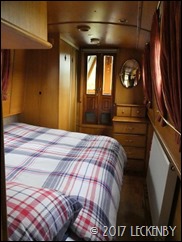 Now that Lillian was clear of all our possessions apart from pictures and she’d been cleaned to within an inch of her life we had to dress her for her publicity photos. Lizzie lent me a few photos in frames and some nicer looking place mats so that the table could be laid. A few books and dvds were popped on some shelves and the bed was made up with our spare duvet. Some spices put in the racks and our kettle and cast iron pot strategically positioned in the galley. We had done it, pooped we certainly were.

Tuesday arrived and there was a chance that some chaps from Finesse might have been turning up to do some snagging on Oleanna, but luckily they plan to come later, which left us both free to be able to chat with the boat inspector from ABNB. As we bought Lillian through ABNB it saved quite a bit of time as they still had a record of her details. Over the years we have replaced halogen bulbs for LEDs, altered the dinette and cupboards and bought a sofa bed. So the details were amended. 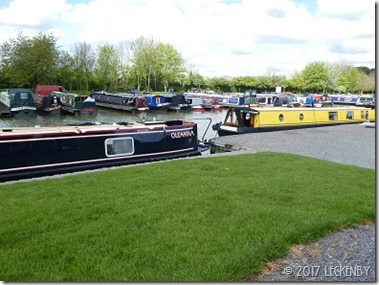 A long exterior shot was required and so was a pump out. But first we had to move Oleanna out of the way, we moored her at the bottom of the grass bank and then returned for Lillian. No Yellow, but grass and people to watch. The pooh sucky machine was hooked up for the last time, plenty of rinses and flushes of the toilet. Once Justin from ABNB had taken photos from the other side of the marina we climbed aboard for our last ever cruise in her. Only a third of a mile, the sun was shining, the wind was minimal. We turned out onto the cut pootled along and turned into the other part of the marina where some ABNB moorings are. Mick reversed her in and she was tied off to NB Kestrel. 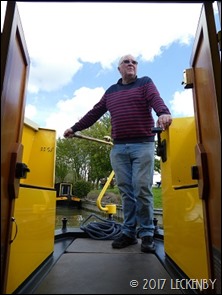 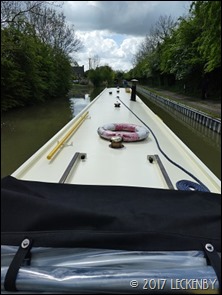 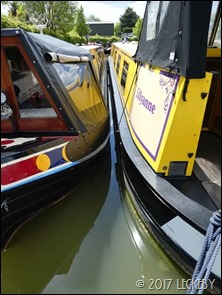 We finished off the paperwork for her sale over lunch and popped it into the office with a set of keys. All that was left to do was to reclaim the dressing. Oleanna needed a good sort out before anymore could come aboard, but we did get our duvet back. 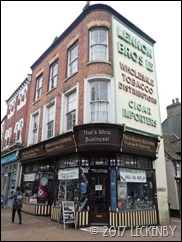 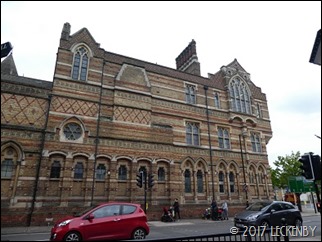 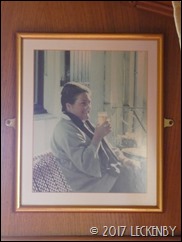 On Wednesday morning we caught the No.96 bus into Rugby from outside the marina. We needed a few bits that Wilko would provide us with, a door mat, clock etc. and whilst we were there we managed a quick look around the centre. Worth a longer visit the next time we are near. Then it was time for us to say our last goodbyes to Lilllian. The last picture to be taken down was one of my mum, Lillian, that has travelled with us for the last three years. Once she was down we locked the stern doors and left NB Lillyanne to find new owners through ABNB. 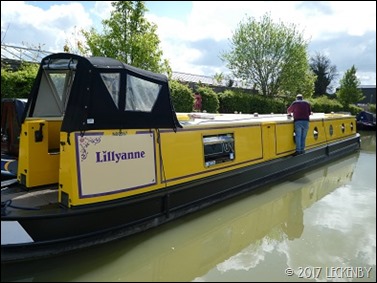 A last supper before we left had been arranged at The Red Lion with Lizzie, Irene and Andy. This time we all managed to try something other than the steak. My Pepper and Mushroom Stroganoff was very tasty and the trout looked good too. With good company, good food and beer it was a fitting way to end a full on week and an emotional day.

2 thoughts on “Musical Boats. 3rd May”