Before heading off towards Cromwell today we thought we’d try the water tap here. Last night hadn’t been as cold as the night before so it was worth a try, but the pipes were all frozen, no joy. We hoped that we’d have more luck at Cromwell otherwise major washing would be put on hold and we’d start to smell! Mick tried calling the marina but there was no answer so he walked round to see if there was ice or water. Not enough ice to stop us from going in, but turning would be a touch hard, so we’ll manage without a top up of diesel. 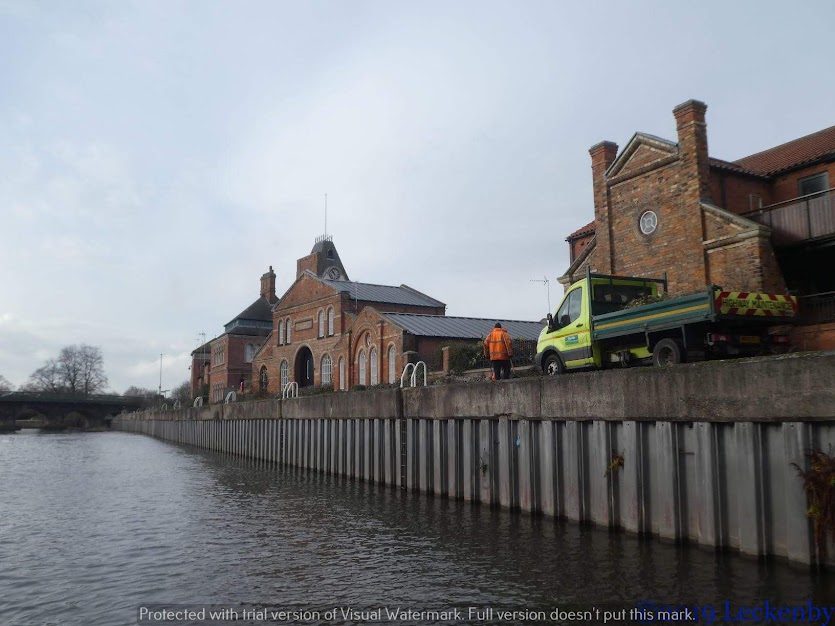 We pushed off and headed up stream a touch before winding. The dam that’s been put in close to the scrap yard narrows the channel somewhat so we wanted to be well clear of it before turning. Then as we came back we could see where they had stored their boat for the night. It was being swung over and into the river by the crane on site, we got past before it was lowered into the water. 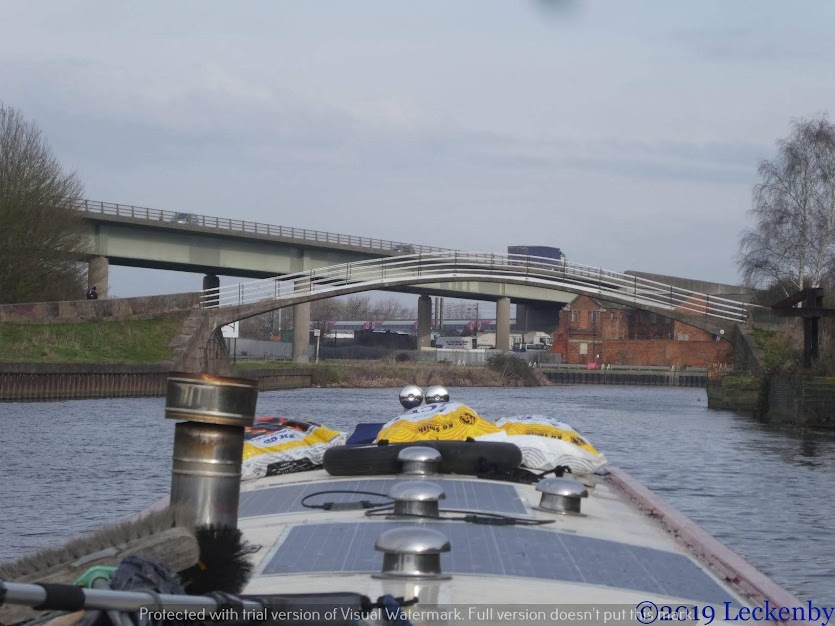 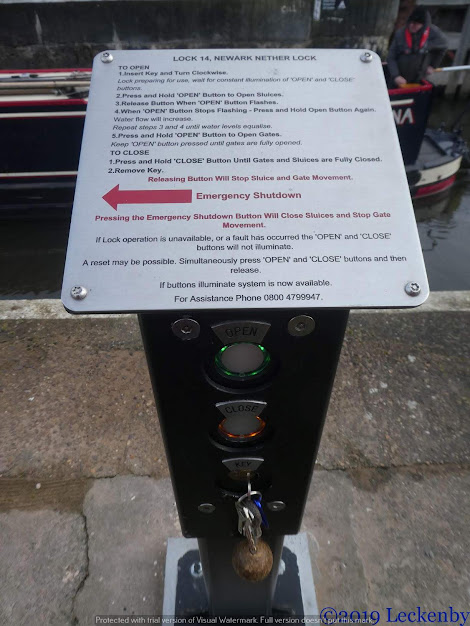 Nether Lock was on boater operation. As I crossed the gates I noticed that the top gate sluices were open, well I wasn’t going to be caught out by that again! But hang on, the panel had changed, only two buttons to press, one to open, one to close. The instructions took a bit of reading as the operation isn’t just simply open and close. When the green light is constant (open) you press and hold it, when it flashes you release it. This gradually opens the sluices at the end you are operating, so you can decide to only open them a bit and take your time to rise.  But today the level was in our favour and the gates just opened on the first push of the button. Opening the bottom gates took a little longer, the panel thought everything was level and tried to open the gates, but then had to wait another couple of minutes before trying again. The new buttons (which might be several years old) are all fine, but when it comes to closing up the lock it takes forever! The gates have to close before the sluices even think about closing, all the time Oleanna trying to tread water by the low moorings to pick me up. 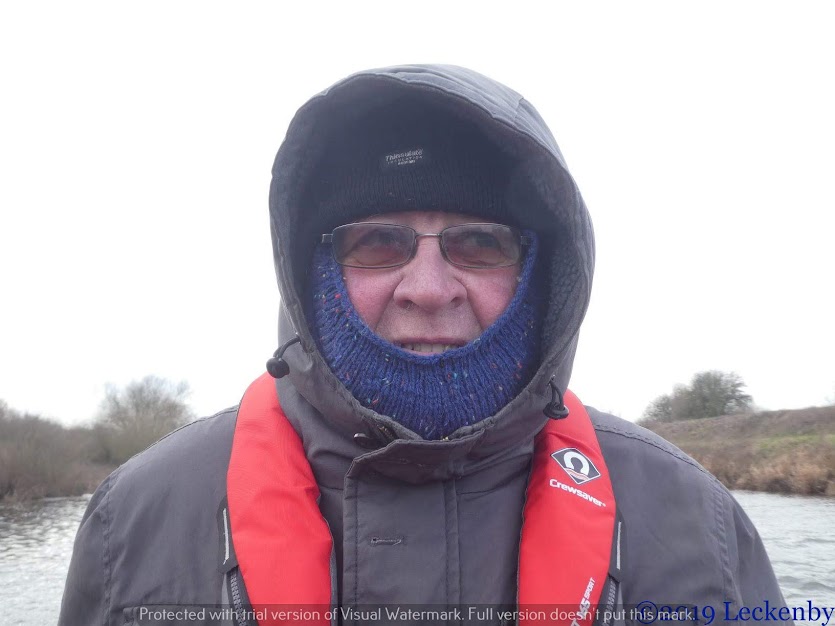 The next reach we know quite well. Under the East Coast Main Line and then under the A1, a distinct lack of fishermen around today. The wind picked up and boy was it chilly. Mick decided to test wear his balaclava, verdict cosy chin and cheeks. I just need to get on with mine and hope it’s ready by the time we do Torksey to Keadby. 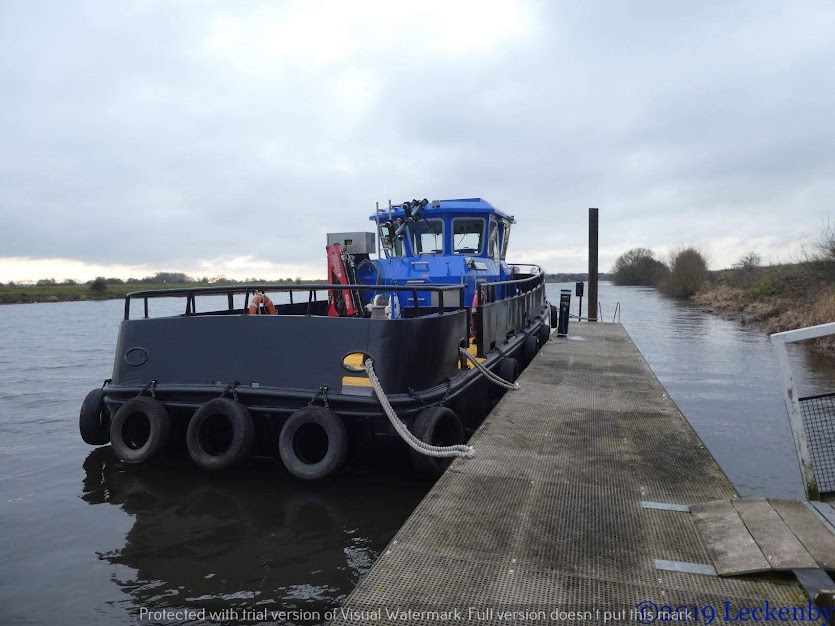 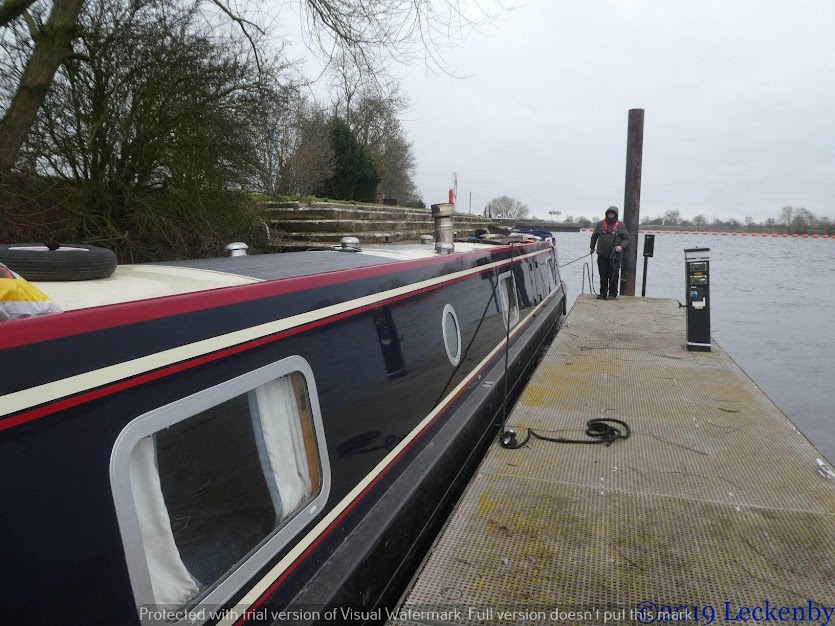 Maid Marian a C&RT tug/workboat was moored up on the outside of the pontoon, looking all smart with a fresh coat of paint. Luckily there was enough space to get a view from the inside of the pontoon whilst facing upstream. Mooring this way round will make emptying the yellow water easier. Once tied up we tried the water taps. Both were frozen to some extent, the nearest only a very small trickle, but the other one showed more promise and might improve with usage. Next the hook up cable came out and we had power. The washing machine was soon earning it’s keep whilst munching its way through an electric card. 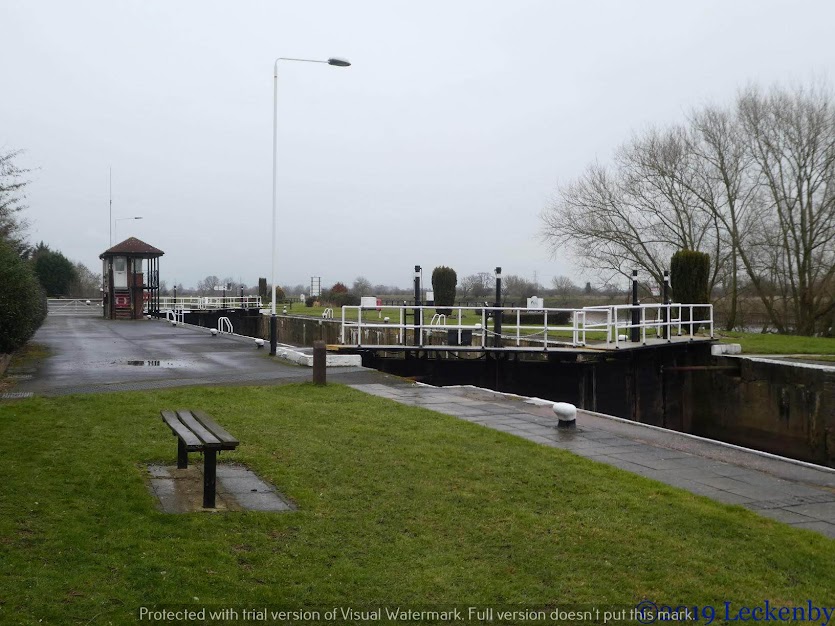 After lunch we took our rubbish for a walk to the lock. Two chaps were walking along the bank, they were discussing where to put some bee hives, wonder if you’ll be able to buy Cromwell Honey from the lock keeper in future? Our rubbish was divided up into recycling and not, it’s so nice to be able to do this properly, we made use of the ladies toilet and then headed for a chat with the Lock Keeper.

Cromwell is always manned by a full time Lock Keeper, no volunteers here as the lock leads out onto the tidal river. Craig (he used to look after Hazelford Lock and we’ve met him a couple of times) was on duty today. We were invited into his hut above the lock to keep warm as we chatted.

Nearly Yorkshire is still frozen over, so he advised that we should call Keadby tomorrow before setting off to Torksey (an overnight stop en route). His large page a day diary sat open, one boat booked in for tomorrow NB Pollyanna, that’ll be us then! The last boat through the lock had been a couple of days ago and since NB Seyella headed upstream there have only been four more boats going that way. Not the busiest time of year, but the locks are still manned when the tides are favourable in normal working hours. 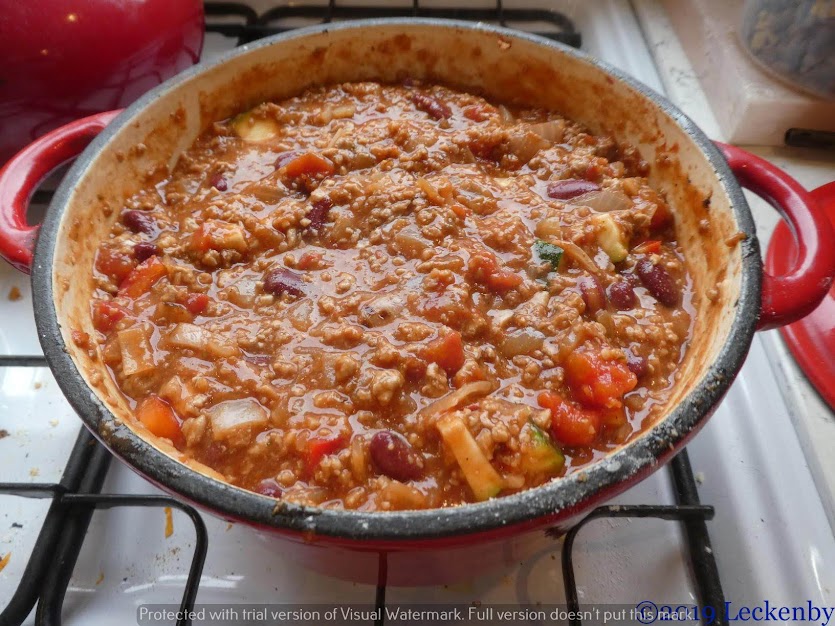 The remainder of the day was spent smelling a chilli slowly bubbling away on the stove top whilst watching lots of things from the PVR, finding places to dry washing and knitting. My balaclava is now nearly half knitted, not enough to keep my face warm tomorrow but hopefully finished for Sunday, a longer day out on the river.