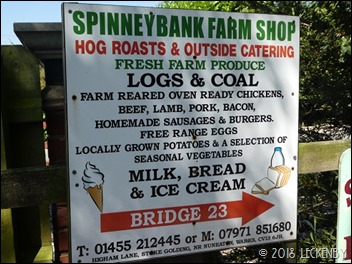 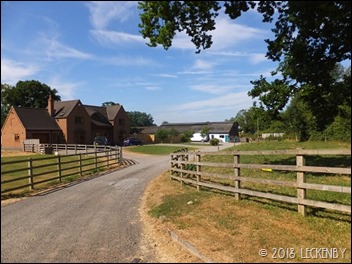 Spinneybank Farm Shop sits close to the next but one bridge, so we pushed off to reach there as close to it opening as we could. They have a small campsite alongside the canal which was empty today, but the Open sign in the shop window was lit. Walking into a small shop like this you are honour bound to make a purchase, we decided that if they had sausages we’d treat ourselves to some for a barbecue tomorrow. With it being so hot and the shop full of freezers the lady had moved quite a bit of stock into the back so that she could try to keep the heat down. A selection of fresh veg hid behind a blind looked good, but we didn’t need any. A tall fridge had milk, cheese, some meats and pork pies, that was our first purchase sorted. She then brought out the sausages, Ashby (pork) or Bridge 23 (herby). We elected for the herby ones, had quite a long chat and then made our way back to the boat. 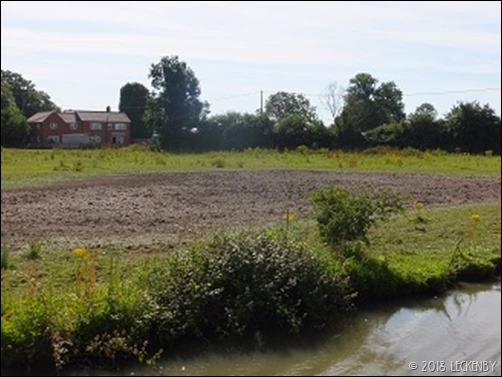 Today we’d set off that bit early with the hope of getting moored up before it got too hot, but the mornings don’t seem to be so cool anymore, so every day it gets hotter earlier and earlier. We passed what had been a pond a while ago, now just crusty dried out mud, any water long since gone. 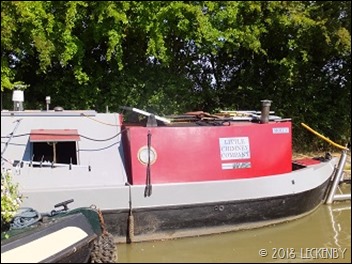 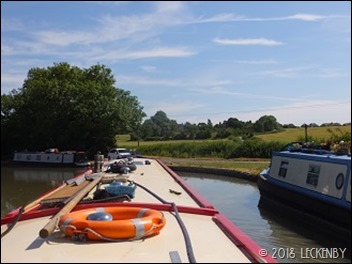 The Little Chimney Company was busy making a new shiny chimney for a waiting boat that was breasted up to them. We wondered if he might be able to trim our fixed chimney down a touch or make the cap we have to cover it fit a bit better, at the moment it just perches on top. As we cruised we spotted several moorings which would be good for a delivery, the road coming right up to the canal, but no obvious address close by to use. We’ll see where else there is up ahead. 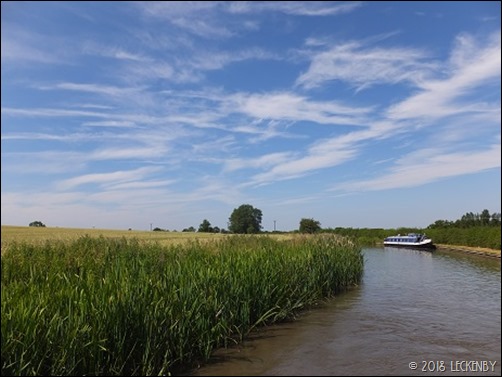 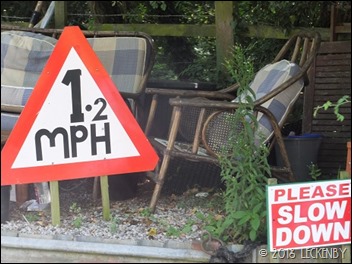 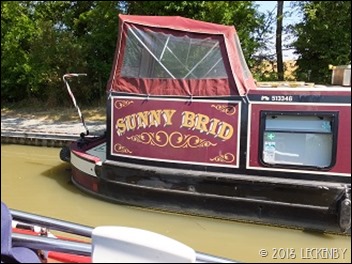 Along with the normal Slow Down past moored boats signs the local boaters have created their own. Yesterday a Speed Check area sign caught our eye, it suggested it was a C&RT sign, but as we’ve never seen these elsewhere I suspect someone has made it up themselves. Today a large red triangle suggested a speed limit of 1.2mph, very specific. 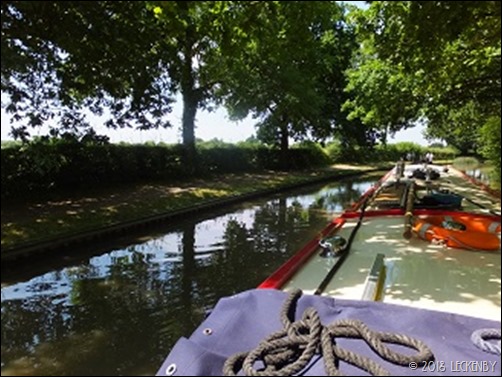 We made note of a few very shady moorings for our way back, it would have been nice to stop ourselves but we wanted to get further today. At Ashby Boat Company a group were loading a day boat and other boats were being prepared for the next hirers leaving a certain aroma in the air.

At Sutton Wharf we pulled in to dispose of our rubbish mountain and whilst there made use of the good water pressure to top up the water tank. The cafe here was very busy, plenty of people following the footpath up to Bosworth Battlefield. We decided to leave this for the way back and pushed off to cover a few more miles before stopping. 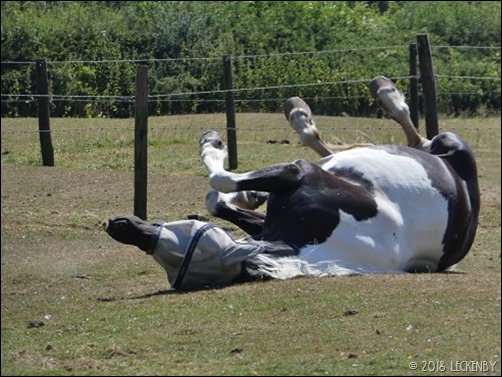 The number of white butterflies today was astounding, no photos as they flutter around to much, I did try! They seem to love all the purple flowers along the towpath and swarms (official name) clouds (my name) of them kept rising from the friendly cover to then rest again on the next set of flowers. We’ve never seen so many, only the occasional coloured one amongst masses of white fluttering wings. Wonderful.

Market Bosworth sits back from the canal to the east and a marina off to the west. A long line of boats stretched out away from the marina entrance, but strangely enough not right next to it. Signs suggest that you have to pay the marina to moor by the entrance £5 a night, wonder what you get for that? We didn’t see anything special about it, other than it was vacant. 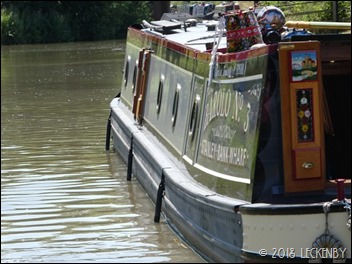 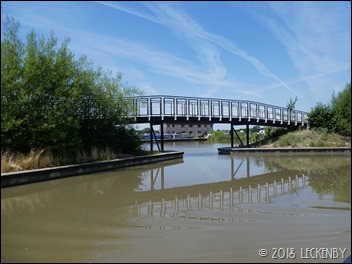 From the first boat on a free mooring, a very jolly lady popped her head out of the hatch, a blog reader, fellow knitter and crocheter and vloger (Link to their latest vlog). Glad you enjoy the blog.

Another mile or so further on and we’d covered almost eight miles enough for the day, now to find some shade. Through a couple more bridges and a shaded spot was available, we pulled back as far as we could so as to give Tilly as much towpath to roam before a boat with three dogs. They didn’t spot me for quite sometime and then came for a sniff round. I guarded Oleanna from the roof and kept them from coming aboard. The afternoon was just too warm to do anything much. We removed windows on the towpath side and had all the doors open, but as there was no breeze this didn’t help. We sat out for a while, but the number of Thunderbugs became annoying too quickly. Just where is that thunder?! Apparently Thunderbugs or Thrips do have wings and tend to swarm in certain weather conditions. They don’t fly in the normal way, but use a method of Clap and Fling to generate lift. There are 6,000 species of Thunderbugs, someone has actually counted them all and they can live for up to 2 months. Amazing the things you can find out, just a shame they land on us and wiggle.

During the evening we had two surprises. The first as we sat eating our tea. We felt the water shift under the boat followed by voices, a boat was on it’s way. You always look out of the window to check the name, anything unusual, just being nosy really. This was an Ashby Hire boat with a couple of ladies on the front drinking and chatting away as their rubber bow fender was getting closer and closer to us at speed, nobody other than me had noticed. Lets just put it this way Oleanna reduced their speed for them and helped  to get them back on a navigable course to pass the next few boats. There were apologies and a suggestion from us that maybe they should slow down, as then if they hit something it won’t be quite so bad!

Shortly after this it started to rain! Remember that, water falling form the sky. Blimey Jaq our rain dancing has worked, well for a few minutes. It lasted long enough for us to return the windows to their frames and bring the chairs in, then it stopped. Most of what fell was most probably evaporated straight away, but at least it tried. 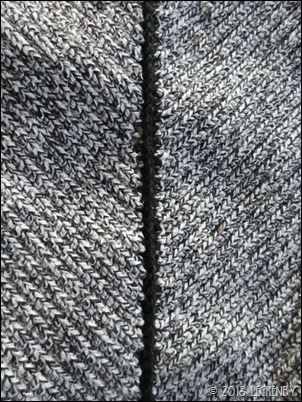 This evening I’ve crocheted a couple of pieces together for my next project. The overall effect of diagonals is just what I was after, just a bit of nipping and tucking on the overall shaping was needed which meant pulling some out  and redoing it. I’ll need to repeat these sections a few more times before the whole throw can be put together.