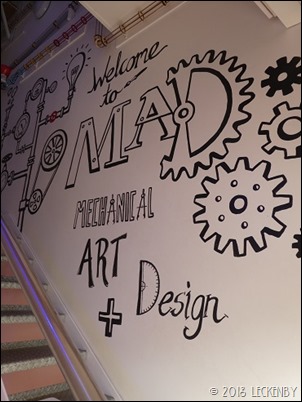 With new never to be used train tickets and voucher in hand we set off to find the museum. Most visitors too Stratford flock to all the Shakespeare sights, birthplace, daughters house, his house, his grave, where he once sneezed etc, but instead we headed straight to MAD Mechanical Art and Design. It took us a little bit to find as Google maps was a little bit misleading in it’s location, but once found it was well worth it.

With our Days Out voucher and train ticket we got in 2 for 1, we possibly could have flashed any train ticket at the chap, but you never know. He explained how the exhibits worked, press the illuminated button, keep your fingers clear and watch, toilets in that corner. So we did as we were told. 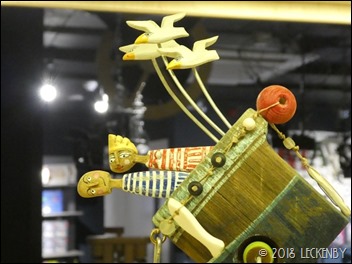 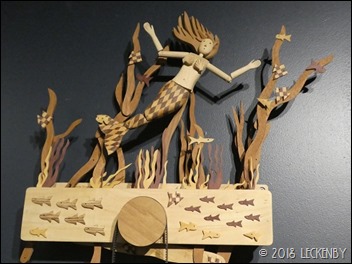 My first experience of such a place was when I was maybe 14 in Covent Garden. Down at the bottom of the market was a small shop filled with wooden mechanical sculptures, some were powered, some you turned a crank, all were made by a chap called Paul Spooner. I fell in love with them. The other day when looking for things we should do in Stratford, apart from the obvious, I knew this was right up our street. 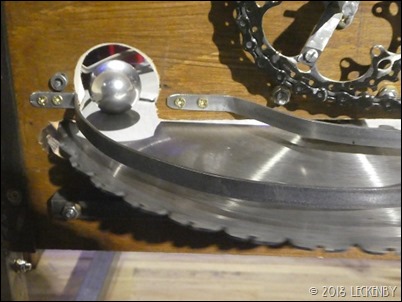 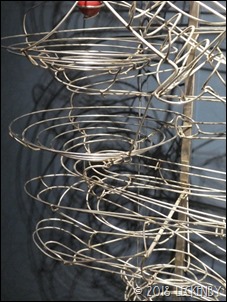 Turning whisks and scone cutters, light bulbs flashing. Thin bent wire formed tracks for marbles to run down the only power required to return them back to the top. 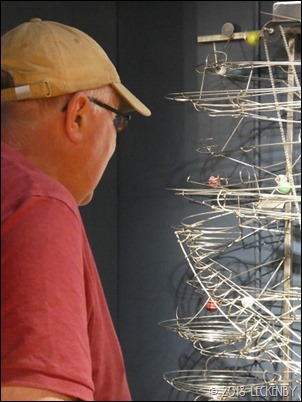 What is it about such things that holds everyone’s attention? You can stand and watch one ball come down from the top following it’s route and then move on. Or you can stand and wait to see which route the next marble will take, a thing flicks over and a whole new course for it to follow, or it gets trapped awaiting for a second one to join it when they will over balance a seesaw and then be sent down two more courses. 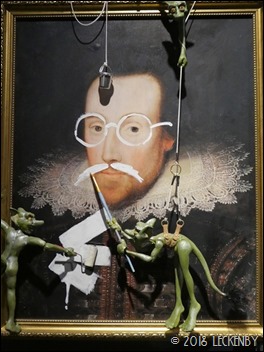 There were plenty of different exhibits all keeping us transfixed. Mick was particularly taken with Number 80, when ever I’d lost him he would just be stood waiting for the third ball to join and release opening up another track. He was quite distraught when it stopped and didn’t work anymore, but the chap on duty came along picked up all the whopper marbles, including the one on the floor, put them in at the top and pressed the button, mended. 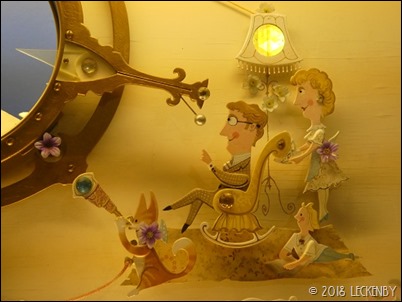 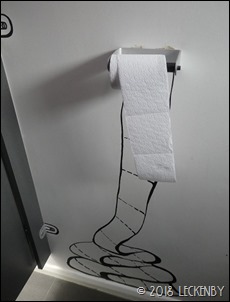 In a darkened room you could watch films by kinetic artists. One chap hates licking stamps so developed a machine to collect his tears whilst chopping onions these then fell on the back of a stamp, more chopping onions and another machine involving a desk pencil sharpener moistened and closed the envelope for him. Surely everyone needs one of these. Another film showed one mans work for the last four years Metropolis 2. Thousands of toy cars are carried by conveyor up to the top of his creation and then left to travel down at 23.4 mph following tracks with sides to stop them falling and fouling the whole city.

We had a great time and would highly recommend it for a few hours. 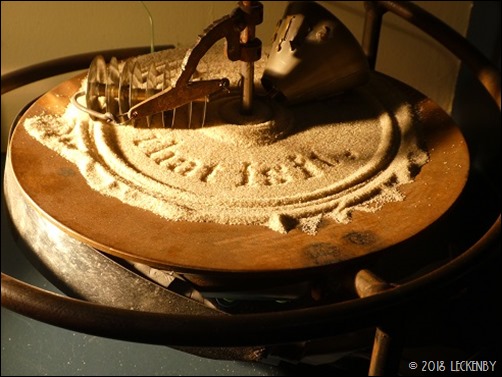 Liz had very kindly arranged for us to join one of the tours around the RSC today. The Swan theatre occupies a Victorian Gothic building which was originally the Shakespeare Memorial Theatre which opened in 1879 after Charles Flowers, a local brewer, donated the site. In 1926 the auditorium and stage were destroyed in a fire, the Chairman of the board Sir Archibald Flower started to raise funds to rebuild the theatre. Instead of using the original building the New Shakespeare Memorial Theatre was built next door opening it’s Art Deco doors in 1932. 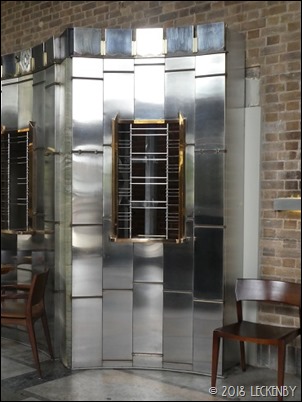 In 1986 The Swan Theatre was created in the shell of the Victorian building, the auditorium based on a Tudor style theatre with a thrust stage, this proved to be quite popular with the public even though it wasn’t a replica. When the RST was redeveloped in 2007 this was taken on board and a similar but 1000 seat auditorium was built here, replacing the proscenium (end on) stage that I had visited when I was 20. In 2011 the new Royal Shakespeare Theatre was officially opened by the Queen. 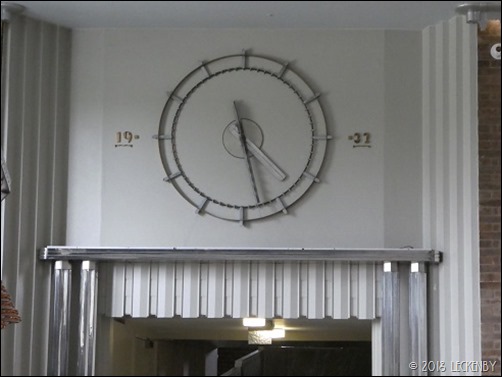 Our tour guide took us around the building, a general tour covering the auditoria, control rooms, space that is used for costume storage and most back stage areas. No photos allowed. It was interesting to see the scale of everything, most of what our guide talked about is very similar in every theatre, although he used slightly different terms to make it easier to understand. I decided I should keep quiet when questions were being asked, which was hard. At least there wasn’t my favourite question, ‘How do the actors keep up with the lights?’.

We had time afterwards to return to the boat for some food before heading back out to see The Fantastic Follies of Mrs Rich in the Swan. Liz had got us tickets on the ground level which are all bench seats, a bit cosy. 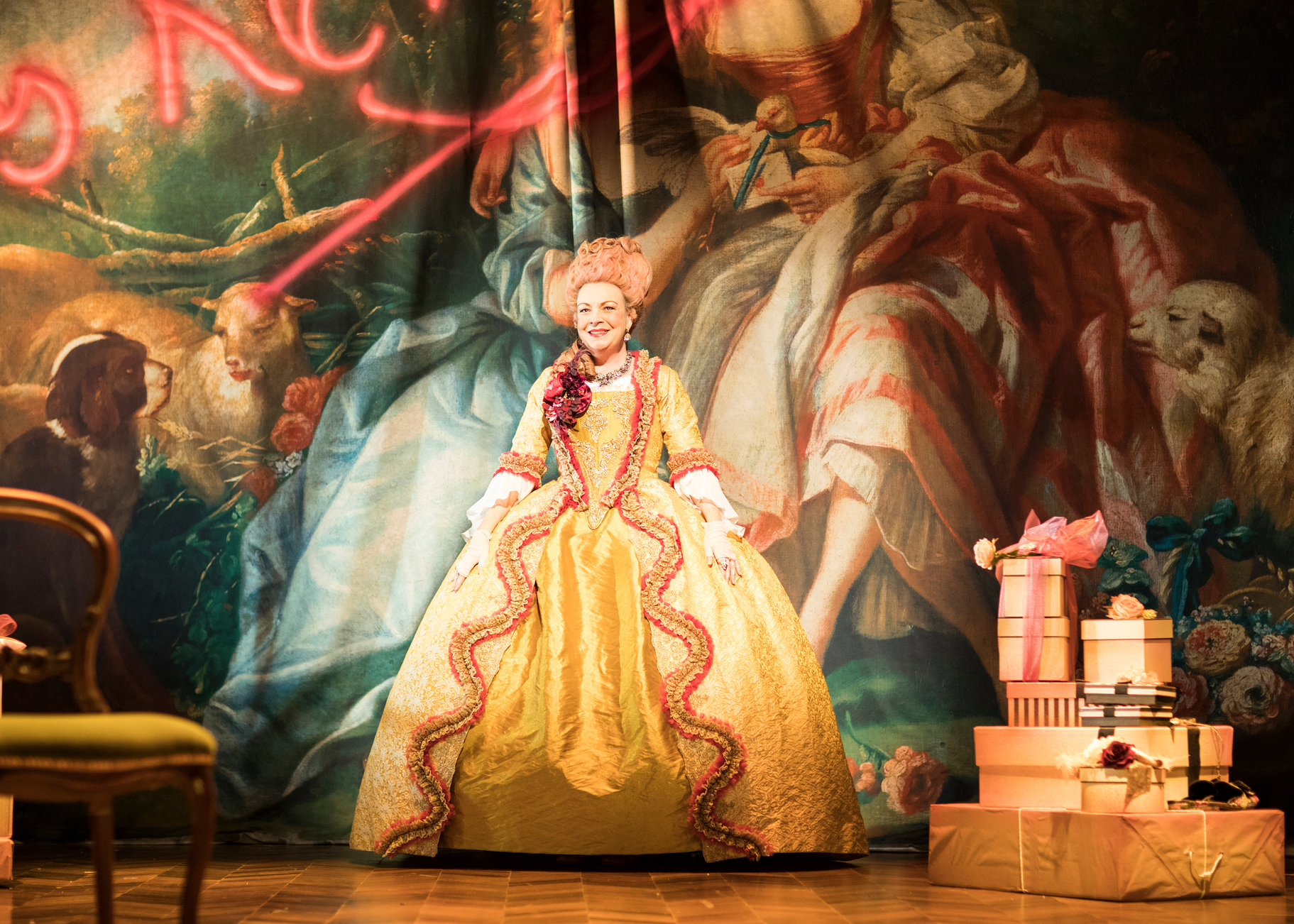 Mrs Rich is a wealthy bankers widow, who has aspirations to gain friends in high places and maybe even gain a title. Those around her have seen her coming and take advantage of her naivety. Many story lines twist at high speed around each other in this comedy of manners written by Mary Pix in the late 1600’s. Four saxophones and a harpsicord provide the boisterous music for the occasional song. Sophie Stanton was extremely good in the title role with the rest of the cast not far behind her. The period costumes were lavish and two Irish Wolf Hounds performed remarkably well despite the gunshots. A very jolly frivolous evening to round off the day.