The blue hire boat came past as we were having breakfast nice and slowly and holding a straight course. We took our time in getting going pushing off at around 10am. The mist that we’d woken to was very quickly burnt off so t-shirts and sun cream were needed from the off. We’ll come back to this mooring at some point as just by the bottom lock is a footpath which leads to Hanbury Hall, another place well worth a visit if you are here (Link). 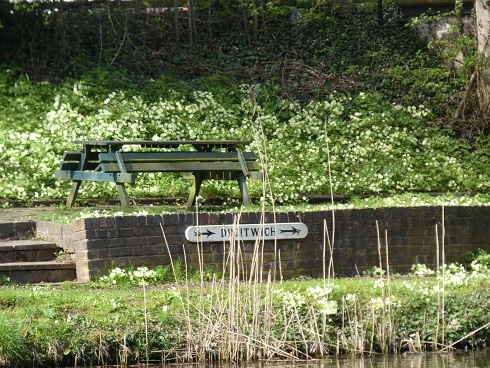 After just a mile we continued straight on at Hanbury Junction. Here you can turn off to the Droitwich Junction Canal dropping down locks and limboing under the motorway to Droitwich. Our planned route next month will mean that we possibly won’t do this stretch as we’ll approach Droitwich from the Severn (levels permitting!) and then return to head back south again. The primroses at the junction were spectacular, almost a carpet of yellow.

We pulled in at the wharf to top up the diesel tank and get a couple of bags of coal. Yes we know it’s very warm outside right now, but our stocks are really quite low now and next week we may be back to wearing padded trousers!

Fat boats on a thin canal

A boat had come to wind at the arm so we held off, but followed on behind as a C&RT boat was waiting to pull in to receive a delivery from Jewsons for the repairs they were doing at the junction. Down the arm were a couple of fat boats, these seem strange on a narrow canal, but they are for sale at New and Used boats. They also look like they are selling wooden pods to put in your garden.

With over four miles on the flat before the next lock we watched the sunny world go by as we drifted along between the reeds. Last years growth twitches as you pass, the new shoots just starting to show above the water. The last few days have woken spring up, the trees are showing their leafy potential and the Black Thorn is coming out into full bloom. Mick wondered what bird made all the large nests high up in the trees. I suggested the Mistletoe Bird!

Passing under the M5 we were at Offerton Top Lock. I filled the lock and then walked down to the one below to fill that one. A chap  here said I’d need to empty the one above to bring the level up as the pound was quite low. This is one of those times you just want to say ‘Really! I’d never thought of that’. To get Oleanna into the lock we had to empty the one she was in anyway. The chap made up for it though by helping with the gates. At the next lock down I could see the blue hire boat. We knew that the lady couldn’t lift the ground paddles and wouldn’t drive the boat into the locks, so they were working each lock in turn. They had picked up some tips from us and he was managing to push a bottom gate closed to save his wife from walking round too many times.

We caught them up very quickly, I walked down and offered to set the next lock. So leapfrogging them I walked down and lifted the paddles and got back in time to help open gates for them. They planned to stop for the day below the bottom lock in the sunshine and we were considering stopping too.

I’ll just have to sunbathe inside instead

Once moored up we had a bit of a tidy up and settled down for the day. For some reason despite being at what looked like a very good M mooring with plenty of trees, I wasn’t allowed out! They said it was for my own safety. This didn’t make sense I am far more capable of climbing trees than either of them! Over the last couple of months there have been reports of tasty parcels of luncheon meat having been left around Diglis Basin and out of town along the canal. Inside these parcels someone has put rat poison, their intentions not clear, but obviously harmful. So we weren’t willing to find out if all the parcels had been found, Tilly will be kept in for the next couple of days, no matter what she says.

We’ve been trying to meet up with a couple of friends who live in Malvern for a while, Easter weekend didn’t happen due to the river coming up and our paths whilst on the boat haven’t quite married with theirs over the last year. So after a bit of texting about our plans for the next couple of days I got a phone call saying that they were on their way over! A quick wash to get rid of the sun cream, put a clean top on and there they were on the towpath. 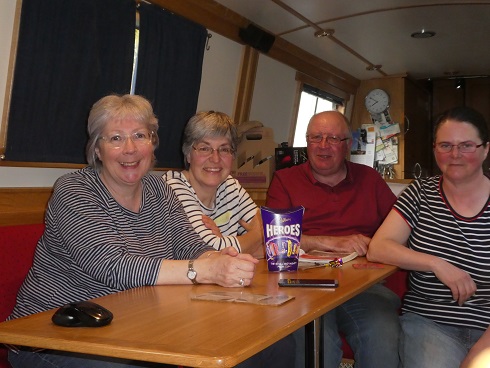 Ali and Christine were welcomed on board, especially as they had brought a bottle of bubbles with them and some chocolates. A guided tour and a glass of fizz each whilst we caught up on the last few months. Then we decided that it would be wise to get some food and headed off in the car to find a pub. Our journey took us back to Tibberton, to The Bridge. By canal this was just over a mile away, but in the car at least three! We had an average pub meal and a bottle of wine as we chatted away the evening. It was very good to see them both and hopefully we’ll get another chance  whilst we’re in the area over the next month.