The annoying dog managed to stay quiet this morning and only started to make a racket at around 8am. Other boats had moved off ahead of us leaving us to do chores before we could push off. The yellow water tank needed emptying along with Tilly’s pooh box. The next thing was to make sure we both had sun cream on any exposed skin as yesterday we’d forgotten and ended up being a touch pink!

We spent a few days around here three years ago and we can highly recommend a visit to Avoncroft Museum of Historic Buildings, you can see the windmill from the canal. Here’s a link to the blog from that day. If you are interested in Telecommunications it is a great place to visit with its kiosks and exchange.

The Queen’s Head this morning

I set the trip computer going and we pushed off with the aim of reducing the remainder of locks into Worcester by about half. Stoke Prior locks came first, the top five close together. We got into our rhythm again quickly. By the time we were in our forth lock I could see a chap walking up from below wearing the familiar bright blue t-shirt and red life jacket, a volunteer lockie. He helped with the forth and fifth lock and then walked down to set the last one which was some distance away. 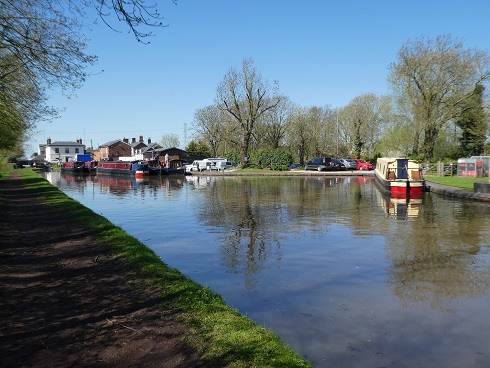 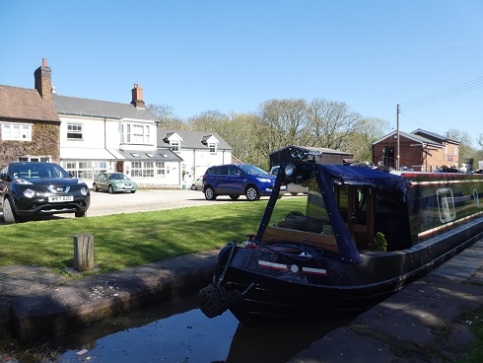 Once at Stoke Wharf we had finally reached our destination of a couple of weeks ago. After Droitwich we’d planned to head up the locks to moor here for our night away in Beverley and then to see the John Godber show at Artrix in Bromsgrove just a couple of miles away.

The Black Prince base was busy with boats being made ready to go out and the lock was in use with boats coming uphill. We thanked the volunteer who headed back up hill to help with a boat that was light on crew, we dropped off our rubbish and carried on down.

A box of matches on a narrowboat

At Stoke Works we pulled in to fill with water and got a load of washing on. Once the tank was full we moved on to the top of the next set of locks where we paused for lunch. We’d just passed a hire boat who’s crew had walked down Tardebigge yesterday, they’d asked a lot of questions about working down locks. We’d both thought at the time that they were waiting to come down the flight, but no they’d winded below the flight and had been concerned about avoiding the cil.They pulled off just as we passed them and zigzagged their way along making slow but diagonally steady progress.

Next came the Astwood Locks, pretty, heading out into the countryside with the occasional train passing. At the fifth lock two ladies were sat in the off side garden knitting in the shade. The cottage just needs its fence painting white to be on the front of a chocolate box and they certainly look after their garden well. 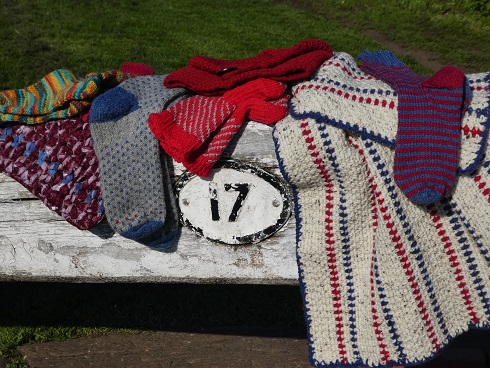 After the sixth lock there is a long pound which it would have been good to do today, but instead we decided to pull in so that Tilly could check out an M mooring on the Waterways Route map. Another reason was that I was wanting to take some photos of my knitting and crochet that I’ve been doing over the last few months. My aim has been to set up an Etsy shop to sell what I make, maybe even take orders. It’s been all good and well making things but without photos of it all I can’t open my shop. I’d been wanting a pretty looking lock and some good sunshine in a quiet location, so today was going to be my last chance for a while.

First whirlygig without the possibility of frozen clothes

Finding shade on the catwalk

With a length of washing line and the red pegs I walked back up to the lock to arrange things for my photos as Mick erected the whirligig and hung out our washing. I in the meantime was checking what this mooring had to offer. Paul has chosen an M mooring rating here and it deserved it. Trees, sideways trees, grass a plenty, friendly cover, not too many woofers and very little towpath traffic. Tilly liked it here so much that she over stayed her shore leave, not a problem on such a warm evening. Plenty of calling for her brought her out onto the towpath but only for her to carry on trotting further into the distance. Just as our food was about to be ready I walked down to see if some encouragement would help. No white tipped tail visible, I walked what felt like half the way to Worcester before she replied to me calling and popped out from some trees. There was lots to tell me as she ran along infront, occasionally stopping for a roll around in the dust. Once she’d been fed and watered she retired to the bedroom to recover. 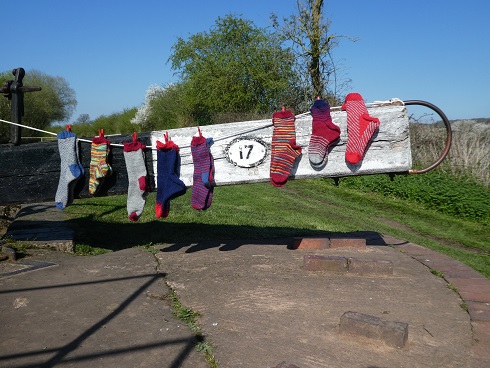 Severn River level at 9am today (at Bewdley a mile upstream from Stourport) 1.254m. It’s gone up!