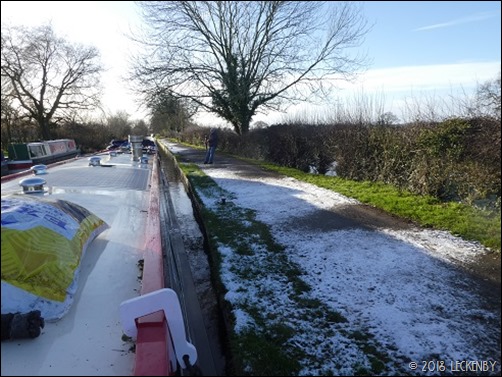 With the impending storm with strong gusts of wind expected we decided to move up the moorings and position ourselves between the water points and the pump out. Here only one tree would be a possible casualty and we managed to pull up hoping that it would miss us should it come a cropper overnight. 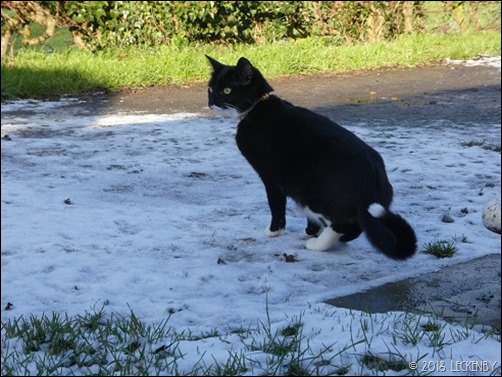 Over night we’d had a light dusting of snow and by the time we moved up and let Tilly out there were only patches of it left on the towpath. I did my best not to loose my paws in it, but decided that even though I wanted to be out it would be safer for my paws if I spent much of the day curled up on board in the warmness. 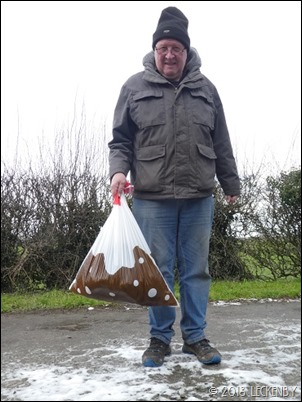 A good tidy and clean followed as we were expecting guests in the afternoon. Marion and John drove up from Eastbourne for a visit and to start on their museum tour for 2018. Their drive up had been an easy one and they very nicely arrived with a Clementine and Almond cake (Rick Stein gluten free!) for us to enjoy with a cuppa. This was very nice and we’re glad that it didn’t all go, so should last us a few days. 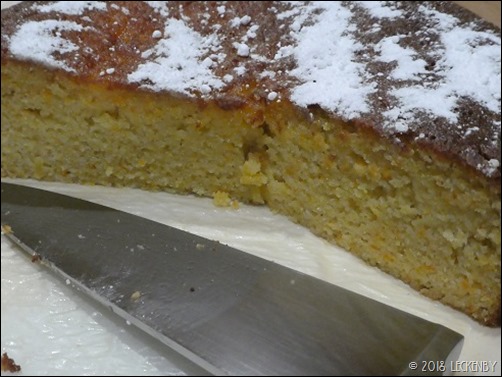 Catching up on news of their latest travels, Christmas and New Year took up much of the afternoon before we headed out to walk along the busy A41 to The Horse and Jockey. We’d visited here twice on our trip on NB Winding Down and had enjoyed the food and beer. Since then it has changed hands, but still served up a good meal for us all. The Tapas menu a great thing for veggies and gluten intolerant folk, being able to mix and match dishes. Mick had a pie and the rest of us Sea Bass washed down with a nice pint or two of beer.

Whilst in the pub it had started to rain, the precursor for the storm! We all settled down listening to the patter of the rain on the roof aiding drifting off to sleep. Before 2am however the gusts of wind started. Everything on Oleannas roof had either been tied down or stowed in the pram cover out of harms way. The poles on the racks vibrated as the wind swept across our roof. Mick had tightened the ropes earlier which meant we weren’t going to biff about too much, but we still rocked as each gust hit us. According to John the gusts reached 59 mph.

These were followed by a not so fierce gust, it was just constant, getting on for two hours of 39mph! Blimey!! This was really quite hard to sleep through. Mick checked that all was okay in the main cabin with our guests and then we both read as the boat slowly reverberated with the wind. From 4.30am onwards there were still gusts, but we managed to sleep through much of it. Not the best nights sleep! 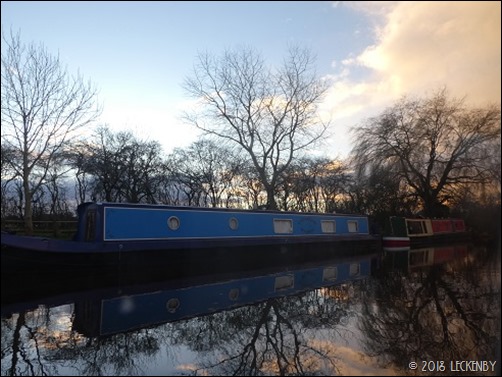 We woke to pretty clouds and a calm world, almost as though nothing had happened. A check round outside and all was where it had been left and no signs of any trees down behind us.

NB Mountbatten was due to bring their butty down to fill with water, so we’d arranged to top up on supplies whilst they were here, our gas bottle from Llangollen having run out just after seeing Richard a week ago! But there was an offer of a day out with Marion and John, a trip to Ironbridge to tick off a couple of museums. Whilst Mick was composing a text to say we’d see Richard next week down stream Ruth called to say that they wouldn’t be moving today due to not feeling so good, so could they catch us next week down stream instead.

We all climbed into the car along with our empty gas bottle (not Calor, so none returnable) and called in at Whitchurch Tip to add it to the caged bottles. then onwards to Ironbridge.

The Ironbridge Gorge is a World Heritage Site, has ten museums helping celebrate the birthplace of the Industrial Revolution. 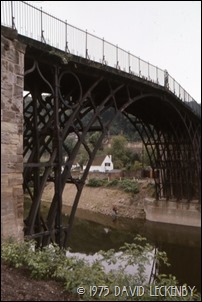 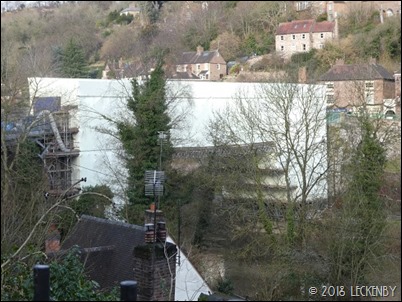 The main attraction is the cast iron bridge which gives the town it’s name. Built in 1779 and opened in 1781 it was the first bridge to be built of cast iron after Abraham Derby perfected the method of smelting iron with coke, allowing cheaper production and larger sections could be cast than previously. Down the banks of the River Severn coal and iron mines, brick and tile works, ship building filled the gorge with activity. Today the atmosphere is very different, quieter and cleaner, English Heritage are currently undertaking a huge restoration project on the Ironbridge. The whole structure is swathed in scaffolding and the sound of grit blasting below your feet can be heard as you walk over it. So sadly the elegant structure can’t be seen for the next year as the works take place to keep the bridge for future generations. 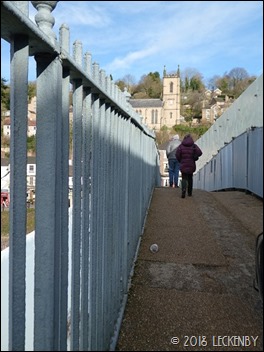 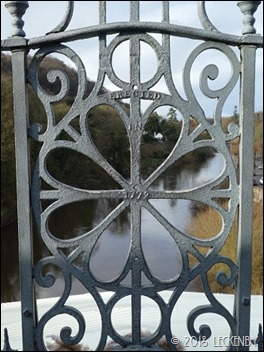 Owned privately there was a toll to pay to cross. This was set at a standard price, everyone would pay the same even if they were royalty and the prices remained the same from 1781 to 1950. A guinea would buy you an annual pass and the only persons exempt from paying were the ferrymen who lost their livelihood when the bridge opened. 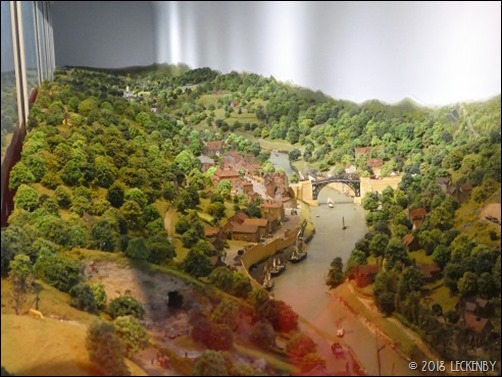 After the toll house our first museum was The Museum of the Gorge. Here the star of the museum is a 20meter long model of the gorge laid out as it would have been when William V, Prince of Orange visited on the 12th August 1796. A team of people must have worked on the model, at first I thought it would have taken a month, but that is likely to have been how long it took to just assemble the pieces. 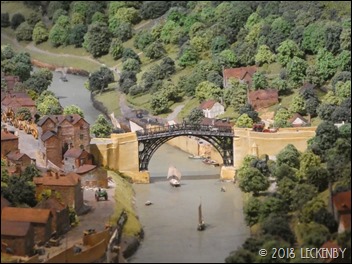 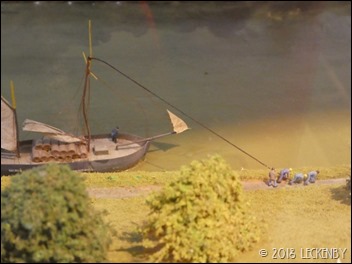 The scale trees and figures were almost certainly bought, but the number of trees must have filled at least a shopping trolley and a half. 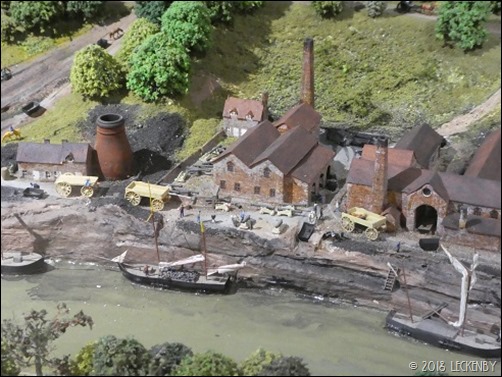 Each building has been made individually to match what would have been there at the time. Boats were bow hauled upstream, carts waited for goods to be loaded, inclined planes moved coal down from the canal to the smelting works. Apparently the model was damaged in the floods of 2000 and had to be reworked. 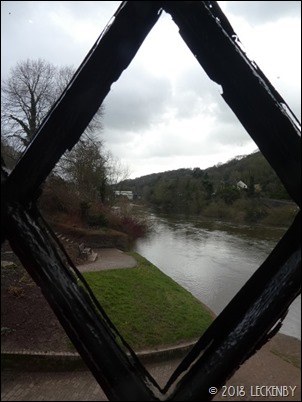 The rest of the museum is interesting giving a brief  history of the gorge. Views down the river to the iron bridge would be great if it hadn’t been for the scaffolding.

We then climbed back into the car to head for Blists Hill Victorian Town. 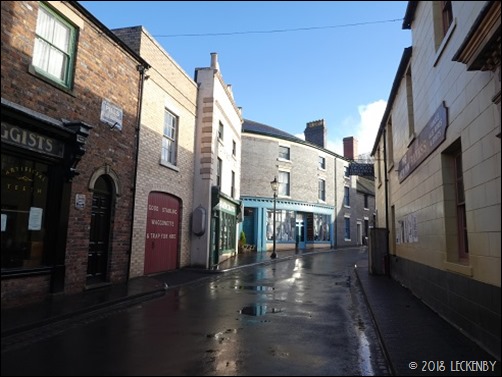 The museum recreates a town around 1900. Originally the area was filled with industry, consisting of a brick and tile works, blast furnaces and coal, iron and fire clay mines. It opened in 1973 and has been growing ever since as original buildings have been relocated to the site. It is similar, yet smaller to the Black Country Museum. The whole of the town is inhabited by Victorians and should you want you can exchange you £’s and p’s for £sd at the branch of Lloyds Bank so that you can purchase goods around the town. Most of the inhabitants play along with the theme quite well. 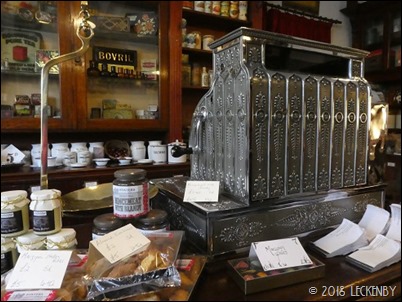 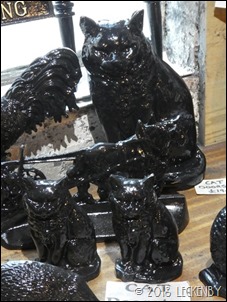 The conversation in the grocers seemed to be more 21st C and it wasn’t until a long while later that the penny dropped about the conversation going on in the Post Office between two women about how things would soon improve (Suffragettes!). At the bakers fresh bread can be bought (the last loaf and a roll to us), plaster motifs and cast iron figures are made and sold by craftsmen who are happy to talk about how life would have been. 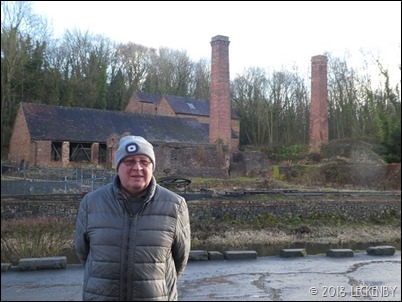 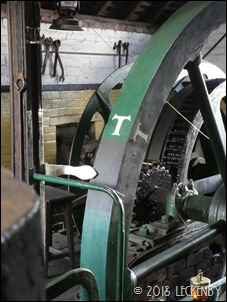 One chap was powering down the steam engine that worked the lift down into the mines when we arrived. He demonstrated the mechanism and talked through all the different layers that the mine would reach, a small block of wood attached to a string showed which level the lift had reached, string technology from the Victorian era. 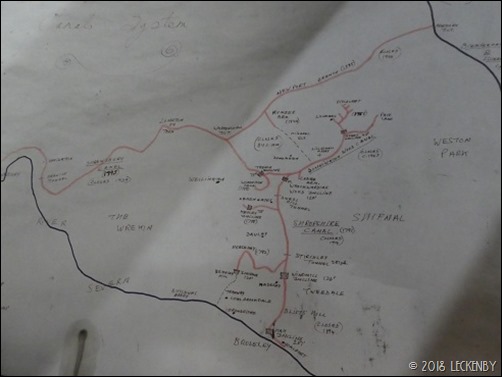 On the wall was a hand drawn map of the canal network leading to Blasts Hill. Mick had correctly guessed that they would connect to the Shropshire Union at Norbury Junction, quite a large network of canals did. 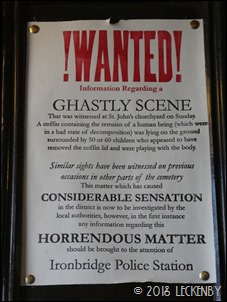 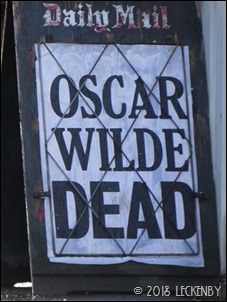 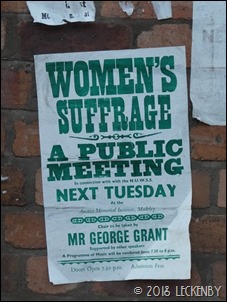 Two ladies were sat by the range in a house where the back rooms were rented out to the doctor who visited one day a week. Across the top of the stove sat a bacon carrot and lentil stew slowly simmering away. The ladies are wanting to try to get one of the ovens working on the range, but this will take quite a bit of experimentation as there are allsorts of variables to move hot air around the ovens. After we chatted for a while the ladies may start cooking jacket potatoes on the fire. We weren’t sure if foil was around in 1900, research suggests that tin foil was used, not sure if potatoes were cooked in it and it did leave a metallic taste to the food, hence we now use aluminium foil. 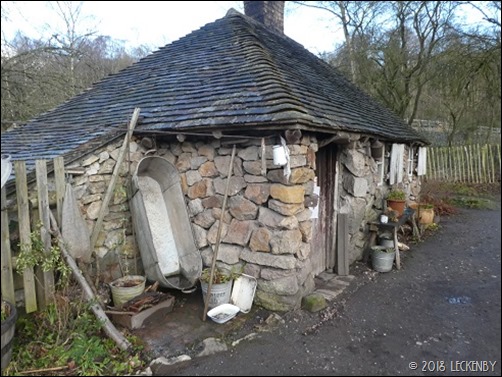 A squatters house further down the hill gave a hole different slant on life, few of the same home comforts of gas lighting and an indoor tap. Here a family had built the four walls and roof of their house in 24hrs to claim it as a squatters house. A small fire and thick walls did thier best to keep the cold out, along with a Delongi heater in the pantry!

Sadly the museum was closing it’s doors at 4pm so we had to rush back up the hill after a brief look round the Toll house from Watling Street. Another couple of hours and we’d have had time to see everything. 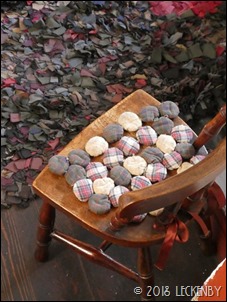 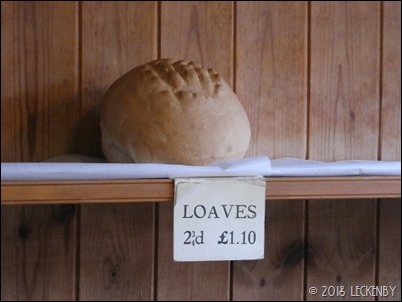 If you came to the gorge for a weeks holiday you could easily make use of the year pass at £25, cheaper if bought on line, which gives you access to all ten museums. A fortnight would make for a more relaxed history filled holiday.

Marion and John kindly returned us to Grindley Brook before they started their return journey south. As we walked up to Oleanna in the now fading light we could see that we had some new neighbours. Richard and Ruth had brought NB Mountbatten and the butty to fill with water in the afternoon. They planned on staying put overnight, so we arranged an early top up tomorrow before NB Mountbatten sets off on it’s last coal run upstream before bridges close on Monday.