The big man visited us during the night and left all three of us plenty of goodies to open in bed. Tilly wasn’t too impressed by the refills for the lint roller, but Father Christmas must have known what she was getting as her main present as her stocking was full of balls. I’m really looking forward to see how many friends I can attract with the fat balls in trees!

In London my nephew Josh had set up a motion detected camera on Christmas Eve to see if he could disprove the existence of Father Christmas. Unfortunately for Josh the batteries ran out before anything could be detected and recorded, or was this just the magic of the man in red! 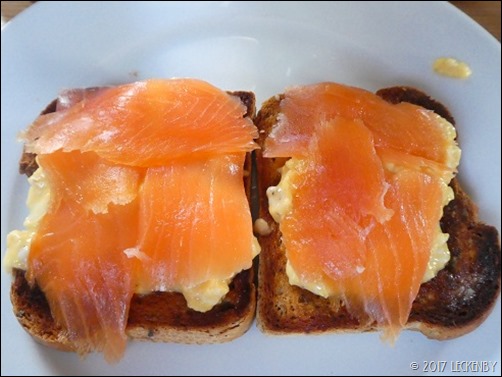 Scrambled egg with smoked salmon accompanied by some Bucks Fizz went down well before we opened our Christmas presents. 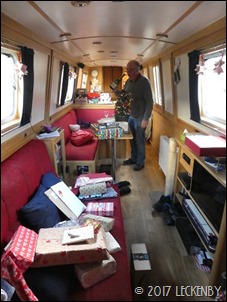 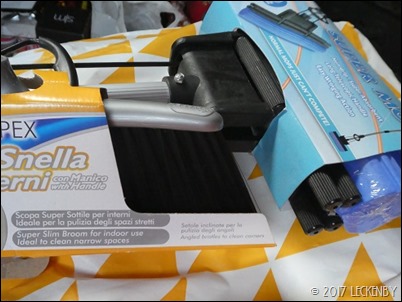 This year Oleanna had joined in with the present giving. I never thought I’d be the sort of person who’d be pleased to receive a mop and sweeping brush. These have telescopic handles and quite easily sit under the gunnel in the bathroom. The broom is especially designed for narrow spaces, what more could you ask for. 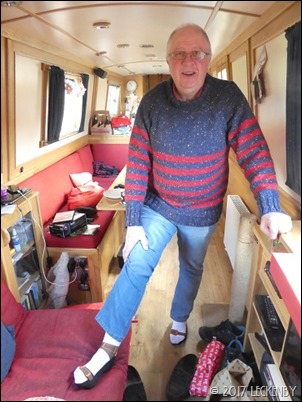 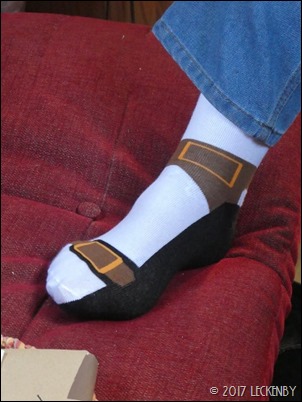 Mick’s quandary on the socks and sandals front was solved and here he is wearing his warm Pip made jumper. 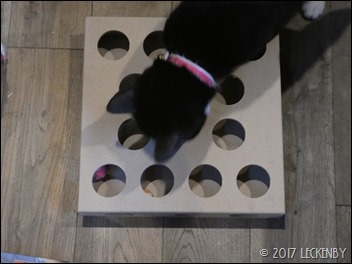 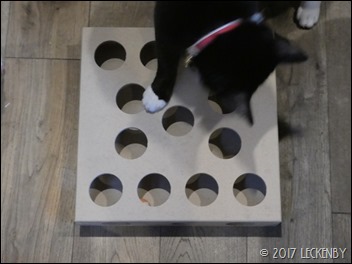 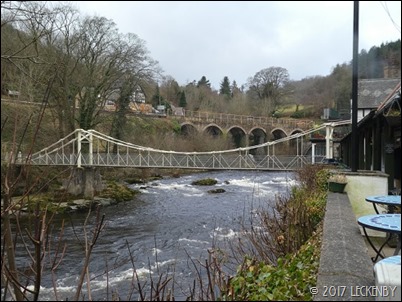 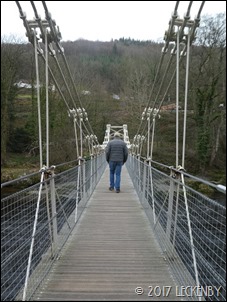 Before we got settled into cooking we headed off on a walk to the Chain Bridge and Horseshoe Falls. 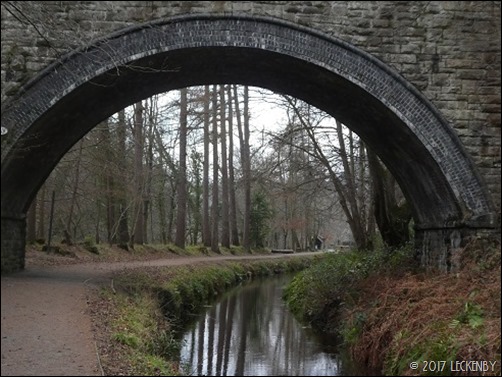 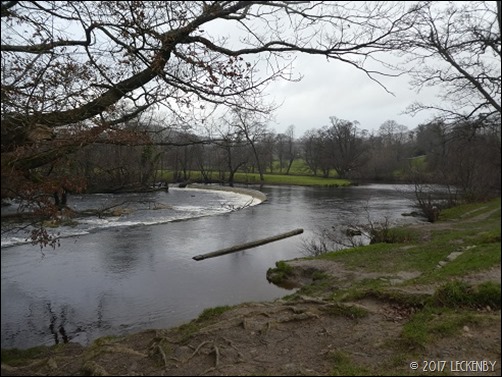 The Horseshoe Falls was designed by Thomas Telford and diverts water from the River Dee into the canal. The last section of canal is very shallow and only the horse drawn trip boats can now make it this far, they have slight V shaped bottoms which must just fit down the shallow channel. When Thomas Telford was appointed as the general agent for the Ellesmere Canal in 1793 he had no experience of waterways and together with William Jessop they came up with the engineering that makes the canal so famous today. As a result Telford became one of Britains most famous engineers. 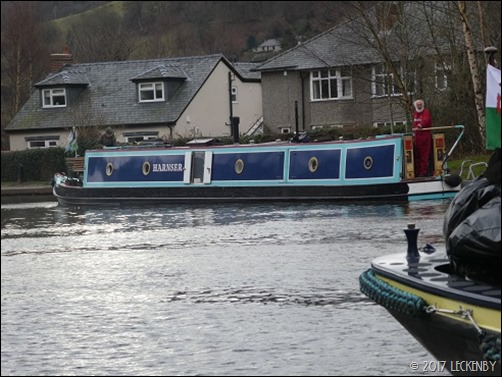 Plenty of people were out for a Christmas morning stroll along the canal and despite the drizzle gradually turning into rain we enjoyed ourselves. A few boats were moving, NB Harnser came down to the basin to wind and wave. 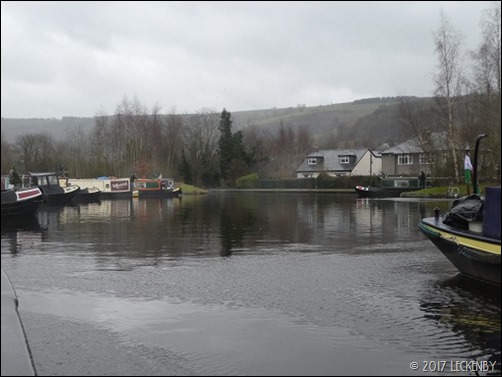 An Anglo Welsh boat came to moor, but the gusting wind made manoeuvres very difficult for them. Plenty of people came out to offer advice, but in the end they had succeeded in winding so returned back onto the cut where there wasn’t going to be quite so far to be blown! 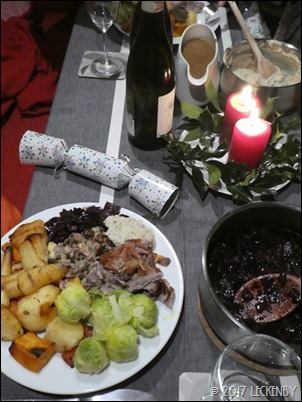 Our Christmas dinner was exceptionally tasty, the duck one of the best we’ve had. All the accompanying veg made a mountainous plate of food and we have more than enough to keep us going over the next few days. A lull with another glass of wine to watch Dr Who before it was time to open my birthday presents and cards and blow out the candles. 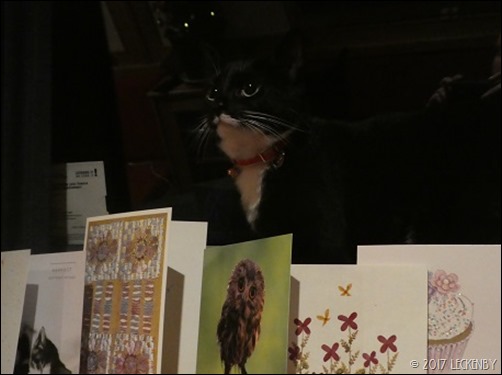 My cake, a Queen of Sheba Cake, was maybe a little bit under cooked, the recipe I have is really quite vague as to temperature and cooking times. The advantage is that it’s meant to be gooey in the middle anyway, just this time it was bordering on runny. 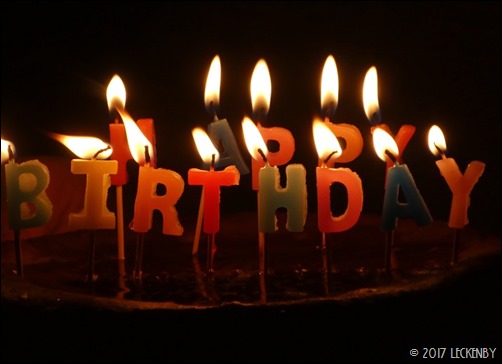 A lovely day all round. 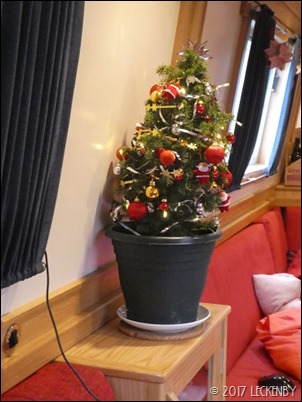