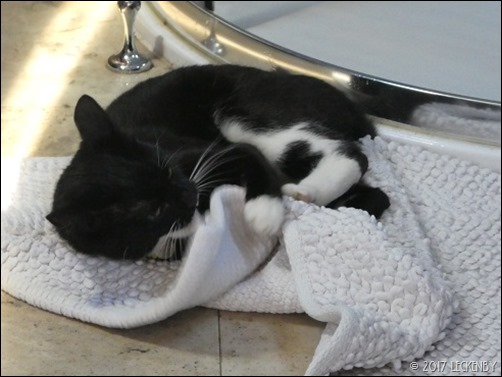 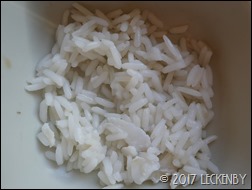 The water tank was very low after all the washing we’d done yesterday, so Mick laid out our two hoses to top it up. As we’d had the central heating on for a while this morning I used the hot water and had a shower so that we could leave our mooring with a full tank and a clean me. Tilly was back on form as the bath mat was thoroughly murdered! The small amount of white fish had been picked out carefully from the rice she got for breakfast and so far it has all stayed in her tummy, fingers crossed that the system reset has worked. I think I’d like fish everyday from now on, pink food is nowhere near as good! 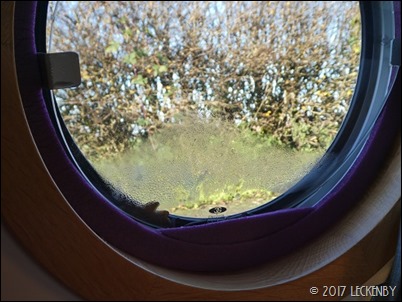 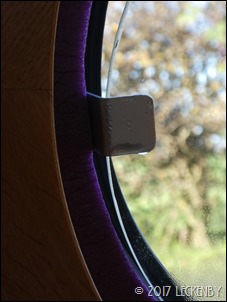 Before going to bed last night I had found my other type of double sided tape. I applied a layer of this on top of the original tape. The original had stuck very well to the porthole, but not so well to the carry mat. This other type didn’t look that different but had worked with the carry mat on our freezer. So foam layer applied we waited for it to pop off over night. It didn’t! The temperature had dropped over night and the foam had done it’s job. No condensation running off the frame, I just need to add some more bits to the brackets that the window rests on as these were dripping. 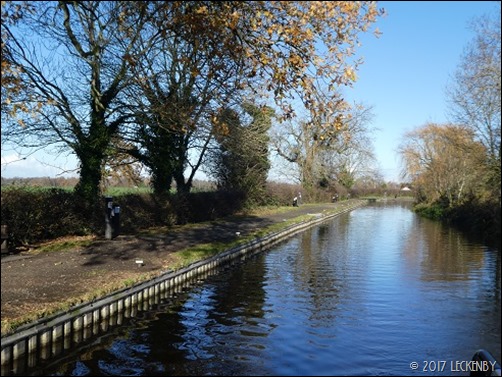 Time to move on. Not far, but onto new water for all of us, not much new water, but new. The sun was out making it a chilly but bright morning. We pootled past the Winter Moorers. A short distance on a dog walker was drawing our attention to a large pile of logs freshly cut. He was of the opinion that it was Ash but the tree surgeons further up said it was Elm, much harder to split than Ash. We may go back for some. 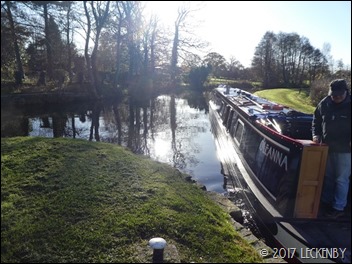 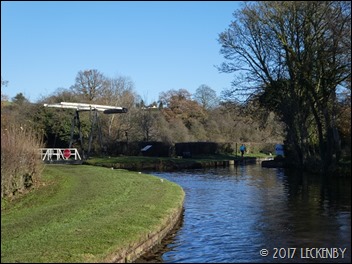 A mile on and New Mills Lift Bridge sat waiting to be lifted. This bridge sits at the end of the Whitchurch Arm which goes off to the left quite sharply, not enough room to turn Oleanna in. A short distance further along there is a winding hole where we turned and made our way back down onto the arm. We pulled into one of two gaps as a Kingfisher dashed overhead (our first sighting on the Llangollen), tied up and retired inside to warm up and have lunch before going to see what Whitchurch had to offer.

It’s about a mile walk along what used to be the old line of the canal. There are plans to extend the canal and build a basin on waste land, but this will no doubt take years to achieve. Plenty of new housing is going up. Opposite our mooring is busy with houses being built and then along the path further towards the town there is a new estate. Signs by one house suggest you should ask about the pumping station before you buy it! Maybe there are issues with water levels here. 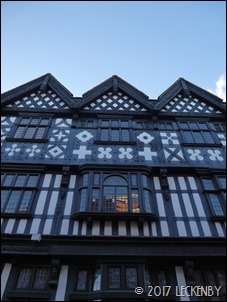 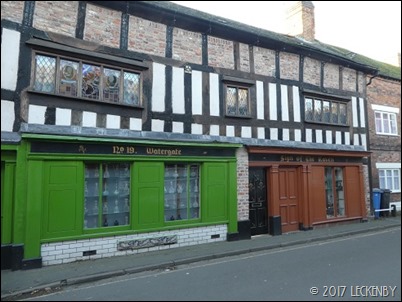 We had a brief look round the town, sadly we’d missed the Friday morning market but there was still plenty to see. Half timbered buildings, new small arcade leading to Tescos.

Down Watergate Arcade there wasn’t much to see at first, a dog grooming parlour, but then a window that we couldn’t but help stop and look in. This was Powells Pies. Inside there were three people gradually working away making pork pies. A chap, grandson of the original Powell butcher, was raising the hot crust around wooden dollies. A lady sat opposite weighing out the pork then packing the correct weight into them. Another lady sat crimping the lids onto the pies. Ovens lined the back wall and cooling trays were crammed with a sea of freshly cooked pork pies. What a shop window! There was a small sales counter so it would have been exceedingly rude not to have gone inside and buy a pie. 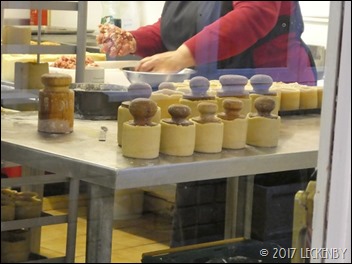 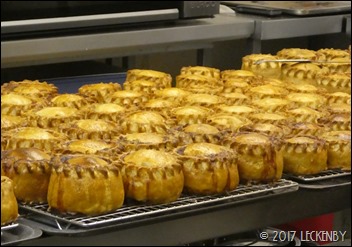 Powells Pies sell mostly at farmers markets across North Shropshire and Cheshire and earlier this year won  a Bonze Medal for their pork pies at the Great British Pie Awards. Mick is looking forward to sampling his pie tomorrow. 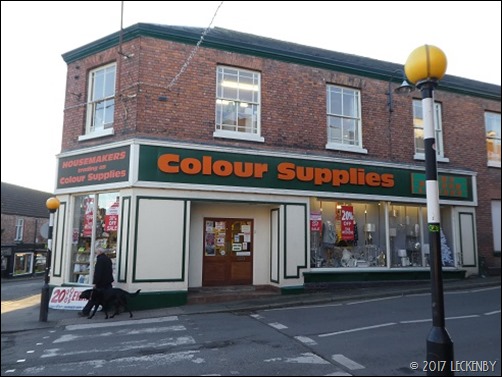 Next we found a cross between Boyes and Barnitts (if you ever go to York Barnitts is worth a visit). Colour Supplies has almost everything under one roof, sewing, bikes, skateboards, gardening, diy, bedding, Christmas, paint, lights etc. We had a good look round finding some high ball glasses (down to only two now) and something else that Mick paid for but has immediately forgotten about (Christmas is only a month away!). It being Black Friday we got money off too. 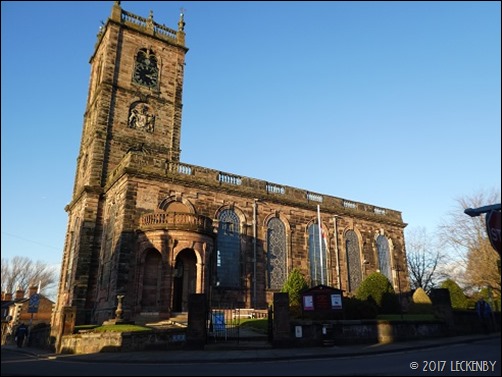 Walking back we popped into the church on the hill, St Alkmunds Church. 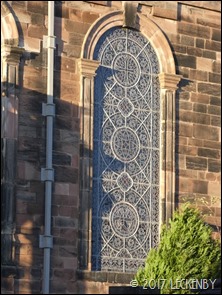 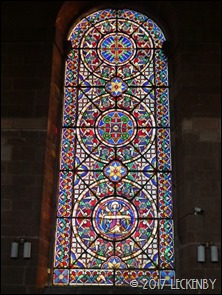 In the late afternoon sunlight it glowed and the patterns on it’s large arched windows drew us in to have a look. It is the forth church on this site since White Church was founded in 900AD. It is the first neoclassical style church in Shropshire and was built in 1713. When first built all the windows were just plain glass apart from two crosses made from glass for the previous church. The Victorians had a love for stained glass, so parishioners set about filling the windows with colour. Warrington designed the windows which are very fine. One has been removed for essential restoration in Chester leaving a large scaff tower in it’s place. 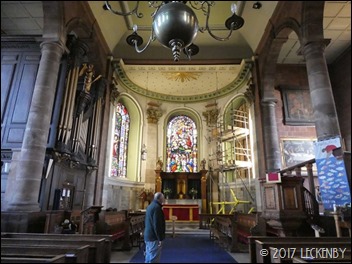 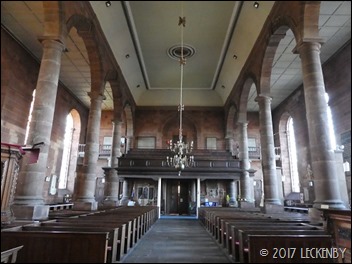 A lady busied herself arranging flowers so that the church can look good for the Festival of the Crib tomorrow. 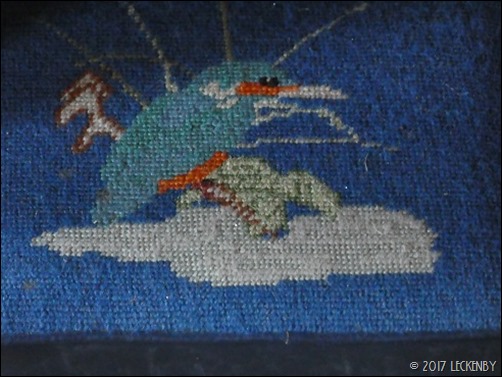