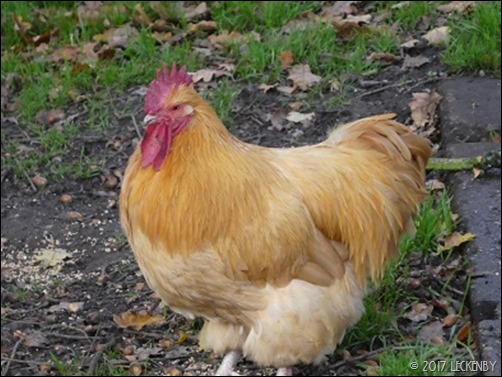 The cockerel at the pub decided that dawn was at 7.30am, however no matter how he persisted Mick didn’t notice! 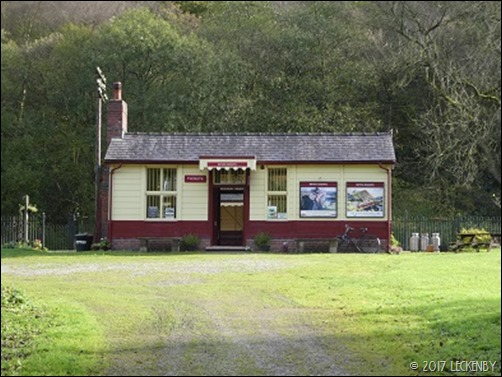 We planned to be on the first train of the day through Consall Station, but this wasn’t until 11.28 so we had plenty of time to get ready. No catching up with news on facebook, tv, radio, or phones, we were totally cut off from the outside world. Rather nice. As we leisurely ate our breakfast a steam engine came past twice on it’s own, presumably checking out the line, clearing it of leaves before the Halloween Family Fun Day started. 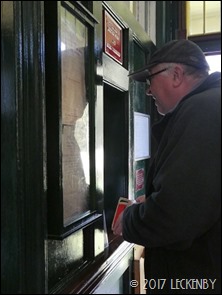 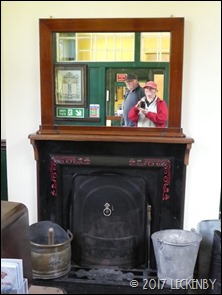 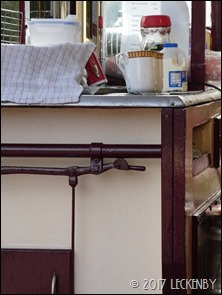 Being in the middle of the line we didn’t expect there to be many passengers waiting and we were right. Two photographers and one other passenger. We’d not been able to buy our ticket in advance on line (at a discount price) so Mick chatted away to the chap in the ticket office thorough the little glass window. He was a bit surprised that Mick wasn’t 60 so therefore had to pay full price, today the tickets were half the price of those at the weekend, so we didn’t mind. The sun was out and we waited along with the photographers out on the platform. An old refreshments trolley stood with it’s tea urn at the ready to provide the waiting paparazzi with a coffee each, this was also manned by the ticket office chap, he was also station guard, in fact he was the only member of staff at the station. 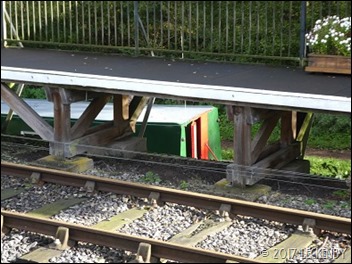 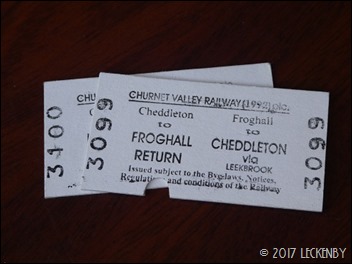 As we stood waiting a narrowboat came along under the other platform trying to find a space wide enough to moor in. Shame we weren’t on that platform to be able to look down to them. A phone rang in the ticket office and then we got personal platform announcements. Mr Consall Station walked up to the photographers who were already set up waiting for the engine to reverse into the station, then he came to chat to us. The first train of the day was going to be late. This was due to there being too many passengers, the train was already full at Cheddleton and plenty more were waiting at Froghall, so an extra two carriages were being added to the train! In the 21st Century we’d all just be expected to squeeze on and stand, but out here where time stands still you can wait until they provided us all with a seat. 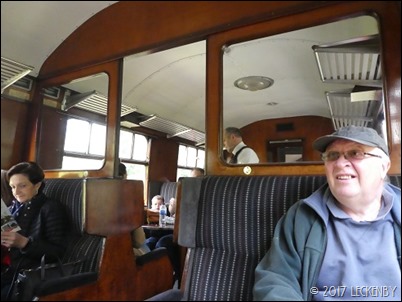 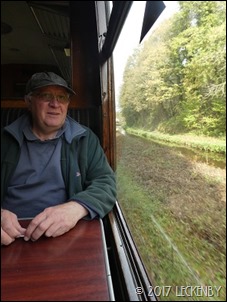 Eventually a bell rang out on the platforms, this meant that the train was on it’s way, four minutes away. As it pulled up to a halt a guard leant out of the window and suggested we get on at his end and walk up a couple of carriages for seats, the train was too long now for the platforms. Carriages were full of families out for the day. Mick and I soon were in a quiet coach at the end away from all the sweats and excitement, not saying that we weren’t as excited as the kids, we just weren’t being as noisy about it. At Froghall the platform was full and the train filled up. We felt rather under dressed as there were Ghost Busters, Witches, Superman, we really should have made the effort. 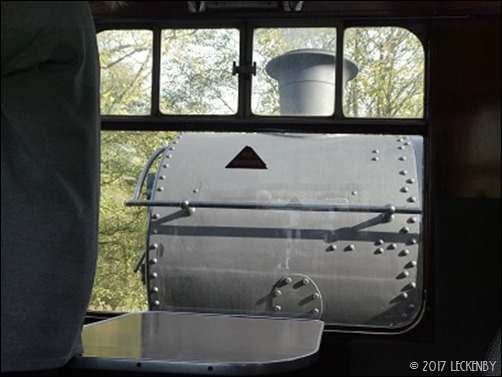 Here there was a long wait, the engine had to uncouple, reverse up the line and return on the other, fill with water and then head down the line to then reverse recouple onto the now front end of the train. This all took quite some time. Balloon sculptors were on the train, a pirate sword and a teddy bear were made for the kids across the way, the chap not even looking at what he was doing. The carriage soon filled with dinosaurs, flowers and other creations, but he didn’t make any for us! 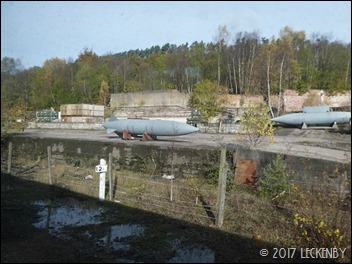 Passing through the old wire works we could see more missile shaped objects just lying round, according to a comment on the blog these are more likely to be under wing drop fuel tanks. Thank goodness the MOD don’t just leave bombs lying around. 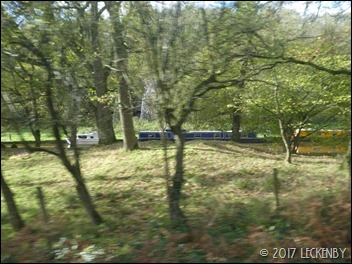 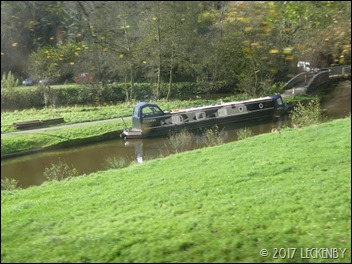 We’d moved to the left side of the train giving us a better view across the valley as we made our way back towards Consall and then onto Cheddleton. The canal for a stretch would be right alongside, then high up, then below. At Cheddleton there were announcements, but it was all a bit noisy to hear what was being said. In the end we found out that another carriage was being added as demand was unprecedented. Last year they had run two Halloween Specials and the uptake was so low they lost money on them, this year it had gone the other way. The time table was now out of the window, nobody seemed bothered by this as the Ghost buster pirate sworded lad fought off Superman and his gang witches armed with laser firing flowers and teddies. 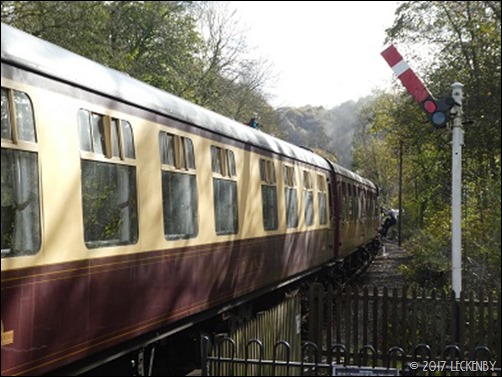 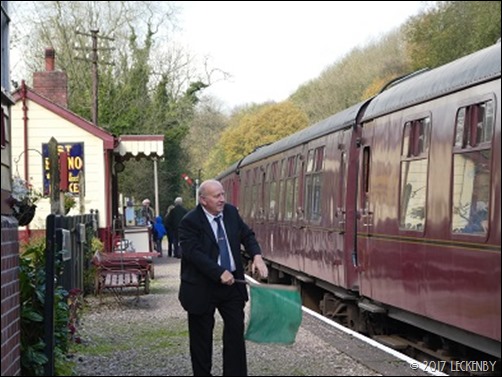 Once on the move again we crossed the level crossing and entered Cheddleton Tunnel before pulling up. Here the engine had to uncouple and rejoin the train behind us. Then we were back into the tunnel, this time without the cabin lights on! Scary!! Back up the line to Consall where we walked back along the train to alight, no being rushed to do so. In fact they stopped the train so more people could get off! We thanked Mr Consall Station and walked out back into the quiet of the trees. A great few hours on the train. 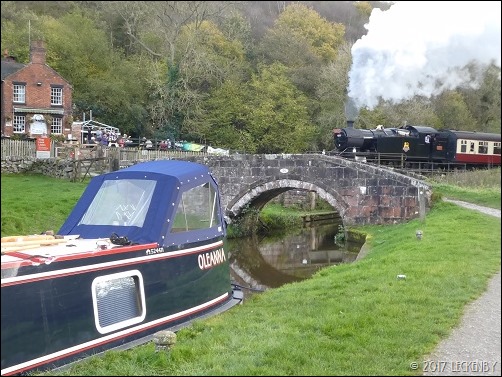 There was time to have lunch before the engine came back, I was stood waiting to take another photo, this time with Oleanna in the foreground. With this done we headed back up stream to find a mooring for the night where Tilly could go out. 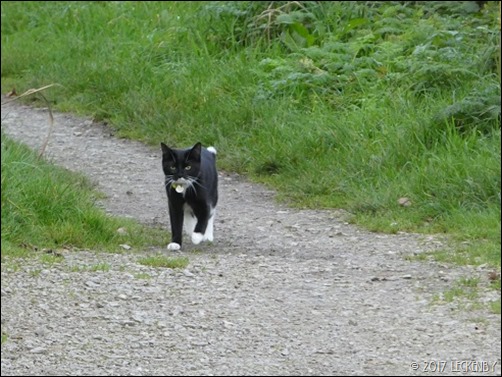 Up off the river and through the next lock we decided to moor opposite the station, just as the final train of the day came in. No more trains until the Santa specials in December. The engine shunted carriages around for a while as I had a walk up and down the towpath with Tilly, eventually leaving her to play with the rather rowdy pheasants.