Overnight rain had been forecast, but not much actually fell, which meant that the river had remained at a steady level, so we weren’t going to be stuck. As we’d managed to come this far we did have to have a look round. 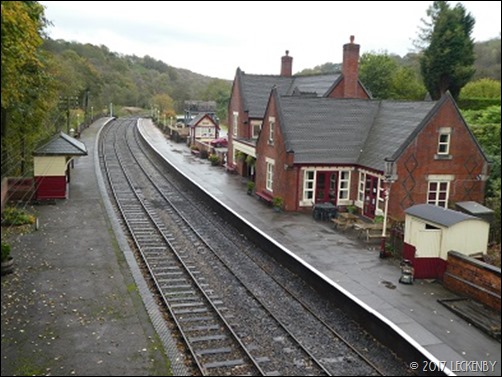 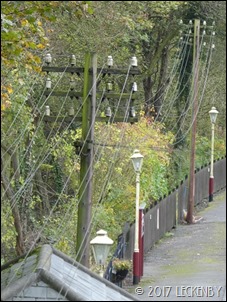 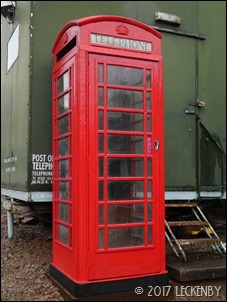 First port of call was Kingsley and Froghall Station, the furthest south you can go on the Churnet Valley Railway. Masses of communication wires hung above a platform. Mick said that originally the wires would have been bare with no insulation, but that is no longer allowed. To the rear of the station stood two GPO temporary emergency exchanges which the railway must use for it’s communication system. Along side them stood a K6 phone box, painted in a slightly garish red.

Today there was a private charter train running, we’d been able to hear it from Oleanna, but it didn’t come into the station whilst we were there. Tomorrow is the last day of planned trains on the line before the Christmas Santa trains in December. We might just treat ourselves with a return as we received our first full months rent from the house in over six months yesterday! After a good look round we then walked back towards the canal. 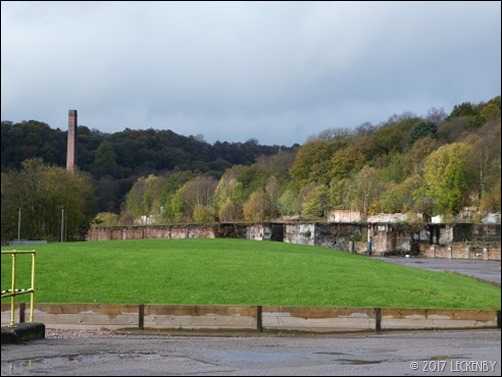 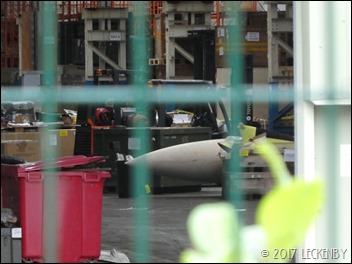 Below where we’d moored yesterday used to be a wire works, much of the buildings have long been demolished, but the sight has recently been taken over by the MOD. New looking crinkly sheds have gone up to store surplus military stuff. One of the doors was open and we could see racks of things filling the warehouse. But on the floor was the pointed cone of a missile! Was this armed? Or just an empty case? We didn’t hang around, a quick photo and we were off. 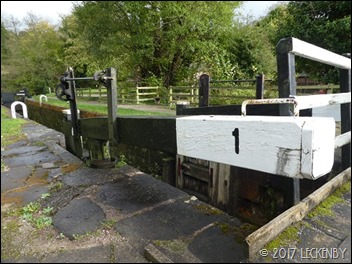 We walked round the tunnel to Froghall Basin. The top of the Uttoxeter branch heads down through a lock to a small basin where the branch now stops. This was restored in 2005 creating several 7 day moorings for low boats. Last time we were here there were a couple of boats moored up, but today the basin was empty. 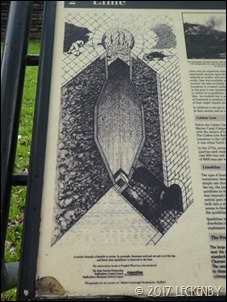 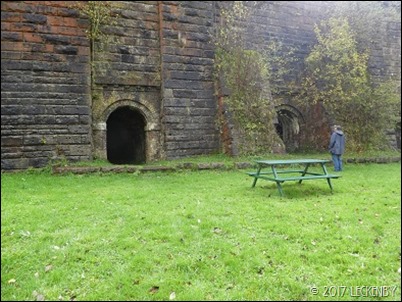 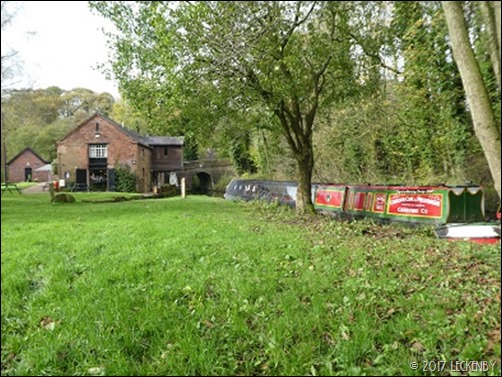 This is the end of the canal where limestone and quick lime were loaded onto boats. Large Victorian lime kilns still stand where limestone was baked to create quick lime. It has a similar feeling to Bugsworth Basin, all the noise from industry long gone still faintly echoing around the high valley sides, now drowned out by bird song. Most people today were here to sample the fruit scones at Hetty’s Cafe, what seemed like a popular place for lunch. 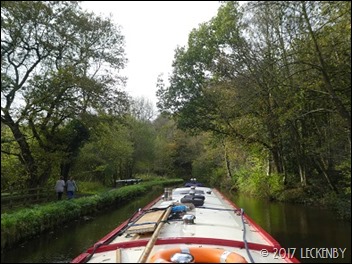 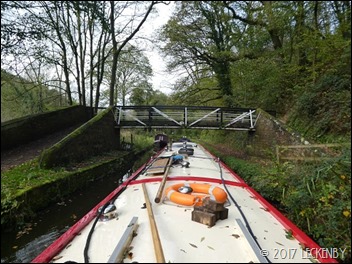 There had been no moving boats this morning and we hoped that the space opposite the Black Lion would still be free when we got back to Consall Forge. We retraced our route back along the narrows with the odd glimpse of autumnal sunshine peeking through the clouds. Two women asked the way to the pub, they had been up in the woods and turned the wrong way when they got back to the canal! 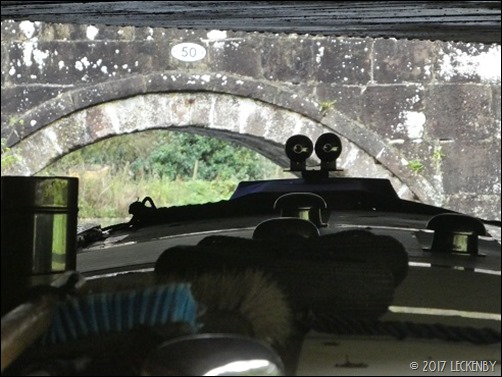 At Flint Mill Lock we came across the first boat of the day, a hire boat. They had timed their arrival very well with our exit. We were now back onto the river. At this end there seems to be no warning if the river is high, no red and green board visible. Maybe the first you would know of it would be fighting your way up stream to the low bridge. Luckily today we knew we had another inch from yesterday, but lining the boat up to go through takes a bit of doing. Once through we quickly nabbed the mooring before anyone else came by. That was us settled for the rest of the day. Shortly afterwards a Stone Hire boat came past, the chap at the helm giving a full running commentary on the narrow bridge. They were too long to join us on the remainder of the mooring so carried on down the cut. 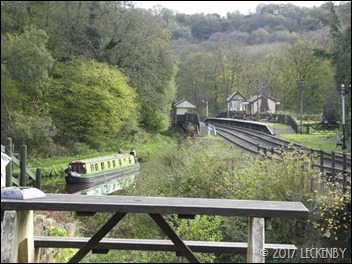 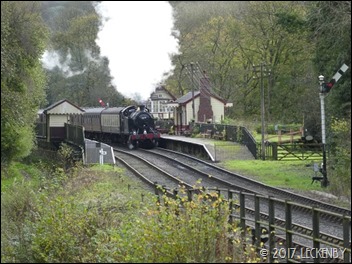 We’d promised ourselves a meal at the Black Lion, so not to be disappointed this evening we walked over to book a table. Phones, internet and TV don’t work here. This was a shame as somehow an afternoon half managed to make it’s way into our hands. So we watch the world go by sat on a bench outside. The Stone hire boat came back and took forever to line itself up with the bridge, a good 20 minutes! Then the private charter train came past too! I managed to get a photo with both the engine and Oleanna, but I’m hoping for a better one tomorrow. 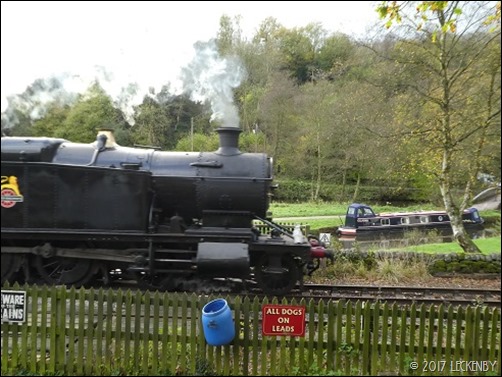 The hire boat had pulled in at the water point to fill up, they then moved backwards to free the tap up. Spikes were being hammered in and a loud conversation was going on. ‘Are you at 90 degrees?’ ‘Yes, are you?’ They were fastidiously tying up with their ropes at 90 degrees, we didn’t have the heart to tell them that this wasn’t such a good idea. Much better to tie up with your lines either as innies or outies, this means that your boat is less likely to move around when someone passes. Doing a combination of both innies and outies gives you spring lines which hold you tighter. But 90 degrees  means there is a  whole 45 degrees you can go both forwards and backwards bumping the side as you go. As little traffic was likely we left them to it. 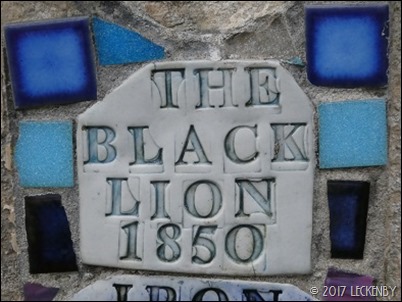 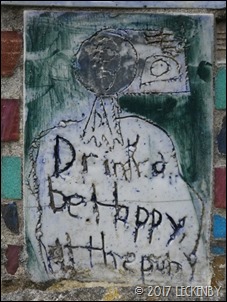 This evening we headed to our reserved table in the pub, joining the crews from the hire boats. Ribeye Steaks were on the specials board which turned out to be very nice indeed, cooked just to our liking. The chips were the best we’ve had in an age. Even though our plates had been straining we both decided to have a pudding. This was a mistake, not that it wasn’t nice, but the portions of treacle sponge were vast. I had to give up two thirds through as my sides were beginning to strain and I was concerned that I wouldn’t be able to breath soon! A very good meal and good beer too, very glad we managed to have a meal here.