Tilly had a much better night and so did we. Thank you for your concern Joa. She must have been feeling a lot better by morning as we had to put up with a LOT of ‘Open Sesame’ shouts at the back doors. Well I hadn’t finished off that tasty morsel outside and that human food just wasn’t up to scratch with pink food! We gave her a few biscuits at a time through the day which all went, the real chicken now being left. Fortunately all stayed down, so she is on the mend. Never had a cat be quite so sick before. 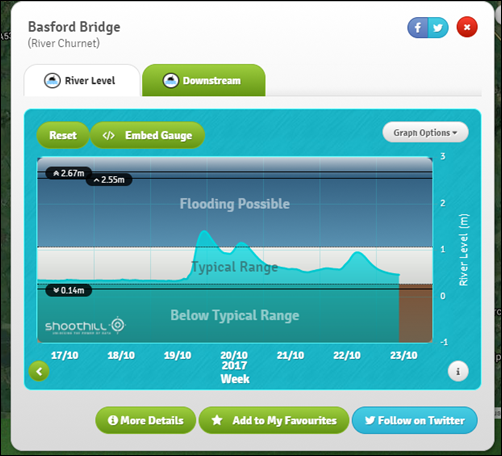 With the river levels dropping back into the normal range we decided to head to the end of the Caldon. Chances are that it might rise again so Mick headed up to the One Stop shop to see if they had any fresh veg on their depleted shelves. He timed his visit well with a delivery, but had to persuade the shop assistant into letting him buy the one cabbage that hadn’t been counted yet! So if we now get stuck at the far end we’ll be hunting for interesting things to make with cabbage. 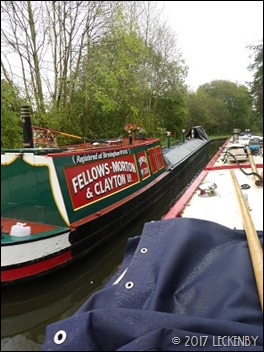 The two boats Alex had been travelling with winded and headed back up the canal, but as we left there was no sign of her, Tench locked up. Sure our paths will cross again soon.

As we reached the top of the Cheddleton Locks it started to rain, but thankfully it soon dried up. We could hear the whistles of engines again, but as far as we could tell there were no planned excursions on the tracks today. Maybe someone had hired a train privately as there was quite a bit of steam coming from an engine as we passed the station. 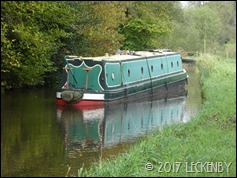 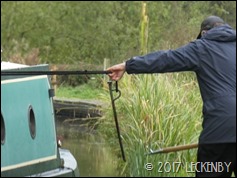 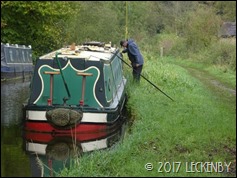 Shortly after Woods Lock we came across an unmoored boat. On Friday when we’d passed it’s bow line was in the water, stern on the rear counter and it was clinging on by it’s centre line, swaying outwards with the movement of passing boats. It waited for us to pass before it drifted out into the channel, today we had to do something about it, if we could. I held onto Oleanna as Mick went with the boat hook to pull it back in. On the end of it’s centre line was a spike with a ring (these rings are purely so that you don’t loose your spike if it’s pulled out by passing boats). This was handy as we didn’t want to be donating one of ours. Once Mick had pulled it back to the towpath he then tried to push the spike into the ground. This normally would necessitate hitting it with a mallet, but the earth being so soft it pushed in just like a hot knife through butter. With no spike on the bow line and nowhere near with firm ground this was all we could do. Suspect it won’t stay moored for long! 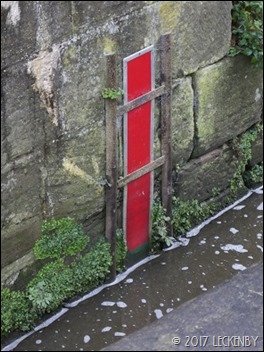 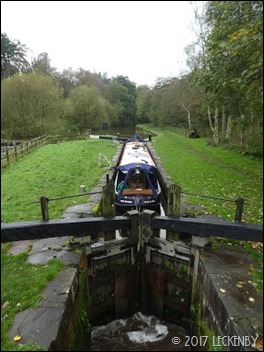 At Oak Meadow Ford Lock I walked up to check the level. It was in the green! Only by a couple of inches, but it still meant we could go. I set the lock and down Oleanna went onto the River Churnet winding it’s way through trees, then more trees, then even more. The railway line comes close at times but no trains came past. As we approached Consall Forge we pulled up and filled the water tank. The pressure here was phenomenal and we were ready to go in next to no time.

The pull towards the weir wasn’t that great today which is just as well as you have to turn just in front of it to get onto the cut. 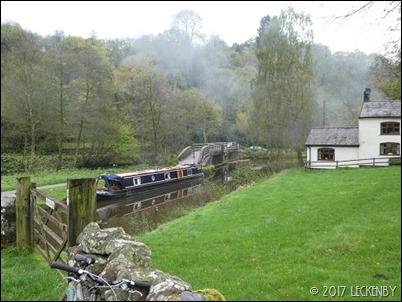 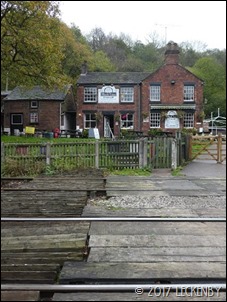 Here, empty, was the mooring that we’d been hoping for at the weekend. Opposite the Black Lion pub with the railway running in between, what a place it would have been to train watch. 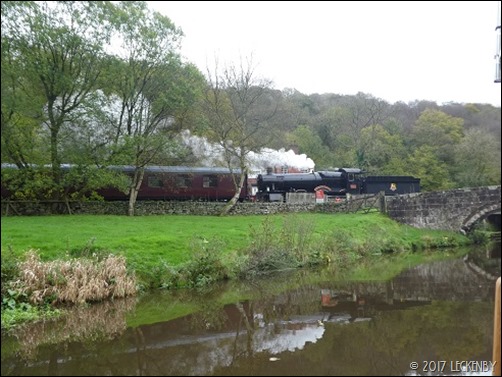 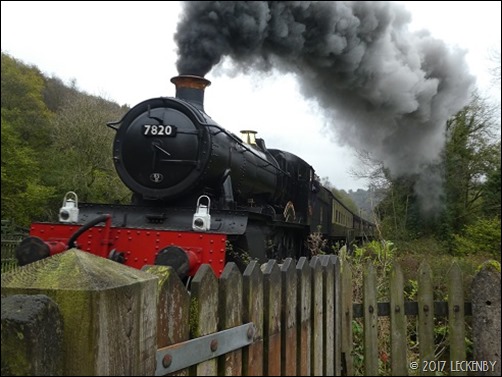 Just as we were about to sit down for some lunch a train whistle could be heard. We got that ‘needed’ train. Backing up the line with several coaches, whistling to clear the foot crossing. This just confirmed that this would have been a great mooring. It’s return journey coincided with us finishing our lunch, so we walked up to the pub crossing, the engine was now in front of the carriages. I’d really have liked to have been able to get a photo with both Oleanna and the engine in shot (my next virtual postcard to Finesse), but that would have meant being on the other side of the tracks, I was too late for this. 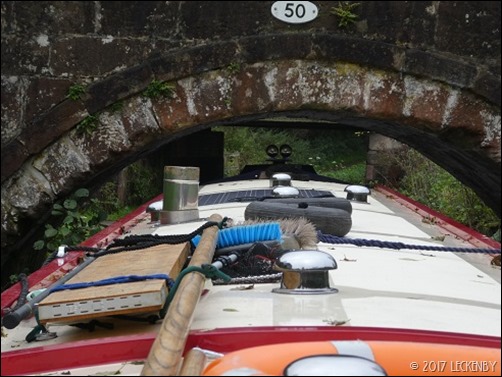 Mick quickly realised that it would be a good thing to remove the top of our chimney before we carried on. The first bridge today, I suspect, was lower than Bridge 9 had been (due to the river being a bit high). We managed to get under with no bumping it, if the water was any higher then it could have caused us a problem. 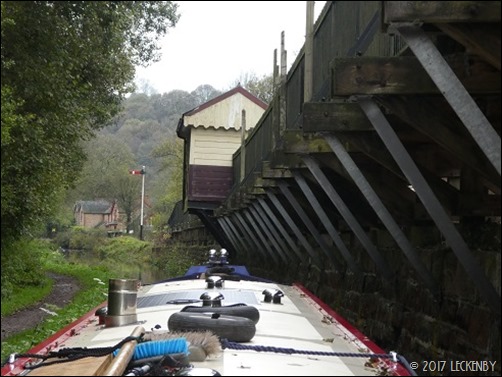 The cut takes you along side the station at Consall, where the platform is canter levered out over the top of your boat. 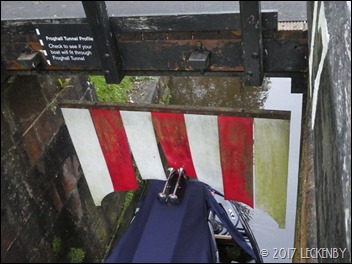 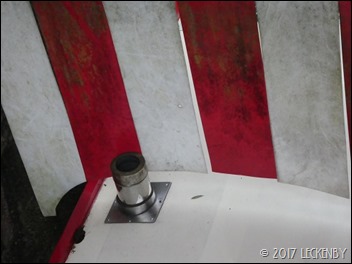 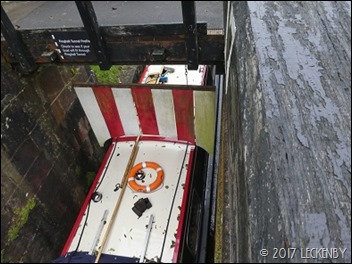 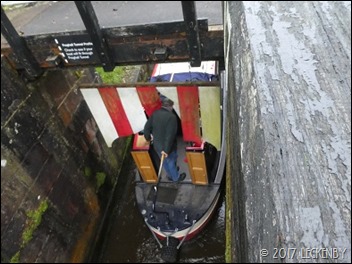 At Flint Mill Lock we caught up with a boat. As Mick brought Oleanna out of the lock we made note of whether she’d fit through Froghall tunnel. This tunnel is very low and very few modern boats are low enough. I’ve heard somewhere that it’s something to do with old boats cabin sides being made with imperial sized cabin tops and modern ones metric and those few centimetres makes all the difference. We knew we’d not be able to go through, but if we removed the horns, cratch board and chimney, back to just a bare Oleanna she would fit! Mick however would be bent double. 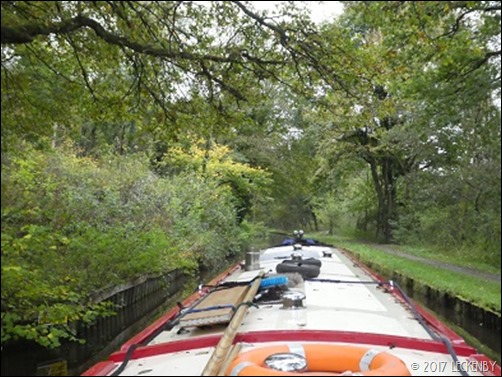 The next section is very narrow, tree lined and if the sun had been out stunning. We were glad that the boat ahead was aware that we were following. They had got to the end, winded and had just started to return when we met them. Luckily there was space for one of us to wait. We winded and moored up. After all the pretty trees and valley here is quite a let down. But after the tunnel, not far around the next bend the scenery gets better again, we’ll walk that way tomorrow. 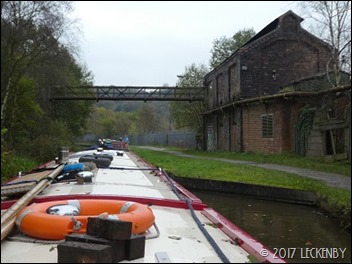 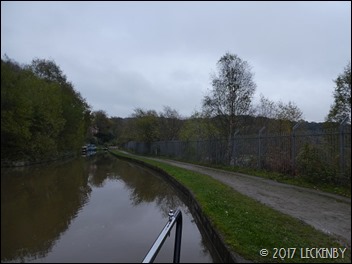 CHASC met and it was decided that Tilly should remain indoors whilst we’re here. We’d not be able to reach her should she get into trouble on the other side of the high fence and she is still recovering, so better safe than sorry.