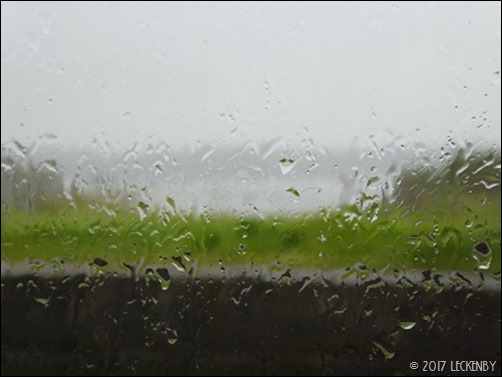 A very wet start to the day, glad we weren’t on a mission. We woke early in case Gary returned with our cratch cover, however he arrived in a lull in the rain shortly before 10am. The straps to hold the rolled openings up have been shortened and moved higher, which means that they will now sit as high as they can giving us the maximum opening to get in and out. The press studs that had been squashed in the lock have been replaced and the slight hole has been mended and reinforced. This has been done to both sides of the cover so that they match. We just need to remember to have the cover rolled up when entering locks so as to avoid it getting damaged in future. Gary left us with a pocket full of fixings and rivets should we manage to damage any of them. Thank you Gary, a speedy repair and alteration all done within 24hrs, it helped being on their doorstep. 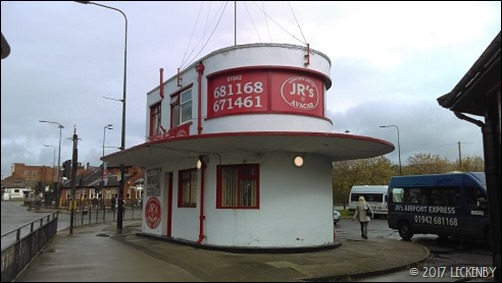 Another hour before Mick decided to brave the rain. We pushed off and pootled along in the drizzle, Mick with brolli in hand, me down below knitting. When the towpath appeared on both sides Mick pulled over and tied the centre rope. Here we could empty our yellow water tank without having to balance on wet gunnels. Once empty we carried on to Leigh where normally there is a line of moored boats just before bridge 11 where the Leeds Liverpool turns into the Bridgewater Canal. But there was only one boat, so we pulled up to pay a visit to Tescos for some fresh fruit and veg. The above building caught my eye. It was canteen/waiting room/office for the Lancashire United Tramways and used to be twice as big, designed to resemble a tram in the 1930s.

The day was drying up now, a few more miles before we wanted to stop for the day. 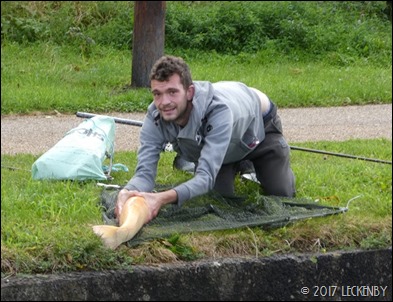 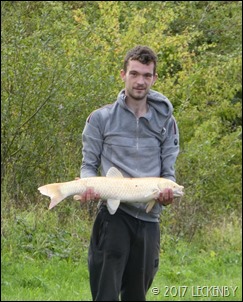 Passing under the East Lancs Road Bridge a couple of workmen pointed out a fisherman up ahead who’d just landed a big fish. Sure enough the chap was wrestling with it in his landing net and removing the hook. What was it? It was big, almost orange, a Koi Carp possibly? As we passed the chap he held it up, weighing it in his hands. As you can see it really was that big! Sadly he has no record of it and I can assure you that he did put it back in. 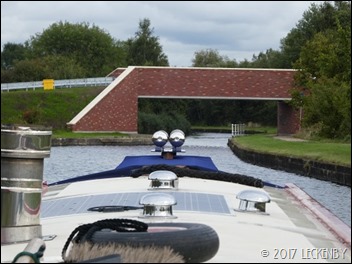 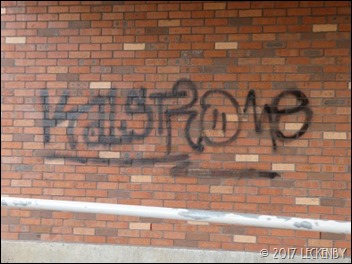 On we pootled, waiting to see if work was now complete on Vicars Hall Bridge. It was and wouldn’t look out of place in a lego set. One local has already tried to improve it by adding their tag. 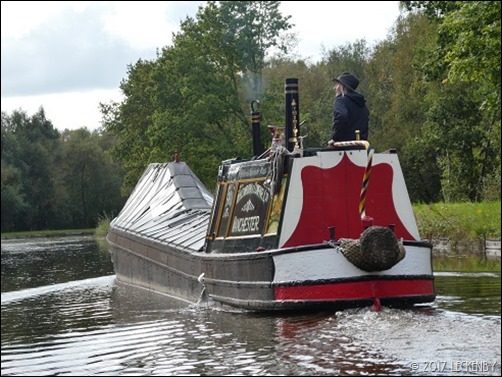 We pulled in roughly where we’d moored when we came out this way a couple of months ago. Trees on both sides, the M60 only just audible and a great place for Tilly for a few hours before dark.