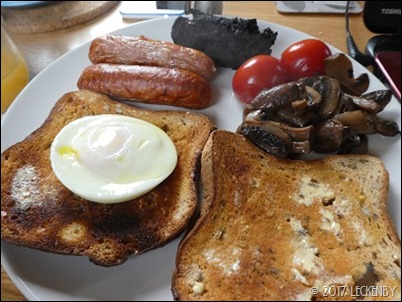 After a cooked breakfast (photo for Frank and Ade) we headed off towards Lancaster. There were a few things we still wanted to see so we waved goodbye to Blackbird for a couple of days. 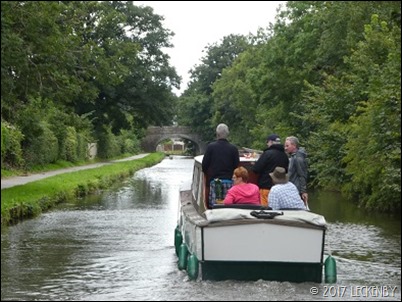 The grey morning had brought quite strong winds with it and the occasional bit of drizzle. As we retraced our route a boat came around a bend up ahead, as it got closer we realised that we knew the chap at the helm. It was Roger who is one of the original syndicate members from NB Winding Down. We hope to meet up with him before we head back across the Ribble. 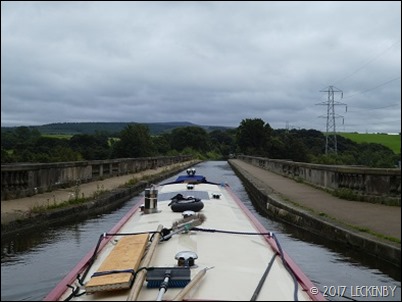 Soon the Lune Aqueduct came into view. We really wanted to have a look at it from below, so Mick had a go at pulling in to moor up. With most of the galley drawers open due to the list we decided to tie up and go for a walk. Down the steep steps to the river bank. Here we could see the five 21m arches spanning the river, the short lengths of balustrade matching each arch. Designed by John Rennie and opened in 1797 it is the largest all-masonry aqueduct in Britain. 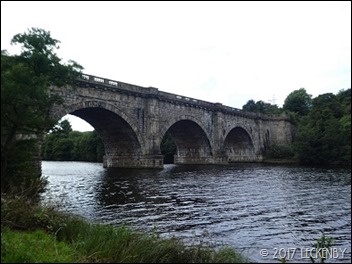 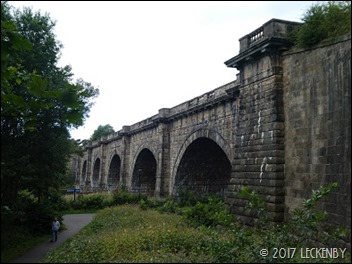 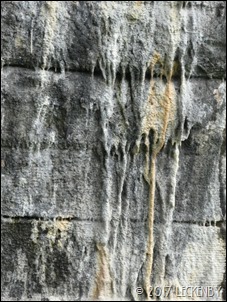 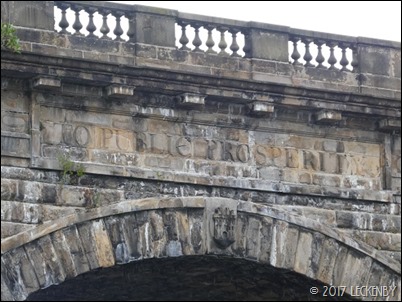 The arches support a stone trough, special volcanic pozzolana powder was imported and mixed with cement, which allowed the concrete to set under water. Looking up under the arches you can see that the structure has leaked for a very long time. The folds of stalagmites run down the arches and drip on you as you walk by. Back in June 2015 a section of the embankment south of the aqueduct had a significant leak, which necessitated a lengthy closure. Access to site was hard, the canal needed dewatering, fish had to be rescued, suitable clay was brought in from Leicestershire to mend the holes. This all took time and many boats were stranded north of the aqueduct. Today our passage was easy and it was well worth stopping to have a look upwards. 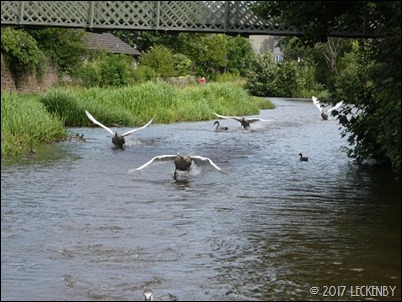 A swan and her seven offspring decided to escort us into the city. After a distance they gave up and let us pass, but this was only for them to then have a flying lesson heading straight for us. They all succeeded in taking off and all narrowly missed us when landing! 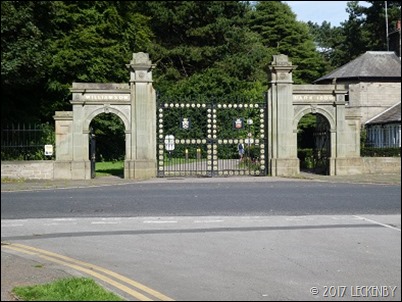 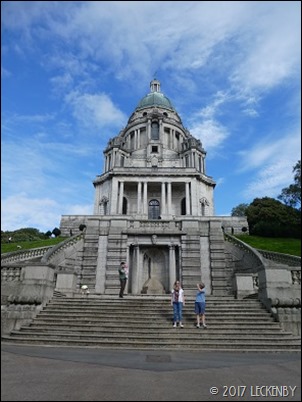 Once we’d found a space in the moorings we walked up the hill behind the canal. Our destination kept bobbing up above the tree line and reminding us which way we should be heading. Williamson Park occupies the highest hill in Lancaster. At it’s highest point stands the Ashton Memorial. Commissioned by Lord Ashton as a tribute to his late wife it was designed by John Belcher and completed in 1909. It dominates the skyline of Lancaster and when close to it it draws you in and up the steps on the west side. 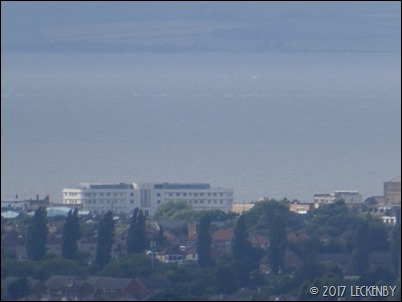 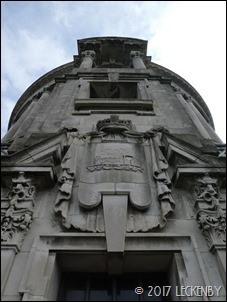 The interior has been restored and now hosts parties and weddings. Climbing up more steps to the viewing balcony gives you fantastic views for miles. We could see Blackpool Tower, The Midland Hotel in Morecambe and right over to Grange-over-sands. Quite a sight. 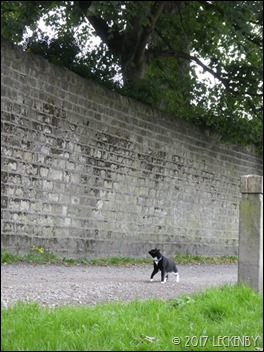 However my sight of trees on top of a smooth wall was not so good. No matter how much I shouted at it there was no way to climb to the top. The gap was too big to even jump from the roof of the boat. So instead I’ve had to amuse myself by running through the boat.

2 thoughts on “Back to Lancaster. 28th August”