Tewitfield to Limit of Navigation to Carnforth Services 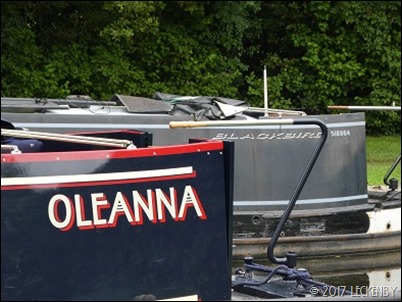 This morning Oleanna and Blackbird conquered the north. 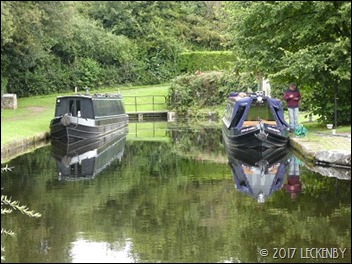 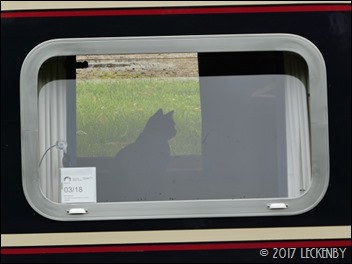 We both winded and then reversed in to use the services at the end of navigation at Tewitfield. This is the furthest north in the country that you can get your boat on the canal network. If the locks up to Kendal ever get restored then there will be another 14 miles of canal heading further north.  Both boats celebrated by topping up their water tanks and disposing of some rubbish. This now means that we have to conquer the south, west and east most points of the canal network. West is Llangollen, South is Godalming and East is Brandon Lock on The Little Ouse.

Our night at Tewitfield had been a noisy one, the motorway never sleeps. So a plan of getting a bus into Kendal will now happen from somewhere further south. With visitors due today we set off first and retraced our way back to Carnforth. A load of washing had been done before setting off to make use of a sunny day and a Dorset Apple Cake was popped in the oven, having visitors gave me an excuse to bake. 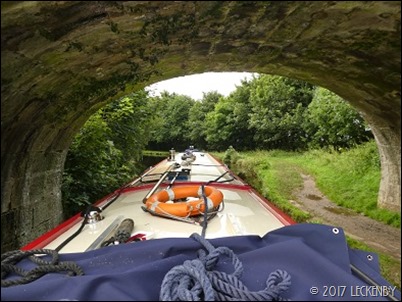 Meeting an oncoming boat at the permanent moorings in Borwick wasn’t so good. There was only just enough space for us to pass, that was after we’d found the limitation of how far we could get over to the side! Then further on the shallow water caught Mick out, it seemed like we were mid channel, but the shallow water extended right over and we bumped and grazed over into deeper water. 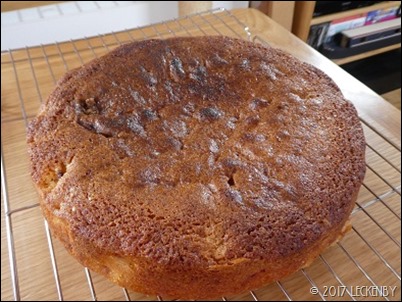 Back in Carnforth we tried pulling in before the services. Oleanna came into the side, but on a list, so we moved up and took the mooring that Blackbird had had yesterday morning. Washing hung out and a quick tidy up. The doors were opened and Tilly could come and go for the remainder of the day. 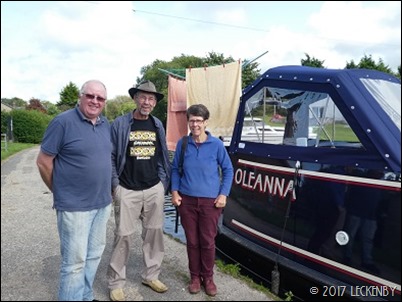 Our first visitors were Sue (Mick’s cousin) and Sefton, who live near Lancaster. We hadn’t seen them for about six years, so it was nice to spend a couple of hours catching up on their side of the family, drinking tea and eating warm apple cake. It’s been a while since we showed people around Oleanna, so we weren’t quite as word perfect as we’d been in London. Thank you Sue for the courgettes and the tomato and basil sauce, they will go down very well. 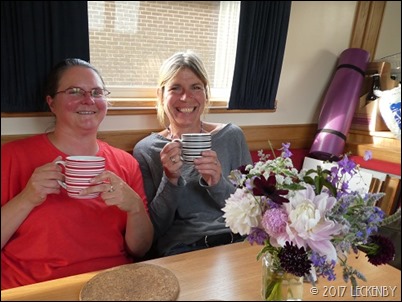 Later in the afternoon we were joined by Becky who lives even closer only a mile and a half away. I know Becky from my Scarborough days, she was a favourite actor at the SJT. One Christmas she rented my house that was on the digs list and I had the pleasure of designing a full blown squirrel costume for her to wear in the original production of Improbable Fiction. She now spends much of her time arranging flowers that she has grown herself. Today had been her first funeral flowers and on Saturday she has her first wedding bouquets. A lovely jam jar of flowers arrived with her, which will sit on our table until Tilly has disposed of them. Well such things are always outside where nobody notices me batting them. 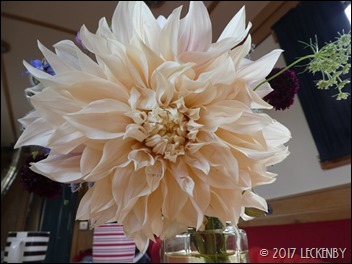 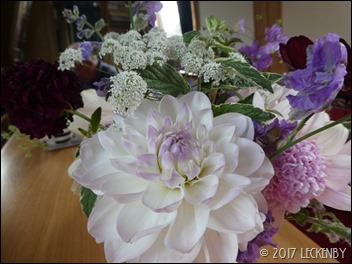 A lovely day catching up.