The last two days we’ve had a trip to Scarborough. Dentist for Mick and another blood test for me. The nurse at the surgery smiles with glee when I roll up my sleeves, she says she likes my veins. This worries me.

We hired a car this time as it was only a fiver more than a van for two days and would give us some more comfort for the journey right across the north. So yesterday we headed east leaving Tilly with plenty of biscuits they nearly forgot! and an emergency key with Bridget. I did warn her that if Tilly stuck her paw out of the bathroom window and shouted to just ignore her, she tries this on with passers by for sympathy, but it doesn’t wash with us. 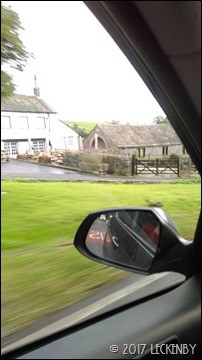 Which route to take? A66 and then down the coast, A59 or M6 then M62 across. In the end we opted for the A59 which gave us the opportunity to spot places we knew along the Leeds Liverpool Canal, passing signs for Bank Newton, Gargrave and crossing over the double bridge at East Marton instead of going under it. We left the drizzle behind us and soon had sunshine on our way to the coast. First stop was Sainsburys for some lunch  where we bumped into our friend Dawn and were invited round for a cuppa after we’d got various things out of the way. 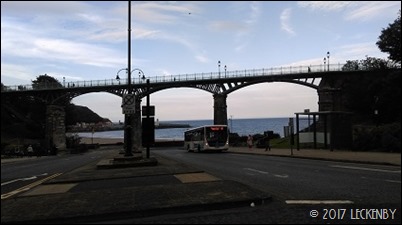 After the dentist we headed to our house to see how the builder has been getting on with digging up the kitchen floor. As we pulled up it was obvious that our tenants were going to be on hand as well. The work in the kitchen has taken some time and the builder, as builders do, hasn’t always turned up when he has said he would. Concrete has taken time to dry, a totally rusted through down pipe caused him to have to spend time on that. So our tenants have been waiting to get new carpets laid now for weeks. Here’s hoping that soon everything will settle down, water will stop finding it’s way into our house and we can stop spending money on it. Luckily when we had the two kitchens knocked together we got quite a few extra slate floor tiles which I didn’t manage to sell on ebay. So the builder has been able to replace the ones he’s had to take up, however there are a few chips on the ones next to where he’s working. It was good to be able to put faces to names of our tenants and hopefully we made the right noises to them. They are looking after the house and garden wonderfully, just a shame that the blue geraniums were thought to be weeds and have been cleared from a flower bed, they are however showing signs of fighting back through some gravel. 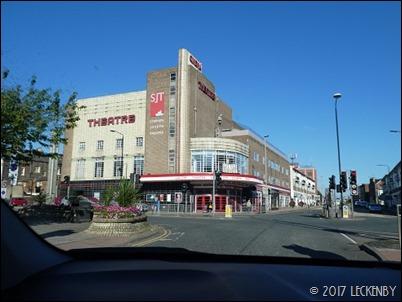 Next port of call was to catch up with Dawn and Lee. We have stayed with them a few times since we’ve been living afloat. A catch up on gossip around Scarborough and hearing news of all our friends over a couple of cuppas, a better way to spend the afternoon than looking at concrete and digging out tins of paint. Then we moved on to visit Jaye and Duncan. 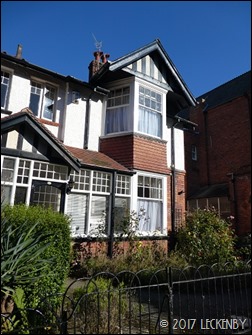 Just about a year ago we were in Scarborough, for another blood test, and we happened to coincide with Jaye and Duncan’s final possessions going into a van. They were leaving Scarborough to live in Grassington in the Yorkshire Dales. They have had a great year but for various reasons have just moved back. Two weeks ago they got the keys to their new house, which is actually old, an Edwardian semi. Now in a different part of town where large houses cling to the sides of a valley leading down to the sea, when I first moved to the town I coveted these houses. Some are storeys and storeys high with seven to ten bedrooms, however Jaye and Duncans isn’t quite so large. 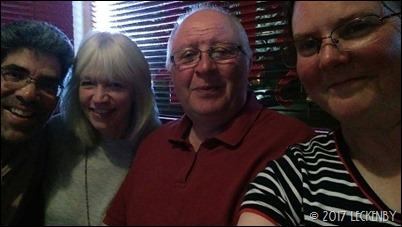 We had a full guided tour of their lovely house. Many original features and with a bit of TLC and it will be a stunner. A bottle of fizz was opened to celebrate being their first over night guests. They hope to come and stay with us on Oleanna soon and be our first over night guests. There was a lot to catch up on, so we headed to an Italian restaurant, so that we could all concentrate on our news. Two more bottles of wine and a stagger back down the hill to their house. What a lovely evening, catching up with them. I have to say that as Duncan is an avid reader! 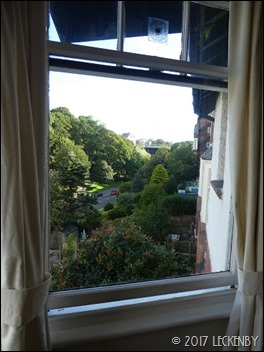 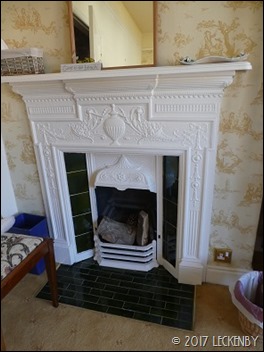 Waking this morning in a large bedroom where your toes don’t touch the wall opposite was strange. Not having to clamber over Mick and Tilly to get to the bathroom was also odd. The seagulls had managed to only be there in the background for atmospherics through the night which  was a relief. Both Jaye and Duncan were working people today, so we said our goodbyes and headed across town for my appointment with the vampire. A call into the letting agents to see if they could chivvy the builder along and then we could have breakfast. 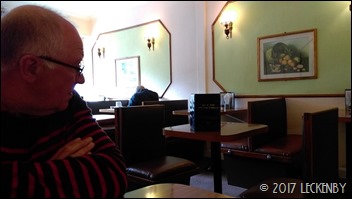 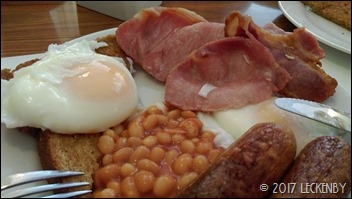 Despite Mick living in this part of town for over twenty five years he’d never stepped foot inside Pic a Dish, coffee lounge and restaurant. We’d opened the door on  a time warp.Two people sat at separate tables with mugs of tea and some toast reading papers. This could have been any time since the sixties. There was only one breakfast to order in such a place, a two egg breakfast including tea and toast all for £5.25. It was exactly as we expected, good coffee lounge cafe food. No posh sausages with herbs, soda bread or field mushrooms, just straight forward breakfast. An hour before this would have been very frowned upon, but the vampire already had my blood, so no-one would know other than us.

With the car pointed westwards we started heading back to Garstang. A pause was in order for me to pick up some more of my morning tea from the Designer Outlet in York. We then chose to return by the M62 which was quite a bit quicker than the route we’d taken yesterday. 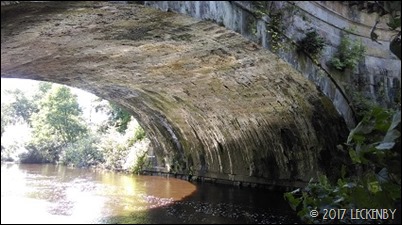 Mick had ordered some filters for the next service from Chandlery World which is based at the marina here, so we called in to pick them up. Easier said than done. Mick had had an email suggesting that they had been sent to us, to London, to my brothers, at our correspondence address. The ladies looked for them, but quickly remembered that a parcel for Mick hadn’t gone in the post yesterday, it had gone to the post office today. Phone calls were made and then one lady jumped in her car. We looked at just about everything in the shop before she returned. Our parcel had made it to the post office but hadn’t made it into the system. She was allowed to collect it despite not being the person it was addressed to. It even had on the label that we’d be collecting it.

Once the car was returned to Preston we visited all three supermarkets. Booths out of curiosity, then Aldi followed by Sainsburys to fill in the gaps. Tomorrow we will wind, fill with water and carry on northwards with NB Blackbird. We need to find a mooring close to a road so that our covers can be delivered to us on Thursday.